Maybe we IsamBards were off our trolleys, holding a poetry walk through Upper Horfield estate on a hot August afternoon ... 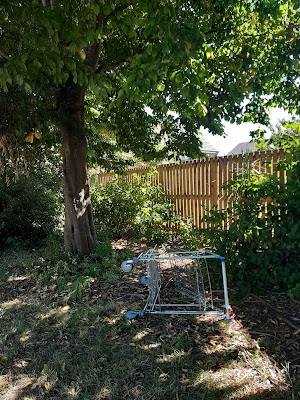 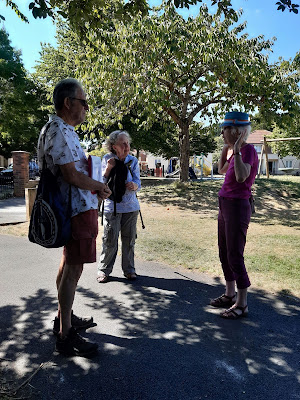 ... but it's something I'd wanted to do for ages. I first mentioned it to the Northerner probably back in about 2011, as a possible outreach event for one of the poetry festivals, but actually, I'd been fascinated by the poetry streets, where my father grew up, since I was a child.

The Northerner's response back then was 'well, go ahead and organise it'.  I suppose I could use the excuse that the entire estate was being rebuilt at the time as an explanation for why it took so long, but the construction work was completed in 2013. Any delay was largely just a matter of me not pulling my finger out.
But finally here we were, in Poets Park, waiting for our audience - always a nerve-wracking moment. But they arrived, and what brilliant listeners they turned out to be. 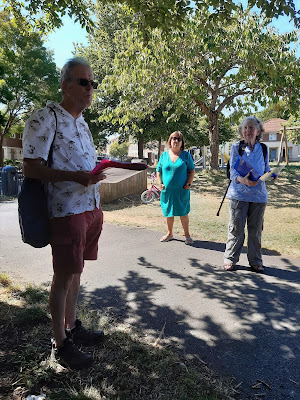 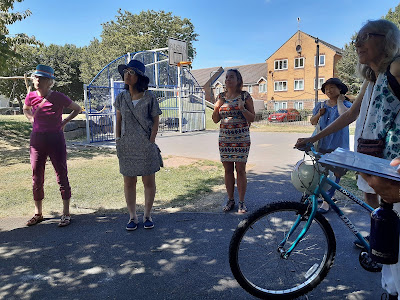 For the first time, in addition to our own work, we were reading poems by other, famous poets, namely those after whom the streets are named, as commemorating them was the main purpose of the walk. So in the park, which is on Eliot Close, we read 'The Rum Tum Tugger' from T S Eliot's 'Old Possum's Book of Practical Cats' and, as we were within earshot of  Larkin Place, Philip Larkin's melancholic poem, 'The Trees'. 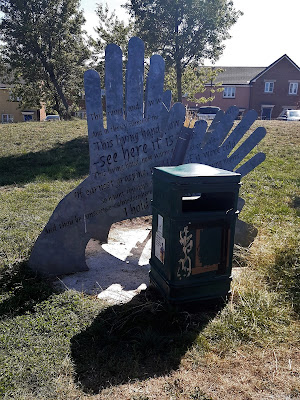 Our next stop was Auden Mead, near Keats Close.  The installation here, which was designed by local school children and is inscribed with lines from John Keats' memento mori, 'This Living Hand', took on a life of its own in the run-up to the poetry walk. I tweeted my indignation about the positioning of litter bin bang in front of it, making the poem impossible to read without getting a whiff of dog poo, and it was picked up by the Bristol Post, an interview ensued and suddenly Angry of Bristol's diatribe got some traction.*

The obvious poem, then, to read at this point was 'This Living Hand', which is fragmentary and very moving, written in 1819 when Keats' health was failing as a result of TB. He was to die in 1821 at the age of 25. 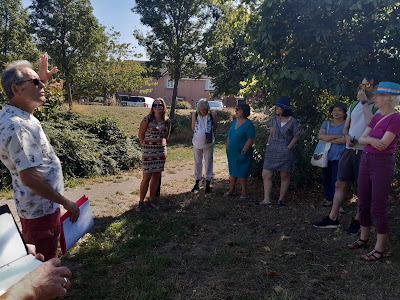 Since we'd just walked up Shelley Way, we also read a few verses from Percy Shelley's 'The Mask of Anarchy', with a rousing 'Ye are many - they are few!' to end it, while Dominic read W H Auden's 'Refugee Blues', which is more poignant and pertinent than ever. 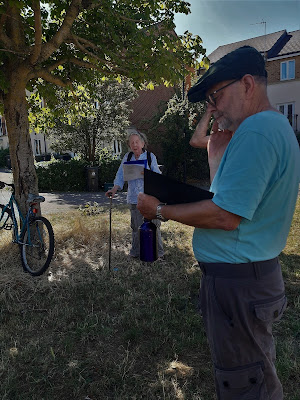 On then to a little grassy spot on Thackeray, via Shakespeare Avenue, which prompted some Bard-related poems, and, in anticipation of our walk down Hughes Gardens, David's poem about his mother-in-law going fishing on the River Exe with Ted Hughes. And as we were just a street away from Macauley [sic] Road, where my father grew up in the 1920s, I read a poem not by Thomas Babbington Macaulay but me, about my grandfather and father's experiences of the first and second world war respectively. 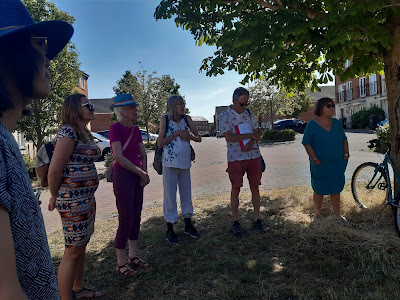 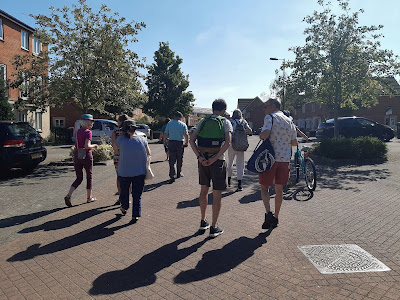 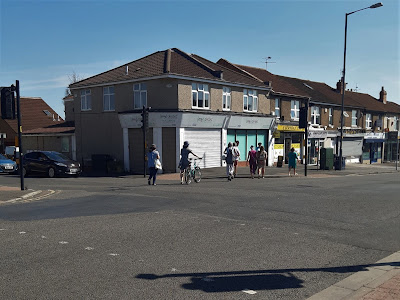 ... and poems about Wordsworth and Coleridge, whose streets are somewhat further afield than the route of our walk permitted us to explore.  Coleridge was particularly relevant here, given that he used to make an 80 mile round trip on foot between Nether Stowey, north of Bridgwater, to his nearest lending library, which was in King Street, Bristol. Thanks to its Friends, Horfield library is still going and residents are spared that effort ... for now. 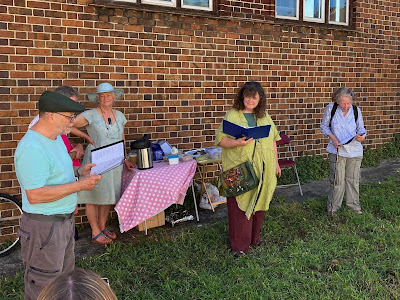 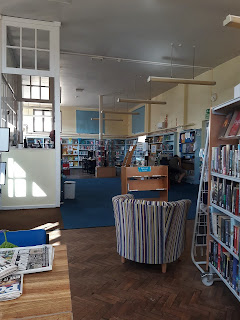 * If you think the Council should move this bin so that this installation and its poem can be appreciated properly, please contact its parks team. There’s a page on the council website called ‘Improve a park or green space.’ The name of the park is Auden Mead and you don't need to be a resident to make your suggestion.
Posted by Deborah Harvey Poetry at 22:43