I was born into a very large Bristol family.  My mother was the eldest daughter of thirteen children, eleven of whom survived to go forth and multiply.  As a result, many of my earliest memories are of being surrounded by a throng of people who looked like me and sounded like me, but whose exact identities were lost in unholy confusion.


My grandmother was the heart of our family; her modest Victorian villa the place to which we would all gravitate.  When she died at the age of 93, we realised that unless we all made an effort, we would lose that close family connection we'd always taken for granted.  And so we took to hiring a hall once a year, on the Saturday nearest her birthday, to throw a large, raucous party.


Yesterday was the 113th anniversary of my grandmother's birth; tomorrow we shall again flock to fill the genteel suburban avenues of Stoke Bishop with hail-fellow-well-mettery and hullabaloo.  This is a poem I wrote about our gathering, dedicated to my once and future kin:

Every November they gather together,
raggedy black with petroleum sheen
and sparks in their feathers.

Most live local,
drifting from suburbs like bonfire smoke,
although others hurl in from further afield,
storming up songlines,
until, like a genie freed from a lamp,
they swirl, and set the sky alight
with their crackling dance.

A parliament of starlings,
cacophonous cousins,
an argumentation of uncles and aunts!

Then one venerable elder
hunches his shoulders, opens his throat
and lets fly a hymn in notes
grown richer over years,
swelled by a hundred kindred voices,
all singing in different keys
their shared story. 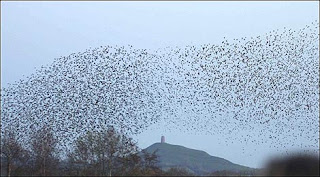 Kin will be published in my forthcoming poetry collection, Communion, due to be published next year by Indigo Dreams.

The Power of Poetry

There's a huge old pear tree in my garden.  As it towers over the boundary between my and my neighbours’ garden, it’s tempting to conclude that it was planted in 1939 when the farmland it stands on was parcelled up into plots and turned into suburbia.  It looks so venerable, however, that I fancy it has flourished here far longer.
For all its gnarled beauty, it’s been a bit of a disappointment over the years when it comes to fruiting.  The pears are large, golden yellow and good to eat and stew, but the harvest is generally meagre.  What’s more, the tree is infected with scab and large numbers of its pears develop crackled skin and chocolate brown patches.  Most autumns, by the time you’ve cut the bad bits out, there’s barely enough to make more than a couple of pear crumbles. 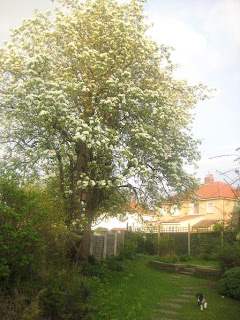 Last year, we had a strange but memorable Easter.  I was newly single, the kids fatherless.  To fill the gap left by my husband’s departure we’d acquired a boisterous border collie puppy who had yet to receive all his inoculations and was thus confined to base along with the rest of the family.  My dear friend Teresa arrived with a suitably shaped Easter present which was, in fact, a large iron cannon ball I’d long coveted and she’d managed to rescue from imminent skippage.  And the pear tree was in glorious, incandescent blossom.  All of this combined to give me a first glimpse of a better life, and I preserved that feeling of optimism in a poem to help me through the dark days that still lay ahead.   The fact that it subsequently won a prize in the 2009 MsLexia poetry competition was an unexpected bonus.
It was a pacific spring with little wind to strip the blossom and so, unusually, we had a glut of pears come September.  I duly stewed as many as I could store in my freezer, and gave away bucketfuls to my neighbours.  The remainder were left for foraging birds.  I briefly wondered if the tree had responded to my poem, in which I’d disparaged its bounty.  At any rate, it would surely be a long while before such abundance were repeated. 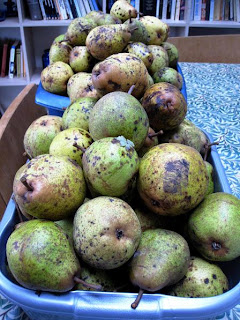 This year winter was hard and spring came late.  Our tree blossomed, but not spectacularly.  No matter, I still had tubfuls of frozen fruit left from the previous year.  Except that all this autumn pears have tumbled from the sky.  I gather them by the bowlful, and as I walk back into the house I hear more dropping, while still more hang from the branches like glowing lanterns.  Every night I stew a vast panful in diet lemonade and crushed ginger, while my youngest son and I are reduced to eating ancient chicken kievs of dubious provenance and fillets of frost-burnt fish in a bid to make space for yet more containers of the stuff.  Money might be tight but we shan’t starve this winter as long as we can continue to stomach porridge with pears; and pear cobbler; and butterscotch pear crunch; and pear walnut muffins; and French pear pie; and pork chops with pear chutney; and pears with spam and pears; and pears, spam, pears, pears, bacon and pears …

The Wedding Tree
In autumn she huddles old bones
against the equinoctal storms,
discards a parsimonious harvest
of tarnished pears with crackled skin,
fit only for starlings.
A crabbed munificence I’ve forgotten
in this ragged April dawn
as she spreads her blossom-clotted arms,
as white,
as mad as Miss Havisham’s ghost,
and strips herself of wedding petals
at the insistence of the wind.
Watered silk and crimson seed,
throughout this Easter perfumes
bleed into my days.
And in a blessing of confetti
I am purified of love,
and rise,
a bride to the remainder
of my life.
Deborah Harvey © 2009, 2010