A Biscuit Tin by the Sea

If things had gone according to plan, I’d be half way to by now for a fortnight’s stay in my family’s caravan on a site between Teignmouth and Dawlish. A blow-out on the A46 just outside the while I was on my way to pick up my son from his college in Dilton Marsh put paid to that, and tomorrow morning will be spent at the local tyre fitters. Then it’ll be a question of waiting until the traffic thins before we venture down the M5. I’d sooner drive in the dark than spend the first day of our holiday stuck in jams.

This part of is home from home for me, my parents, maybe even my kids though they’d never admit it. In 1960, the year before my birth, my father walked onto the beach at Shaldon for the first time and immediately decided it felt like home. It was another 35 years - and as many summer holidays, not to mention stays at Easter, Whitsun and October half-term - before we discovered by chance that it really was home to our ancestors in the early 19th century. Almost all of those sojourns, and every single one since, have been spent in caravans on the same site, and whilst I might occasionally yearn for luxury hotels and holidays abroad that I have no hope of affording, actually I love the moors, both coasts and all the bumpy green bits in between. Another 35 years of exploring would still leave places of beauty and interest undiscovered.

The caravans have changed a lot over the years. Our first one was the only van on the park with a view of the sea, glimpsed between the great dark elms that marked the bottom boundary of the field. Now almost everyone can see a sweep of in all its colours and moods. It had no electricity, and therefore no fridge or telly. Once they were invented, I’d take a tape recorder down with me, but we could only ever afford one set of batteries and they’d last approximately two days. There would then follow two more days of Leonard Cohen sounding even more lugubrious than usual as their power waned and (to my parents’ relief) failed. Light was provided by gas lamps, which gave out such a dim glow that my mother would stop my sister and me from reading for fear of straining our eyes and we’d have to sit and look at one another for the rest of the evening. Water was collected from a stand-pipe and heated on the stove, and the toilet block was a sprint along the drive, often in the teeth of a gale. Whole days of rain were spent on games of patience and jigsaws while I waited for the hiss of Triumph Herald tyres that would announce the arrival of my cousins, who had a caravan one row up and a few doors down. (I try to tell to my kids all this but they can't hear me above the Playstation or Family Guy DVD.)

Some things are the same, though. Being awakened at six in the morning by tapdancing seagulls. Basic meals that always taste better than anything cooked at home. Red cliffs meticulously embroidered with wild flowers. The lowing of cattle, and the sound of passing trains drifting up from the sea wall when the wind’s in the right direction. Bats in the lane and lit ships on the horizon. Dozing off at night to the hooting of owls.

Best of all, there’s the sense of living half indoors and half out - close to the elements and the animal world. Full moons are impossibly big, stars brighter than anything with its orange skies can offer. The clouds are mountains on the other side of the water. Thunder storms are louder and scarier, yet there’s also the increased sense of security that comes from being cradled by nature. Simple living in tune with the seasons. You can’t beat it. 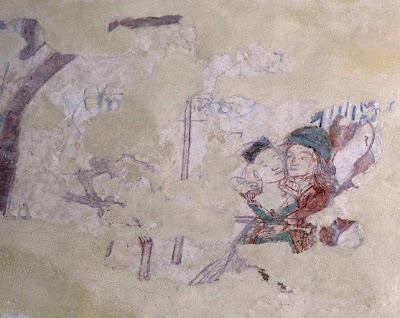 My first collection of poetry, which is being published in early 2011 by Indigo Dreams, is called ‘Communion’. The title comes from a poem of the same name, which I wrote after visiting St Winifred’s Church in Branscombe, . But it’s neither a theological discourse nor a homily. Communion is a poem about the pleasures of the flesh.

Just opposite the doorway of St Winifred's, towards the rear of the nave, are the remains of a 15th century mural, believed to have depicted the Seven Deadly Sins, although only Lust has survived the depredations of Henry VIII, Oliver Cromwell and those restoration-crazed Victorians. The sinning couple are shown in each other’s arms, while a skeletal Devil standing to one side is running them through with a lance. Not that this seems to bother the lovers at all. Both are intent upon the other.

It was this defiant pleasure, this communion, that I wanted to celebrate. I imagined them partaking of each other in other churches I’d visited, from Wells Cathedral choir with its sumptuous embroideries and the worn stone steps of its Chapter House, to St Enodoc’s, a tiny Chapel of Ease in Trebetherick, Cornwall, which, over the course of three centuries, filled completely with sand and was known locally as Sinkininny Church. Its graveyard is now the last resting place of Sir John Betjeman.

Apparently, churches were major pulling-places in the past, and when I saw the high-walled Georgian box pews in in , I could easily picture the illicit fumblings that might have gone on there, out of sight of the rector and the rest of the congregation. I’m a coward, though, so in my poem the couple’s final act of communion takes place ‘beneath the fan-vaulting of trees’ (although you could argue that the cathedrals that are our woods and forests are the most sacred places of all).


The word 'communion' has a more general meaning, however: namely, a coming together to share what we have with others. To me, a lover of the written word, it encapsulates the ability of poetry to leap the chasms between us, to let us know we’re not alone. That's the spark of recognition I would love to strike in people when they read my poems. That's why I share what I write.


It’s these layers of meaning that prompted me to call my collection 'Communion': the sacred and the profane, all mingled together and holy as hell.

Posted by Deborah Harvey Poetry at 21:52 No comments: