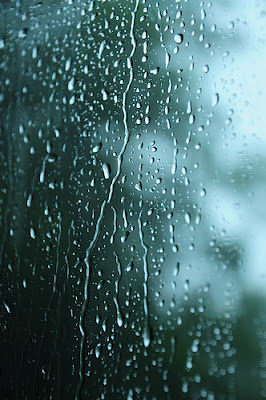 Five and twenty past the hour
on a non-existent day
without a season.
An early evening rainstorm
chases molten silver mullions
down each westward-facing window.

For a while I watch it claw
the warp and weft of beaded gauze
blinding a scenery of tarmac, concrete, cloud.
There are landscapes in the rainlight:
glassy worlds meander
in a random stream,

encircle tumuli and earthworks
of a long-forgotten past;
snail trails
becoming frosted footpaths
over empty, unlit hills
from which a people with our faces

traced the swathes of ancient stars,
augurs of when to sow and reap.
I cannot wrap myself in their dreams,
only recognise and keep
a thread of memory
to make this weave complete.

My poetry collection, 'Communion', published by Indigo Dreams, £6.99 is available from the Indigo Dreams website, Amazon, W H Smith on line and all good independent bookshops.  A selection of my poems are available to read here.

Posted by Deborah Harvey Poetry at 17:04 No comments:

King Lear at the Tobacco Factory

One of the first signs of spring in these parts is the return of Shakespeare at the Tobacco Factory, doing (in this first production at least) what it says on the tin.  This year they are kicking off with King Lear, with John Shrapnel in the role of the ageing king whose narcissistic folly unleashes a tragedy of savage proportions. 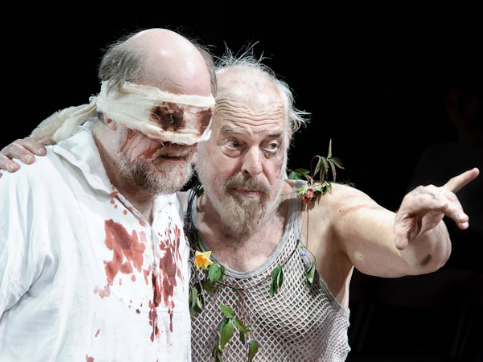 It's had mixed reviews, the main criticism being Andrew Hilton's direction, but I found it mesmerising, owing in no small part to its intimate setting which serves to bring the audience right into the action.  There were stellar performances from SATTF regulars and some new faces, though I would single out Trevor Cooper's moving portrayal of the blinded Gloucester for special mention.  My only quibble was the change in style of costume in Act IV, from traditional Jacobean to World War I type uniforms, which didn't seem to add anything to the production and which I found distracting.

Having seen SATTF's interpretation of 'Uncle Vanya' (confusingly by Chekhov and at the Bristol Old Vic!) a couple of years ago, I'm really looking forward to their production of 'The Cherry Orchard' (one of my set texts at university) in April, as well as the new leaves and blackthorn blossom and daffodils which are surely about to burgeon now Hilton and his team are back.


Posted by Deborah Harvey Poetry at 12:39 No comments: 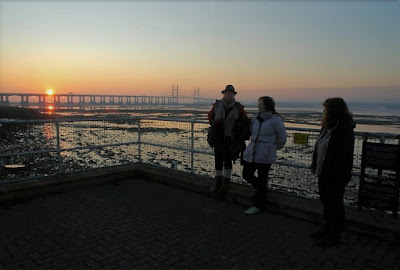 ... because the starlings that always do their swirly starlingy thing at New Passage on the Severn were a few miles upstream tonight. And it was bloody freezing! But the company and views and the sunset were well worth the frozen noses and toeses.

Posted by Deborah Harvey Poetry at 20:18 No comments:

The final version of the map of mediaeval Dartmoor, drawn for my novel, 'Dart', by the wonderfully talented artist, Dru Marland! 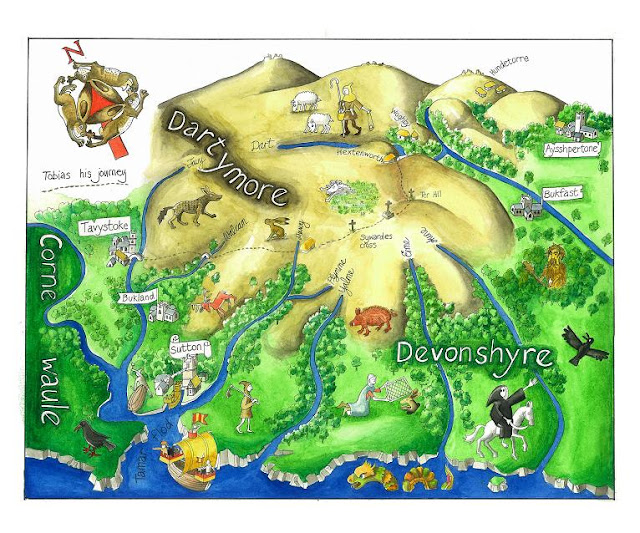 'Dart' - the story of a family living on Dartmoor during the time of the Black Death - will be published by Indigo Dreams in October of this year. My poetry collection, 'Communion', is available now from good independent bookshops, Amazon and the Indigo Dreams website, price £6.99 or less. 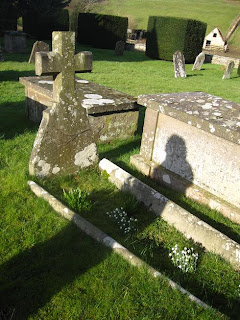 Dru and I went off on another business trip last weekend to see if we could persuade any local-ish independent bookshops to take our wares.  We were hoping for more success than the last time we tried in Clevedon.  In the meantime, I'd acquired a nifty grey portfolio with pockets to hold my packs (consisting of my poetry collection, Communion;  ordering information; a photocopied review; and a large postcard with contact details) rather than stuffing them haphazardly into my trusty brown bag.  I felt almost professional.

First stop, Sodding Chipbury (as it is affectionately known in these parts).  An inordinate number of gift shops but no book emporium.  Dru and I got the feeling that it was trying to slip under the radar and into the Cotswolds, but it would need A LOT MORE antiques shops to do that.  And at least some of those wonderful slate tiles like fish scales instead of ridged clay ones. 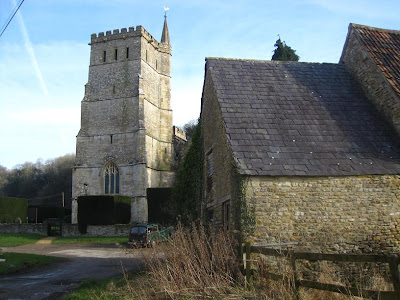 On then to Wotton-under Edge, stopping off en route at Hawkesbury Upton.  We liked the look of the Church there with its solid fortified tower but we couldn't get inside because it was locked.  Never mind, the churchyard was interesting.  I loved the grave above, with new life and the Shadow of Death.  Or rather Dru.  And the Morris Traveller looking oh so picturesque.  (There - in front of the church, cunningly disguising itself as a yew hedge.)

Joy of joys - a bookshop in Wotton (which, incidentally, is one of my favourite small towns in the area - a proper place with proper shops, the only blot on the landscape being the inevitable Tesco Express on the high street.  If I never get to move to Dartmoor, a cottage in Wotton would soften the blow a little).  Only the bookshop was shut for lunch from 1pm to 2pm.  We looked at our watches.  Five past one.  We would have to return later.

Our next stop was Nailsworth, en route to which we passed more snowdrops, these as tall as wild daffodils.  We knew there was definitely a bookshop in this pleasant little town and yessssss, it was open.  The woman inside was very friendly.  She told us that Jenny Joseph lived locally and was a frequent visitor - definitely old enough now to wear purple, but in fact she generally dressed in tweed.  And she was interested in my poems except the shop owner, a man called Hereward Corbett, was in the sister shop (also called The Yellow-Lighted Bookshop)  in Tetbury and maybe we should go up there.  'He's very nice,' she added, as I lugged my still heavy portfolio back out to the car. 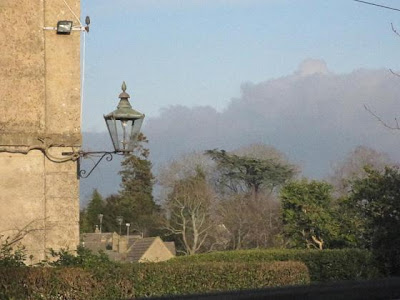 Tetbury had been on our list of places to visit anyway, so it was back into the Moggy and off south-east to Poshville.  Once there, one of the first things we saw, parked outside the ladies, was a four-wheel drive belonging to a window-cleaning business.  It was  emblazoned with the name 'Suty and Sweep', with the addition of a picture of a man in blackface.  Dru and I were affronted and appalled, and made a lot of sweeping generalisations about rich bigots in the countryside.

But the shop was lovely with wooden shelving and a squashy sofa to read on and no Costa Coffee outlet at the back, just more books.  Hereward was indeed very friendly and he took two of my packs, one for Tetbury and one for Nailsworth, and said he would display the postcard prominently, which was very kind of him.  (I reckon it was the commendation from Hugo Williams on the back cover that swung it.)  Unfortunately he didn't feel that there was a market for the books Dru had brought with her, which were all to do with Bristol.  Seems Tetbury isn't that local after all.

We had time to spare so we popped into the church, a 18th century rebuild on the site of an earlier mediaeval church.  It felt very light and airy inside, thanks to the large expanses of window and the incredibly slender steel coloumns clad in painted wood.  It had no darksome mystery, though. (I like darksome mystery.) 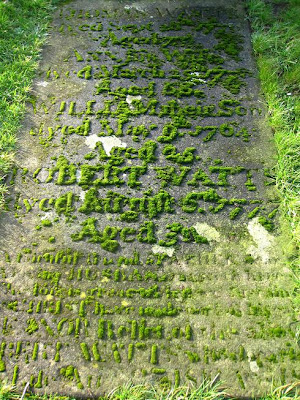 Outside, however, we saw this amazing gravestone, the lettering inlaid with moss as precisely as marquetry.  Can't quite believe it didn't have a helping hand from a member of the congregation.  Very beautiful.

Returning to the car park, we saw the owner of the offensive window-cleaning vehicle clambering back in, looking very cheerful.  He was black.

Back, then, to Wotton and the Cotswold Book Room, which was now open.  Again the woman behind the counter took a pack, although she said it was her sister who decided which books to stock and they didn't sell much poetry.  'Not even U A?' I asked, aware that the late, much lamented U A Fanthorpe had lived in the town.  'Oh, we do stock her,' the woman conceded.  'In fact, we sell a fair bit.'  I should think so too.

Then the drive home via Charfield and Winterbourne.  An altogether more successful day for me than the last time we ventured forth.  I'm really looking forward to when Dru has drawn her map of the three hares churches on and around Dartmoor - what a perfect excuse for more and rather longer jaunts in my favourite landscape,

Posted by Deborah Harvey Poetry at 18:26 No comments: