More on the Map of Dartmoor for my novel, 'Dart'

It's looking fab.  Just about done, I reckon, though Dru might have other ideas.  And my lovely publishers, Ronnie and Dawn at Indigo Dreams, are letting me have it in colour.  I am wearing a grin as wide as a very wide banana tonight ... 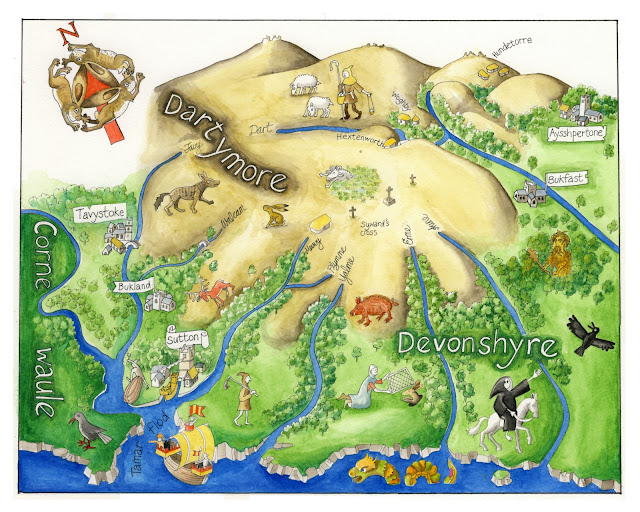 Mapping the Black Death on Dartmoor

Look at this - it's a work in progress for my novel, Dart, which will be published by Indigo Dreams in October.  My wondrously talented friend, Dru Marland, is in the process of drawing a map to illustrate the journey of the hero, Tobias, across the hills to seek help when plague strikes their part of the moor.  And I'm so excited!  I've always loved books with maps in, and never dreamt I'd have one of my own.  By which I mean one I'd written.  (Pinching myself hard ... ) 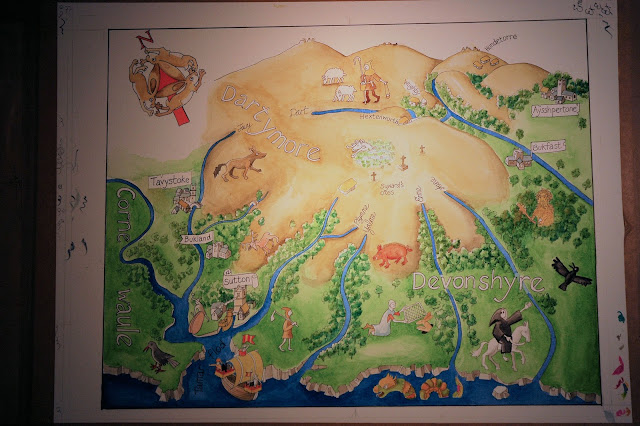 My only sadness is that printing restrictions and cost might well mean that it will have to be greyscale rather than the glorious colours Dru's chosen, but I shall be buying at least a dozen prints of it for myself and friends and relatives, so will be able to enjoy them on my wall, at least.


Posted by Deborah Harvey Poetry at 18:21 No comments: 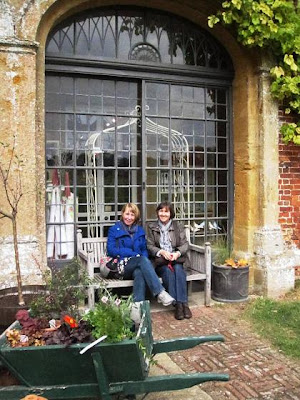 January's so dark it saps the soul. This winter I've surrounded myself with SAD lamps, which do help but even so it's a slog to get through each day.  I think I must be have been a hedgehog in a past life. To make matters worse, apart from a hobble around New Passage and Clevedon, I haven't been anywhere outside of the city in ages, having sprained my ankle just before Christmas.  I was told to bind it up and walk on it as much as possible and left A&E clutching a catering pack of Ibuprofen.  Then it turned out that I had an ulcer and the rest is agony ...

So, I've decided to brighten things up by posting some photos of my 50th birthday trip to lovely Barrington Court in Somerset, back in October, courtesy of my friends, Julie and Alison.  Quirkiness and colour.  Just the job for the dreary time of year. 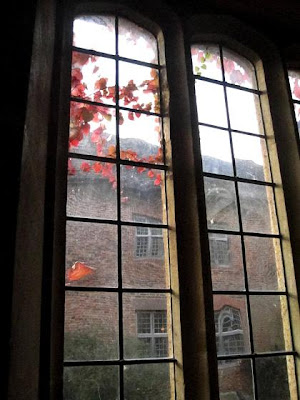 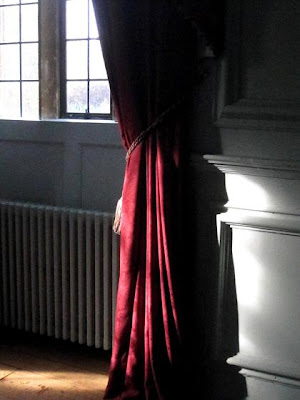 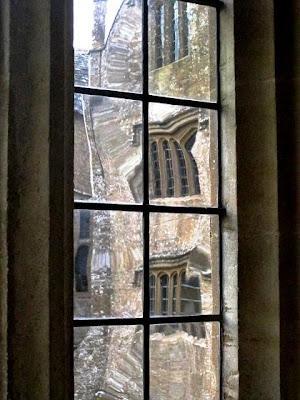 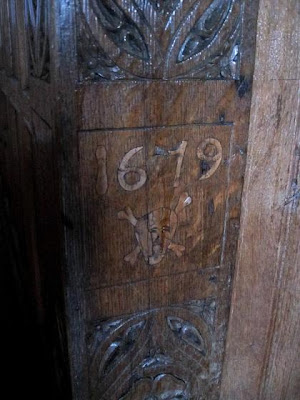 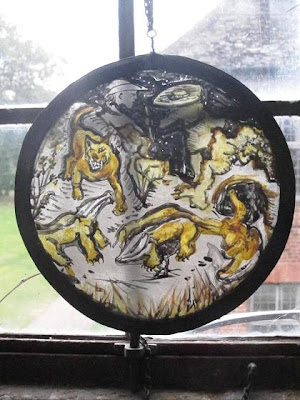 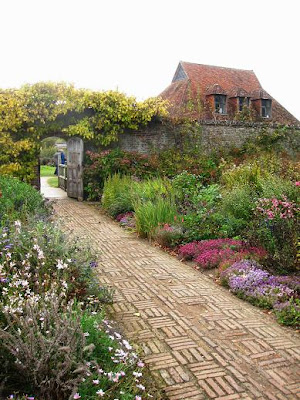 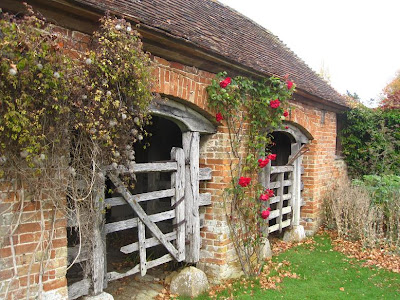 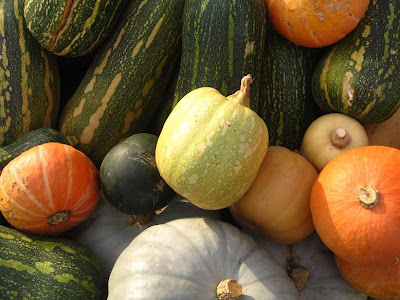 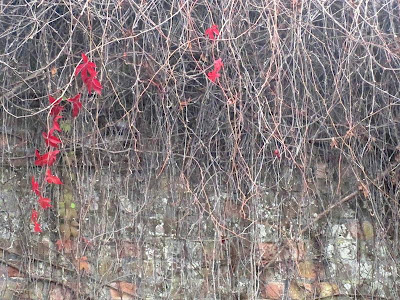 Dru and I had both been very good and chipped away at our respective Mount Kilimanjaroes of admin, so we decided to have a morning out in Clevedon.  Except it wasn’t a morning out really, it was a business trip to sell our various books and Dru’s cards.  First stop, Seeleys in Hill Road, which we visited together last March also.  Dru was looking forward to taking some photos of the 70s interior of the shop because, as she pointed out, it wouldn’t be there forever.  And I wanted to take in the glories of the Fontana Books bookstand with its bulbous 70s lettering again, and see if I could persuade Mr Seeley to take one of my irresistible little packs containing a copy of ‘Communion’, a copy of the review in the Bristol Review of Books, a copy of the ordering information from Central Books and a nice big Vistaprint postcard of the cover of ‘Communion’ with Dru’s three hares on the back, several of which I had in my most poetical shoulderbag.

Generally I shudder when people use the word ‘tragedy’ to describe a goal conceded in extra time or anything short of untimely death, but when we were confronted with this – 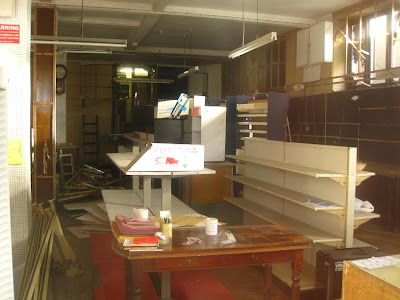 –       it actually felt as if an old friend had died. Or innocence, or the past or something.

So instead of fossicking around inside as we had planned, we took sad photos through the windows, of planks and dust and ancient radiators and pegboards and a two bob bit on a pea green formica counter and a crate with Chutney Indian Mango Empire Produce on it and All Cards 10p and Everything 5p. 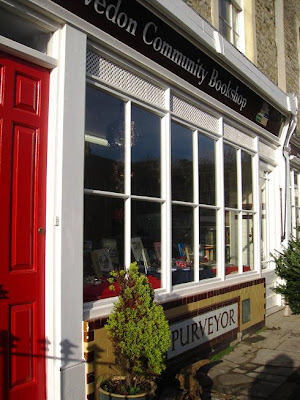 Shouldering our wares, we bade a final farewell to the shop of Dymo machines and a 70s teenager’s writerly dreams and headed off to the Clevedon Community Bookshop in nearby Copse Grove, which rather ironically opened its doors exactly a week after Seeley’s closed.  I had particularly high hopes of getting them to take one of my packs because I am a shareholder(!), having been bought ten quids-worth of shares for Christmas by my friends, Gary and Jill.

When we got there, I was disappointed to see that the old shop tiles on the frontage that I had glimpsed in a newspaper photo and rather narcissistically assumed read HARVEY actually spell PURVEYOR.  It was not a good omen.

Oh, don’t get me wrong, the shop’s fine if a bit haphazardly organised, but it is very newly opened and the volunteers running it were clearly still finding their feet. Dru and I had a judicious whisper in a back room and decided that we would broach the subject of our own wares, and whether we could have a poetry evening there and so on, once it had all settled down a bit. 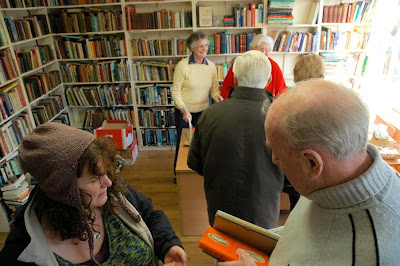 We wandered back to the Morris Traveller, my bag decidedly heavier than it had been, being weighed down by three extra books – ‘Coleridge and Wordsworth in Somerset’ (well, how could I not?), ‘Ghost Stories’ by Walter de la Mare and Collected Poems, also by Walter.  Which kind of wasn’t the idea when we’d left Bristol, but sometimes you just have to go with the flow. 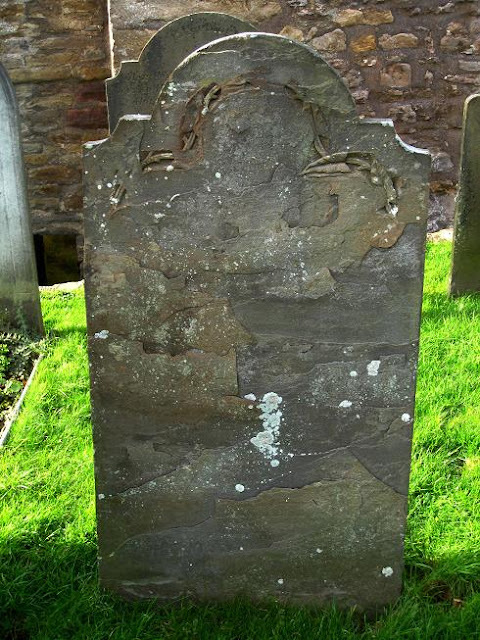 We parked up by St Andrew’s Church only to find it was closed, which was a bit disappointing because the last time I was there, I was so distracted by everything else that I forgot to inspect the memorial to Arthur Henry Hallam, after whose untimely and tragic death Tennyson wrote In Memoriam. But it didn’t really matter because there was a magnificent collection of hefty cherubs on the 18th century gravestones in the churchyard, two of which also bore the adage ‘No one/man is truly happy before death’. Speak for yourself, sez I, because we all know happiness only comes in moments and it was so warm and glorious and almost (whisper it) spring-like that it was hard not to forget troubles and feel a small blaze of joy.

Then we circled the cliff top back to the car, in the hallowed footsteps of Coleridge and Tennyson.  As business trips go, our visit hadn’t been that successful, but not to worry, taking care of the soul is more important. 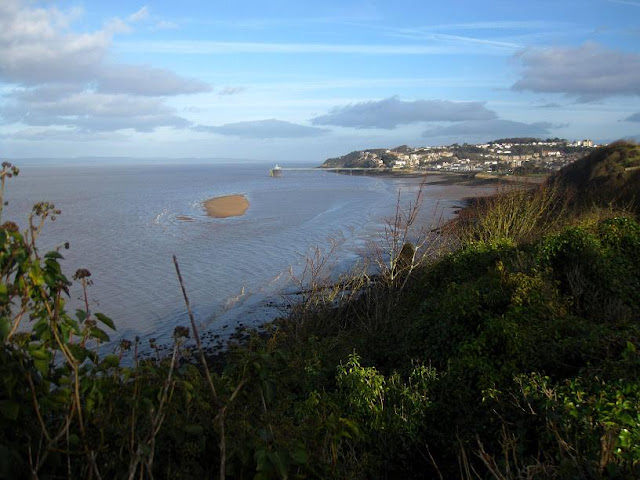