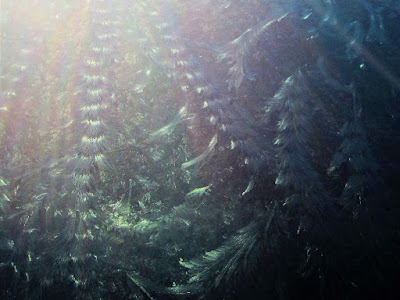 Went outside first thing this morning to find that the frost had scrawled 'The frost performs its secret ministry' in frost lettering all over the windscreen of my car. 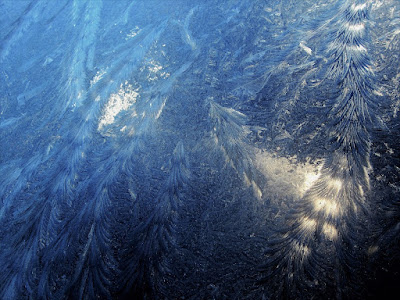 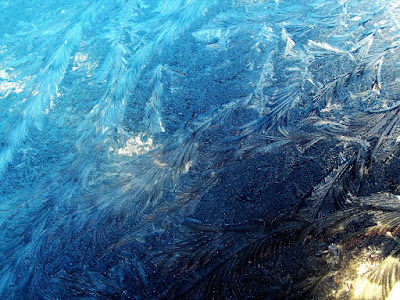 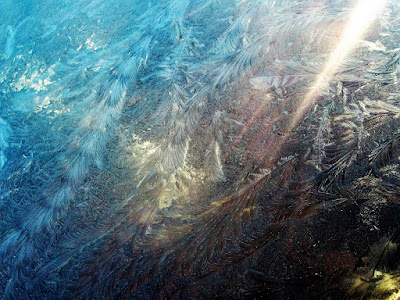 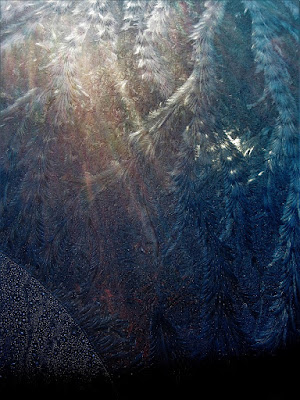 Posted by Deborah Harvey Poetry at 22:07 No comments:

I came home from the tip to find a bumble bee flopped in our front garden. Early emerged from its hibernation, perhaps. In any event, it looked like it could do with some help. 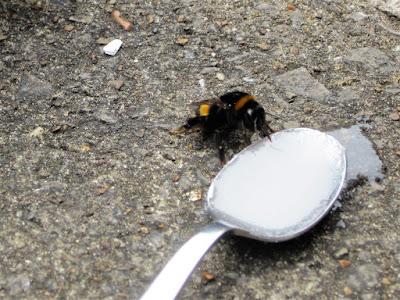 Two parts sugar to one part water is the recipe - any more water and the bee might drown.

Serve promptly on a plate or spoon. (I had to go a bit Uri Geller on my spoon to get it to balance properly.) 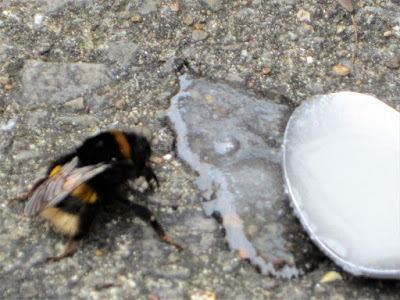 As soon as I put it down, the bee started to waggle its front leg in the air, but was too exhausted to move, so I shifted the spoon towards it instead.  It tucked in for a while, and then withdrew for a bit of a wash and brush up. 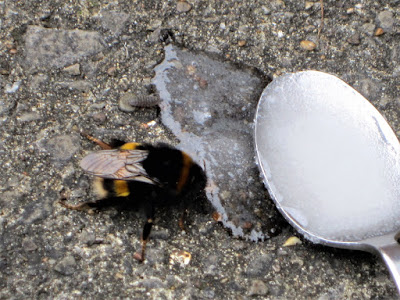 By the time it returned for seconds, a woodlouse had sneaked in ahead, but the bee was clearly a generous soul and didn't seem bothered. 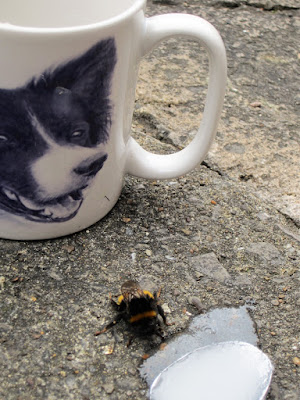 I didn't let them see the mug I'd mixed the sugar solution in, mind. Nor the actual dog, who was safely shut in the back garden. 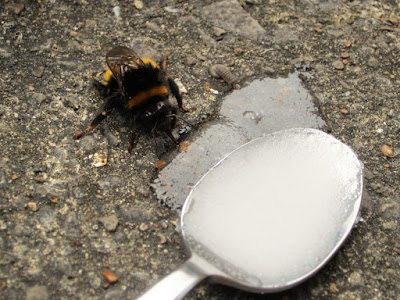 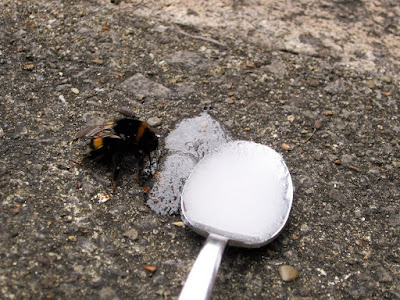 After a while, the woodlouse lumbered off and the bee started to jack itself up like one of those ridiculous American truck things.

I decided to leave it to its own devices for a bit.

Twenty minutes later it was crawling around and looking lively.

Twenty minutes after that it was gone.

I have vague childhood connections with Shepton Mallet. My uncle and aunt lived there for a time when I was very young, and driving past the chamois deer that was the Babycham trademark atop the factory roof was the highlight of long car journeys to and from South Devon before the M5 was built. The deer now stands on a bank sheltering under a tree, as Dru Marland and I discovered a few years ago. 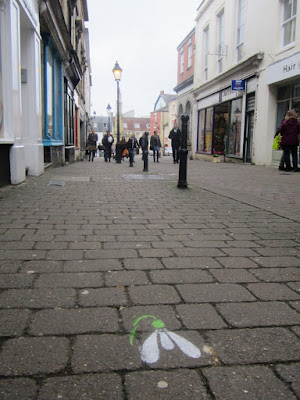 It turns out that Shepton Mallet is also famous for its snowdrops. I didn't know the story of its illustrious son, James Allen, the first person to breed new varieties of snowdrop from ones growing in the wild, during the 19th century. So it's as well there's now a Shepton Mallet Snowdrop Festival to bruit his fame. 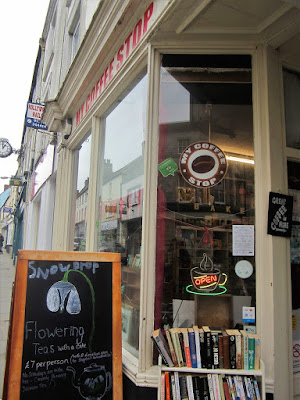 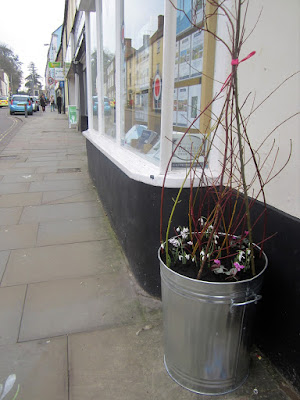 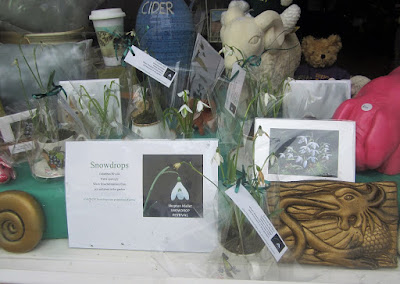 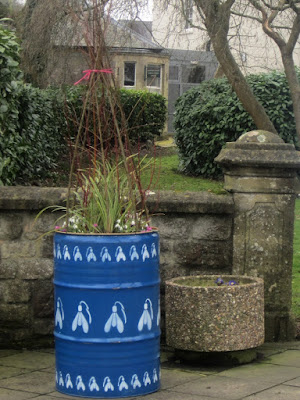 In fact, the whole town's really gone to town on snowdrops. 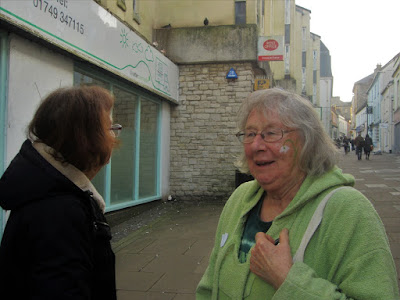 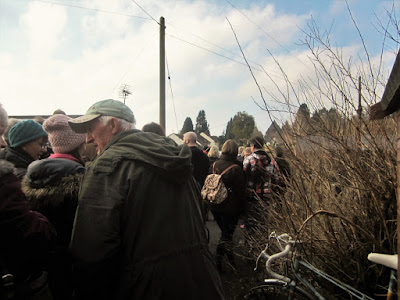 I was there as judge of the first Snowdrop Festival Poetry Competition. First, though, there was a walk, from Highfield House, where James Allen lived, to his family plot in the cemetery on Waterloo Road, for the planting of extra snowdrops. 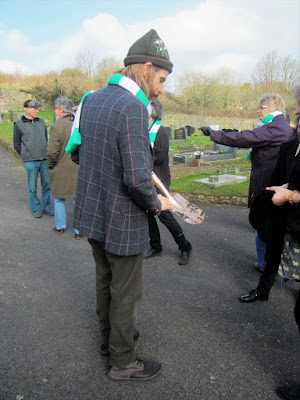 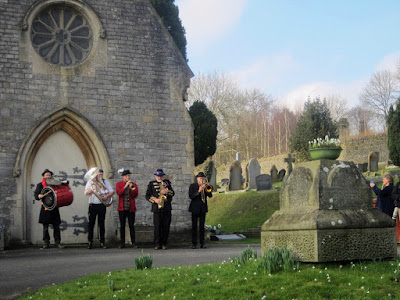 We were accompanied by the Big Noise Street Band from Taunton.

James Allen wasn't the most fortunate of men. Botrytis eventually destroyed his collection and only two of the varieties he bred survive today. I was much luckier ... the competition produced a fine crop of poems, from Somerset and much further afield. A pleasant few evenings in January spent sifting and winnowing entries culminated in a highly enjoyable set of readings by the shortlisted poets and presentations to the prize winners, washed down with mulled cider.

Best of all, I got the chance to look at the unassuming snowdrop afresh, through the lens of all the poems entered, and it was a delight. 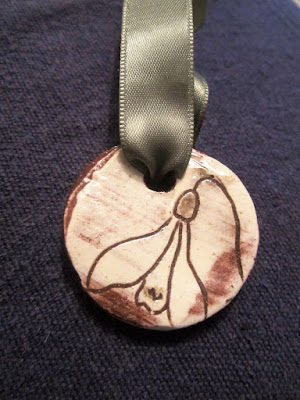 Posted by Deborah Harvey Poetry at 22:52 No comments: