Inspiration : The Poet And The Boatman

I was recently approached by Neil Howell, who keeps a blog called Teignmouth in Verse. He'd come across my poem The Poet And The Boatman, about John Keats' stay in South Devon during 1818.  I gave permission for him to post it, found myself explaining to ex-pat actor and Romantics aficionado Ian Frost how I came to write it, and decided the story might make another post in my Inspiration series.

My immediate family's connection with Teignmouth and Shaldon on the South Devon coast goes back many years.  My parents first 'discovered' Shaldon the year before I was born. My father said he walked onto the beach and had the sensation he had 'come home' - quite odd, really, since he is not at all given to airy-fairiness, as he would doubtless regard it.  They returned year after year with my elder sister and me. 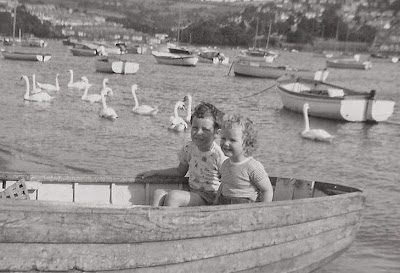 At first we stayed in Chez Nous B&B on The Strand with Mr and Mrs Cordon and their Jack Russell terrier, Jo-Jo.  (The house is now a bastion of UKIP, alas.)  And sometimes we stayed in the shabby grandeur of Manor House, two doors up, or the flat above the Clipper cafe or, more often, one of the caravans or chalets at the site by the bridge which now has mock-Georgian cottages built on it. When I was about 11 my parents bought a caravan at Smugglers Caravan Park in Holcombe and there we have holidayed ever since. (Obviously not still with my mum and dad - I grew up and had kids of my own, and now it's mainly just me and my partner and my border collie, Ted.)

When I was about seven, I remember my father pointing out a yellowy house across the estuary in Teignmouth,  'That's Keats' House,' he said. 'Who's Keats?' I asked. 'A poet who stayed here,' my father answered cryptically. 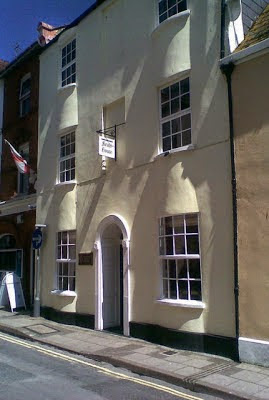 Any mention of poets, authors or artists filled me with great excitement as a child and I would walk very slowly past the house whenever I saw it, in case I glimpsed a shadow or a ghost in a billowing white shirt.  Although once back in Bristol, I would have trouble remembering who exactly had lived there - was it Keats or Yeats? Both, I knew, were poets, but apart from being dead, I knew nothing about them and had no idea what distinguished one from the other.  Eventually the idea of John Keats coalesced in my mind and when, as a teenager, I first read 'La Belle Dame Sans Merci', it was with the sense that we somehow had a connection.

Anyhow, about 20 years ago, my aunt who is married to one of my mother's many brothers but is actually a blood relative of my father (we'm a bit like that in Bristol, mind) received some documents from a cousin of hers who is into genealogy, and she forwarded to my father the information pertaining to the Harveys. In it we discovered that my great-great-great grandfather, James Harvey, a Somerset man from Weston-Super-Mare, worked as a boatman all around the peninsula in the 1820s and 1830s, marrying a woman from St Marychurch on the way and settling for a couple of years in Teignmouth, where two of their children were born.  It was, indeed, 'home'. I was wildly pleased by this, partly because of my love for Devon in general and the River Teign from source to sea in particular, but also because of the Keats connection.  I harboured a brief fantasy that James Harvey might have rowed John across the river to Shaldon or maybe my great-great-great grandmother laundered his shirts or served him a beer in a pub or even just greeted him in the street one morning.  Of course I soon discovered that this could never have happened as they didn't coincide in time, Keats having left Teignmouth in 1818, perhaps when it was clear that the sea air was not benefitting his brother, Tom, who was to die of tuberculosis just a few months later.

I had it in mind to write a poem about this missed meeting - between Keats, James Harvey the boatman, and me - for some years.  When I finally found my way in, I decided not to be explicit about who the boatman was, mainly because his exact identity is really only of interest to me. In fact, people tend to think he might be Charon, which never occurred to me when I wrote it, fixed as I was on my ancestor.

As for the poet, I didn't want it to be immediately obvious who he was either, although most people with an interest in poetry would realise within the first two lines.  Teignmouth has the reputation of being a rather stolid town - certainly Keats' skinny-dipping met with considerable disapproval - and it doesn't have a huge number of literary associations.  And even if you haven't rumbled who he is by then, well, the foreshadowing in the references to blood and drowning soon make it clear.


The Poet And The Boatman

Tidal here and salt
the final turn of Teign
before its fretful merging with the sea
creates a harbour in the lee of land,
this curved blood-coloured beach.

Through mist that lifts like linen wraiths
I glimpse the poet stripping off
his white ballooning shirt and britches,
bathing in a manner
far from gentlemanly

while over here a boatman’s sanding smooth
a newly mended hull.
He’ll check the caulk is watertight
before he ventures out to rescue souls
condemned to watery death.

Both men are bright-faced,
close in age,
yet they’ll never share a jar
for by the time the boatman’s posted here,
John Keats is twelve years dead.

Instead the boatman heads for breakfast,
and John is gone with a flap of his red-stained shirt
to flirt with the sleep-soft girls
stirring in their beds
above the bonnet shop.

'The Poet And The Boatman' is published in my 2014 collection, Map Reading for Beginners, published by Indigo Dreams and available from their website. (Or from Amazon if you must, or all good independent bookshops.)

Posted by Deborah Harvey Poetry at 21:04