One of the reasons why I keep this blog is as a Commonplace Book.  Writing posts about my jaunts with photos helps me to remember in detail where I've been, and if I'm lucky enough to come home with a potential poem in my pocket, it's an invaluable tool for the writing of it, especially since a fair bit of time can elapse before the poem is ready to be shaped.

One of my favourite beaches is Berrow, on the Somerset coast.  Park near the church at the west end of the village, cross the churchyard, wind your way through the dunes and you'll soon reach the fantastic beach.  A large part of its appeal for me is that it's dog-friendly all year round.  It's also less frequented than the neighbouring beaches of Burnham, Brean and Weston-super-Mare, and it even has a shipwreck.  Of course, this being the Bristol Channel, it also has the world's third highest tidal rise and fall, so you can miss seeing the sea altogether, but the light reflecting off the mud has its own beauty.

I last visited Berrow on Boxing Day 2013.  It was the brightest of days, made more so by the knowledge that the dark would start seeping up from the ground as early as 2pm and by 4pm the light would be all but gone.  I came home with a series of photographs that were  - to my eye, at least - quite startling in their brilliance. 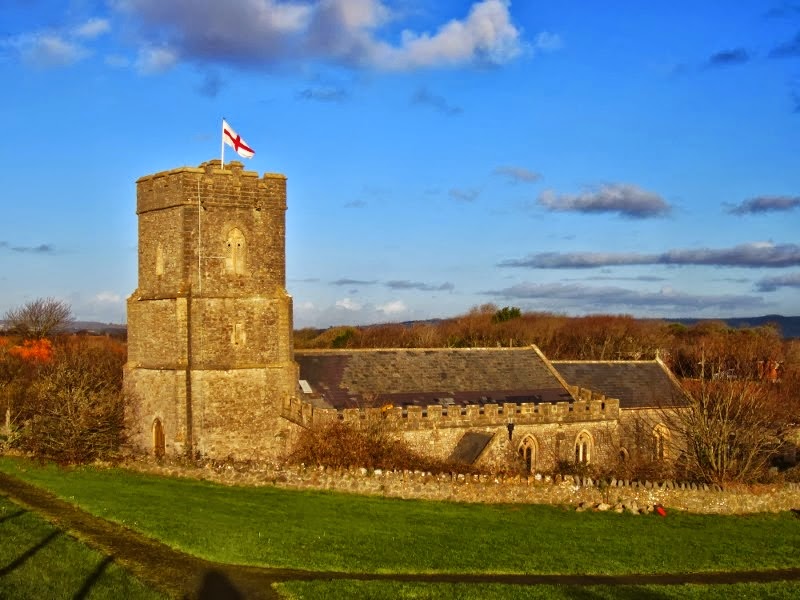 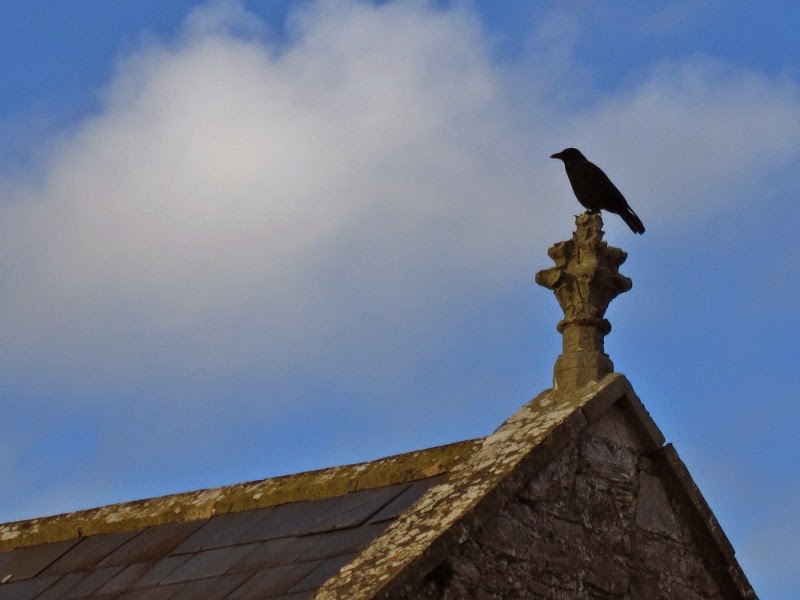 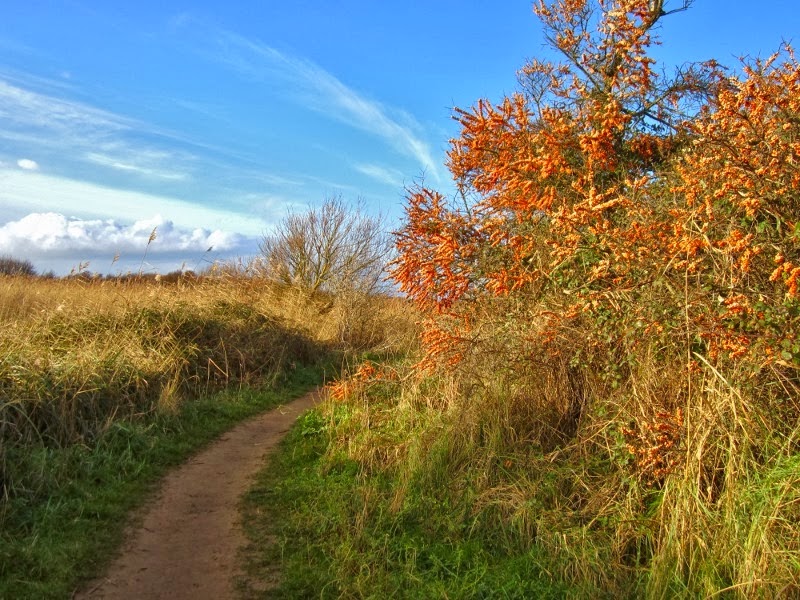 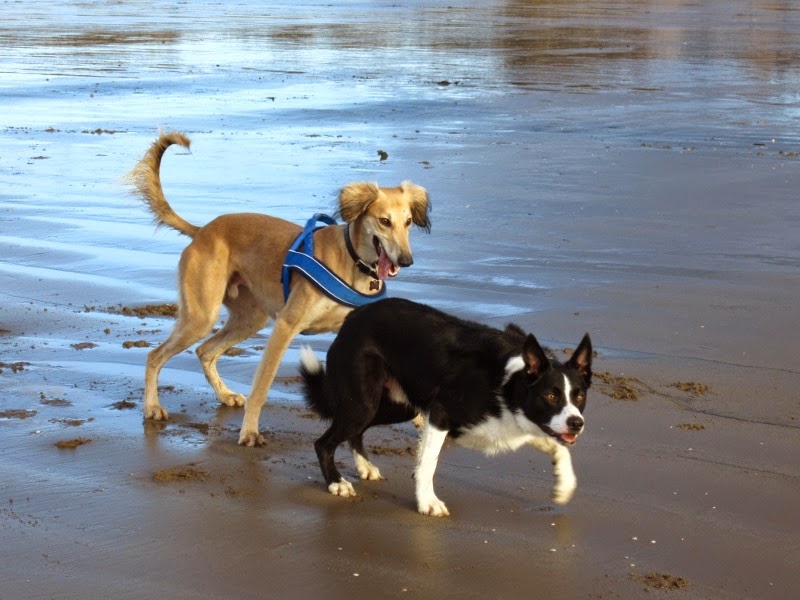 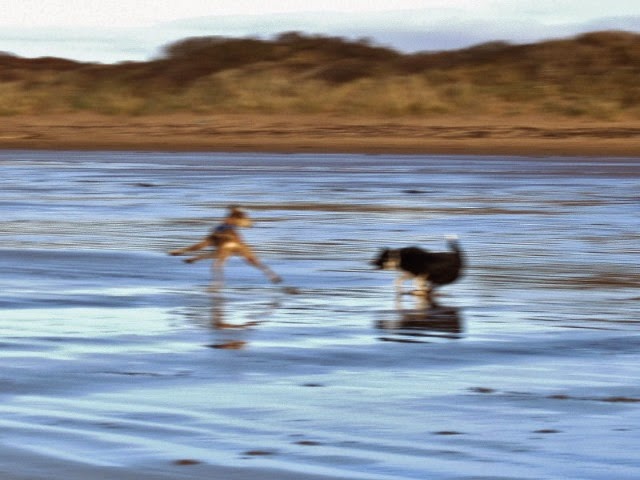 Back at home, the following photo interested me the most.  It was taken through an ancient plain glass window in the church, and it was like seeing all the colours and shapes of nature outside refracted through water.  It made me want to write a poem that refracted the landscape I'd seen, within the parameters of the (almost) shortest day. 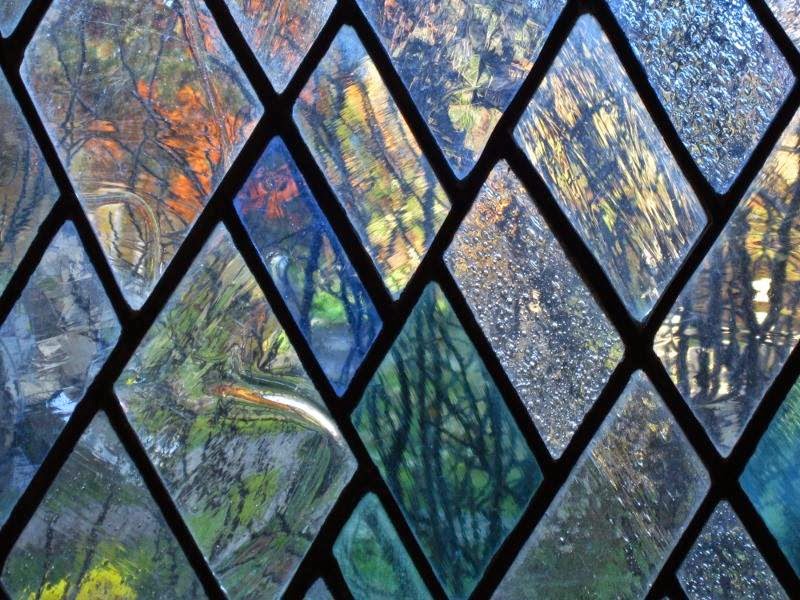 So I started to think about how I could achieve this, and it was immediately clear that I had to adopt a different approach from usual.  The majority of my poems are about more than their ostensible subject, but this one needed to be simple - a straightforward record rather than a piece of writing filtered through something else.  This meant form would be important, as it would compensate for possible lack of depth.

Because it is out of routine, the time between Christmas and New Year feels somehow out of time to me, and I wanted to reflect this in my poem.  I also wanted my poem to mirror the length of days by being short, and by beginning with daybreak and ending with night.  A circular poem, then, and that needs a circular shape. I started to think about poems that begin and end with the same image, and remembered Ted Hughes' 'Amulet'.  This beautiful piece of writing makes use of 'anaphora' - a type of parallel structure generated by the repetition of certain words or groups of words at the beginning of each line.  This is an ancient technique which is used in both religious and folk poetry and which creates the effect of a litany.

By now, the word 'between' was becoming an obsession. Mentally, I went back to the landscape - between land and sea, between sky and mud - and the notion of 'time between' - between one great feast and another, between sunrise and sunset.  The whole experience became suspended in my mind like a brilliant bauble. It could have happened thirty years earlier, not just a few days - in fact, I wasn't sure I could remember a time before it was part of my experience.  Which meant I needed to write something that could have been written at any time, that was timeless - something that could even be part of our folk tradition. 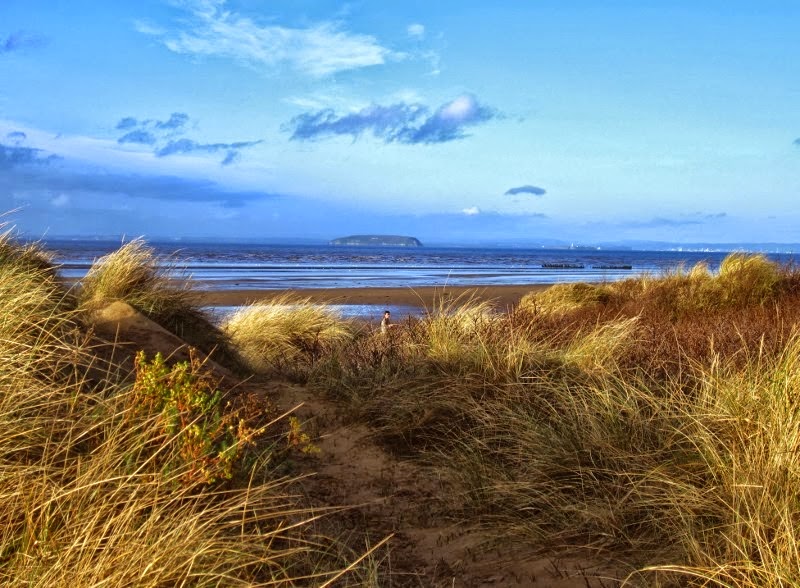 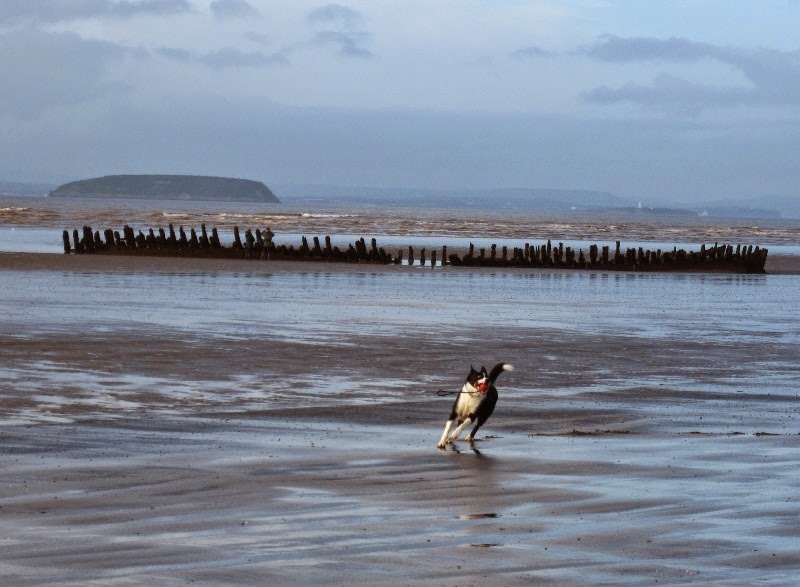 the wreck of SS Nornen 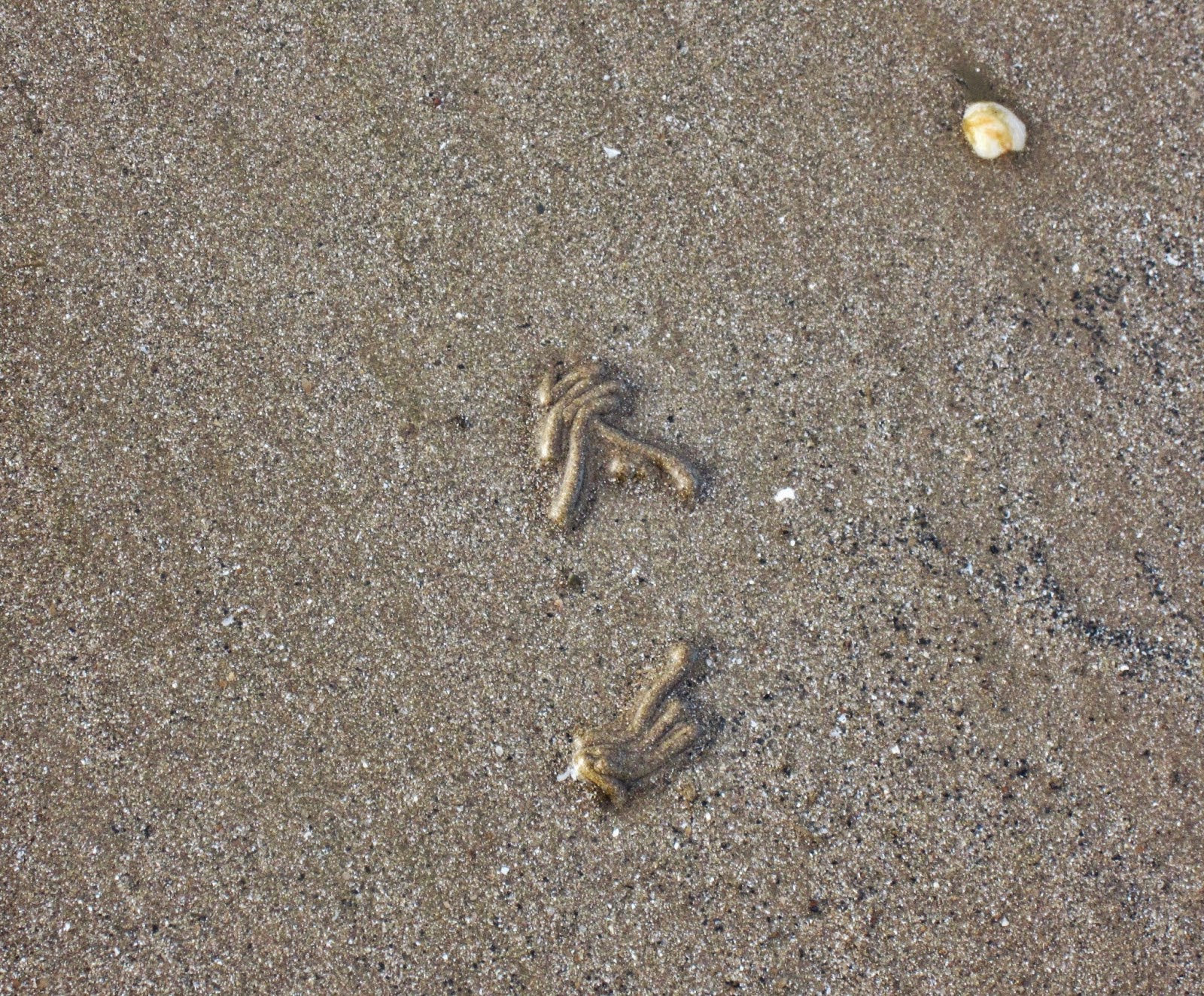 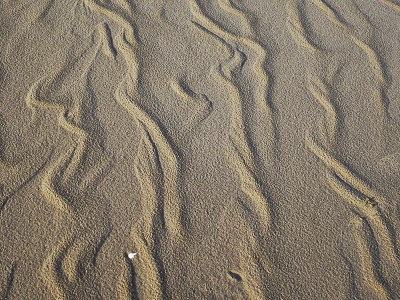 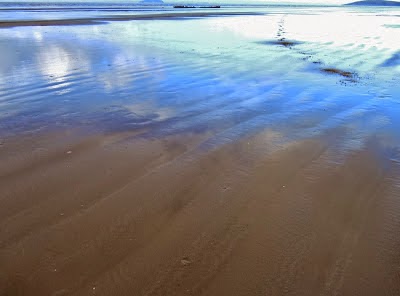 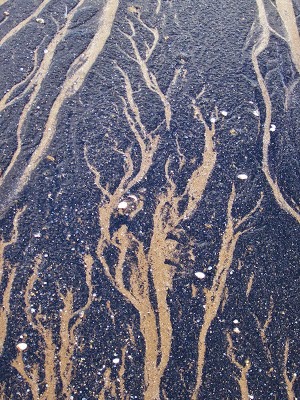 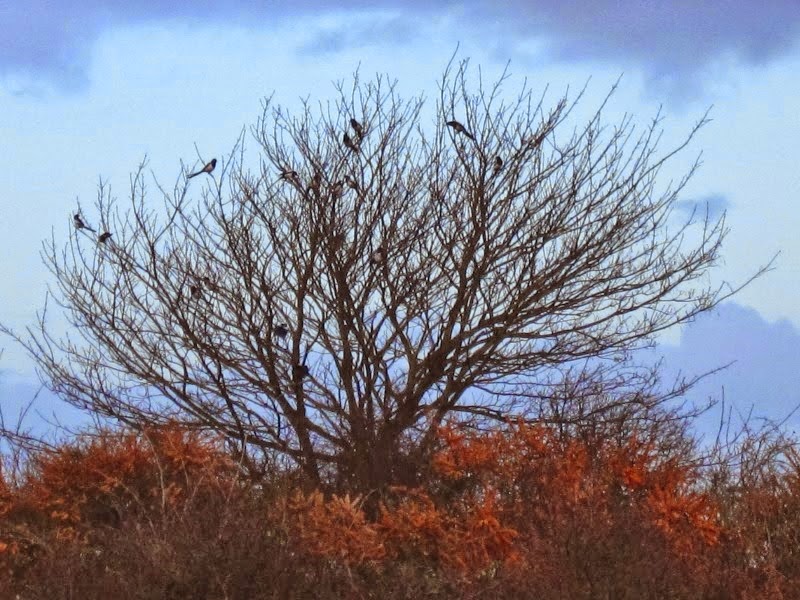 a treeful of magpies
Then, the hard work. It's a truism that the most artless poems are the ones most effort has gone into to make them appear that way.  My main problem was that I had one or two beautiful images I badly wanted to use that were too complex to fit the rhythm of my poem - because when you're relying on form and repetition to create an effect, you can't then cram in something that doesn't fit.  So they were duly put to the sword (or rather, set aside for possible use in the future).

I walked the poem for the best part of a month.  I was sure it fitted together. I left it for a month.  I found it didn't fit as well as I thought it did. I tweaked a little more.  Finally it was done.

The last thing I had to do was find a title. In the end, I settled on 'Winterset' - a pun on the location of the poem, which harks back to mediaeval tradition and suits the feeling of timelessness I'd tried to engender.

Between dark and dawn, the sleep-smudged sun
Between sun and moon, the scavenger flood
Between flood and flux, the blackening wreck
Between wreck and sky, the covetous mud
Between mud and sand, the glyph of worms
Between worm and beak, the runes of gulls
Between gull and pebble, the butterfly shell
Between shell and ripple, the ebb-tide flower
Between flower and scrub, the crouching dune
Between dune and reeds, the glancing marsh
Between marsh and tower, the magpie's eye
Between eye and blink, the plummeting dark

There - all over in a blink!

'Winterset' is published in my 2014 collection, Map Reading for Beginners, published by Indigo Dreams and available from their website. (Or from Amazon if you must, but remember that they sell this sort of stuff as well as books.)

Posted by Deborah Harvey Poetry at 13:56