So Much More Than The View ... National Association For Areas of Outstanding Natural Beauty/National Parks 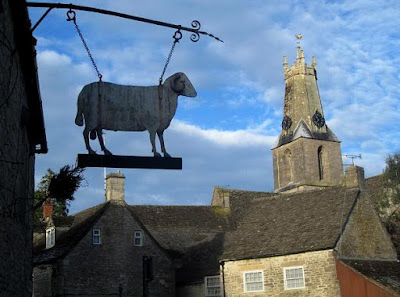 I love leaving the house (and the vague notion that I should be doing some housework) to go walking, preferably in the country. For me it's an intrinsic part of the writing process, and I am hugely lucky that my home city of Bristol is ringed by the Wye Valley/Forest of Dean, the Cotswolds, and the Mendips, and that at a slightly greater radius lie the Gower, the Brecon Beacons, the Malverns, the North Wessex Downs, Cranborne Chase and the West Wiltshire Downs, and the Quantocks. 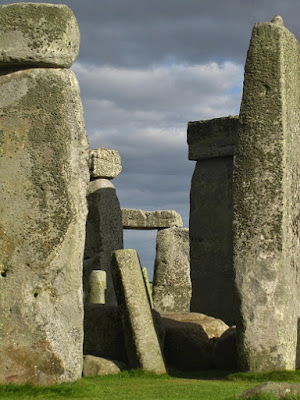 And when I holiday, invariably in Devon, I can see Dartmoor from the hills behind my family's caravan, while the Blackdowns, North, East and South Devon, Dorset, the Tamar Valley, Cornwall, and Exmoor are all within easy reach.  So much variety and interest - and all of them either Areas of Outstanding Natural Beauty or National Parks. 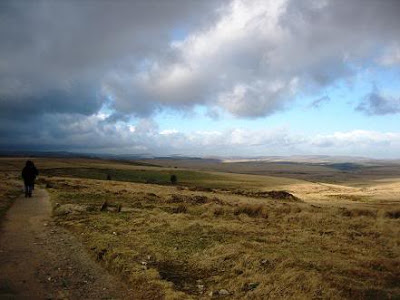 So I was delighted when our postman turned up with several copies of So much more than the view, a joint publication from the National Association For Areas Of Outstanding Natural Beauty and National Parks England, which highlights the benefits such areas offer society. 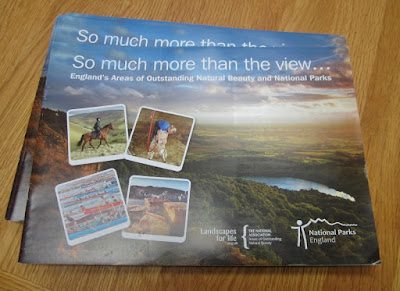 It turns out that the AONBs and National Parks in England cover more than a quarter of the country and welcome more than 260 million visitors per year.  They also provide inspiration for artists and writers (like me) and sporting people (not like me); homes for people and wildlife; thousands of jobs; and life-enhancing experiences for people of all ages.

Given that these areas are so vital to the country's economy and to the health and well-being of so many, it does therefore seem surprising that public spending on AONBS and National Parks is less than £1 per person per year.  They need more investment from the government to continue to protect these places and to promote sustainable growth within communities. I support these aims, which is why I was delighted that my poem, Coleridge Changes His Library Books, from my first collection, Communion, was quoted in part in the brochure, as an example of how these places can be inspirational.

In fact, my poem about Coleridge, who famously walked his way around the West Country,  takes its inspiration from visits I made to the Quantocks, Exmoor, the Wye Valley, the Mendips and East Devon - no less than four AONBS and one National Park.

At the launch of the brochure back in June, the Environment Minister Rory Stewart asserted that we have a 'deep obligation to protect this land, its farms and its communities', and that 'while we celebrate the fact that they have also to potential to bring prosperity, we must never reduce such places simply to their economic value – they are so much more than that.'  Whether this will translate into more government investment remains to be seen.  Certainly such statements seem to be at odds with permitting fracking companies to drill horizontally under national parks and other protected areas, to give just one example of the way these landscapes are under threat.

In the meantime, we can voice our opposition to such initiatives, visit our special places and support their local businesses, support the AONBS and National Parks by donating, volunteering, putting our car parking money in the honesty box, etc. And we can keep on walking, learning and writing; painting, photographing and sculpting; telling the stories and histories of these places; and letting everyone know how vital - yet fragile - they are. 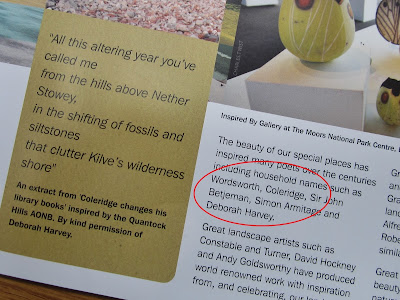 As for the bit about being a household name, well, thanks, guys, but I don't think
that's the case even in this house, given that the dog seems to think I'm called Mum.  But I'll still keep visiting and keep writing.

Posted by Deborah Harvey Poetry at 15:32