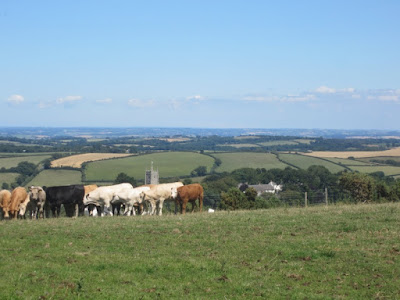 One last holiday jaunt before returning to Bristol. Having cleaned up and loaded the car, we set off for Drewsteignton and a favourite pub of mine, The Drewe Arms, where we stopped for lunch.
I'd decided the time had come to take my partner in poetry on what is perhaps the greatest of all Dartmoor Newbie walks, the wander from the inn at Fingle Bridge along the banks of the River Teign via Fisherman's Path to the road leading to Castle Drogo, then back along Hunter's Path to our starting point.  Except that we were going to set out from Drewsteignton itself and vary the route a little further by doing it in reverse.  This involved traversing a field of cows (again) which didn't make me Ms Popular (even though I was at pains to point out that it wasn't anywhere near a different field in Drewsteignton  in which I'd encountered a very testy bull back in 2003). 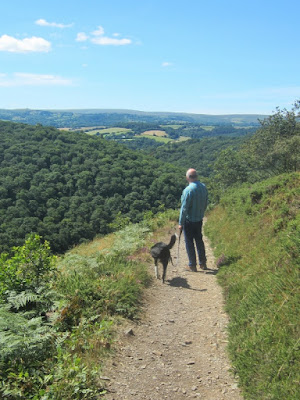 Having reached Hunter's Path we turned right, away from Fingle Bridge. This was partly to get most of the walk done before any further drinking opportunities arose, and partly so that the first view of Castle Drogo my partner would get would be the one from Sharp Tor, where it rises from the granite as if it had miraculously grown of its own accord, rather than been built.  By Lutyens.

Meanwhile, Ted was staking his claim on all he surveyed. 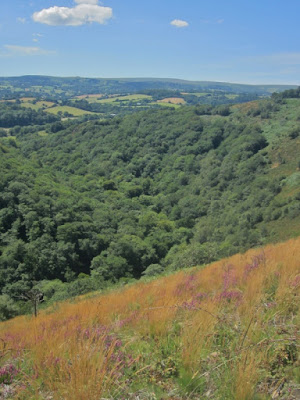 As we advanced along the path, there were lots of other fabulous views, like this one over the Teign gorge, with Kes Tor a wart on the horizon.  (You won't be able to make it out in this size picture.) 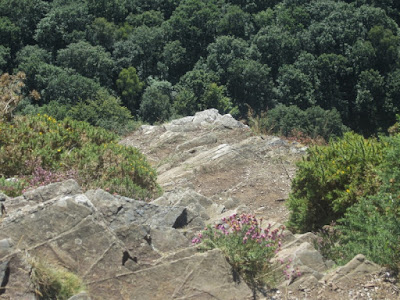 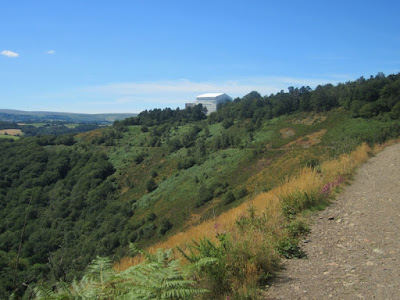 ... ready to drink in the glory of Castle Drogo, and instead saw the biggest tent in the world. Buggrit. Restoration set to continue for a few more years yet. 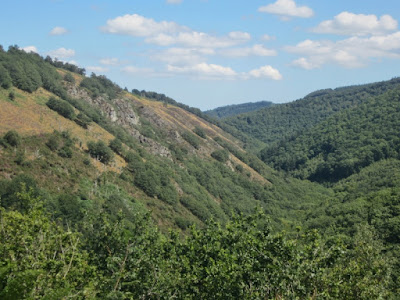 Looking back up the gorge to Sharp Tor 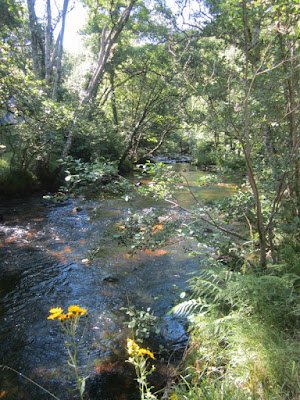 It was a warm day so we were glad to come down off Hunter's Path, which is pretty exposed, and return along Fisherman's Path - not an easy walk, due to the roughness of sections of the track and the need to climb a lot of steps to circumvent the foot of Sharp Tor where it meets the river - but pleasant all the same. 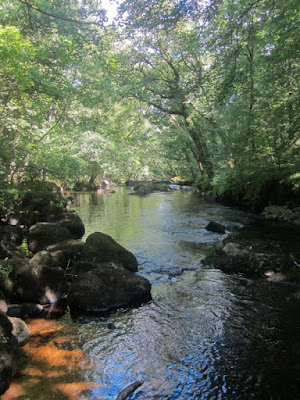 Teign by turns fretful and placid 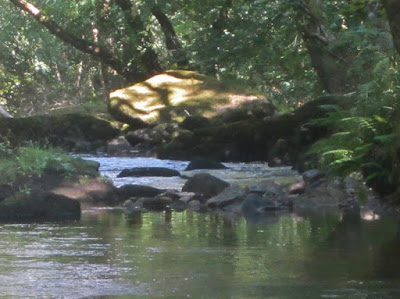 As elsewhere on the moor, the stone in the gorge is granite, but here the effect of sun on moss turned it to gold. 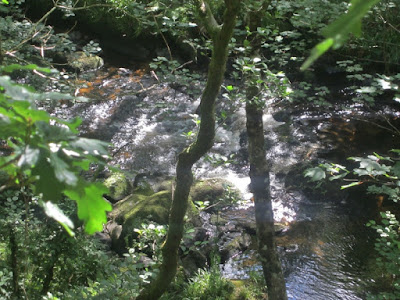 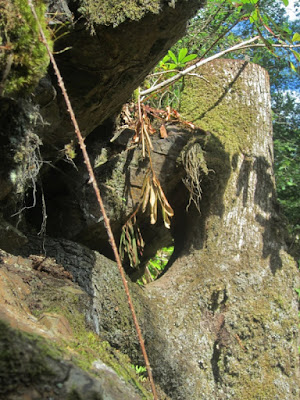 Hard to tell here which part is stone and which is wood. 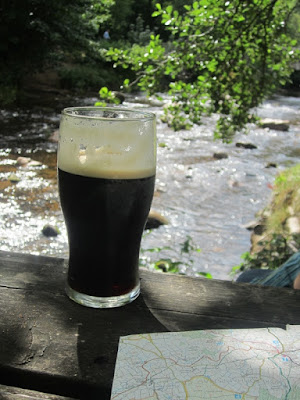 What was once The Angler's Rest is now the Fingle Bridge Inn. We stopped for a breather and took in the scene - more people than almost anywhere else on Dartmoor, I suspect, but still quite peaceful. 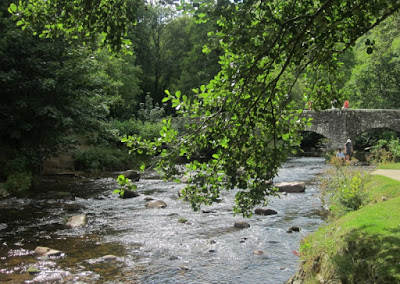 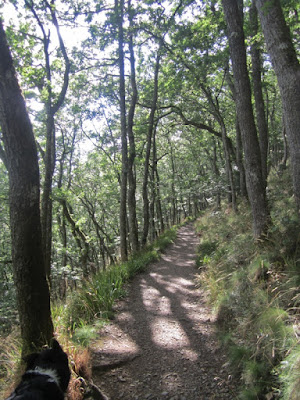 At this point, having left the bridge, I remembered something about this walk that I forget in between each attempt at walking it, and that is what a bastard climb it is up through Drewston Wood to regain Hunter's Path.  The photos don't do the gradient justice.

It was a question of picking a tree up ahead and marching straight at it, followed by a prolonged lean against its trunk while hips, knees, ankles and lungs recovered. 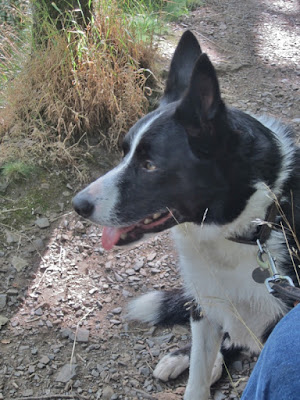 Ted didn't appear to be struggling, however. 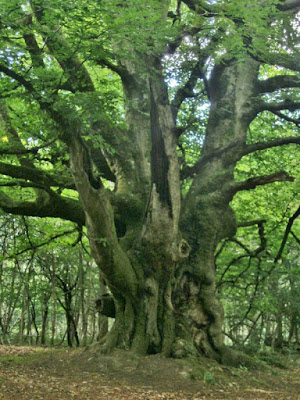 Once on the higher path, we recovered in the cool of the trees.  I was ultra impressed by the venerability  of this beech tree.  They seldom seem to live long enough to swap magnificence for character, but this one has both. 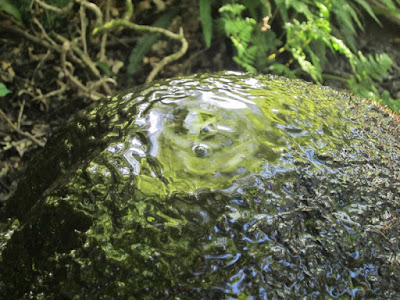 We then wound our way through to Rectory Wood, where there's a sculpture by Peter Randall-Page from his Granite Song series.  I paid homage at all the sculptures on the trail about fifteen or so years ago, and this one is probably the least prepossessing, but I love the way it interacts with nature, being set over a stream and engineered in such a way that the water bubbles out through a hole in the top of the boulder. 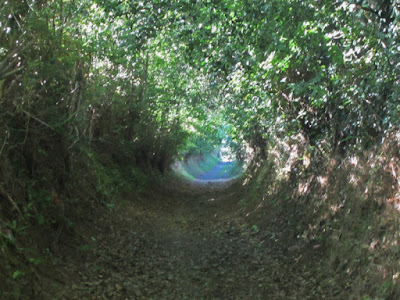 I suspect it might be time to start revisiting the rest.

By the time we'd hobbled back up the holloway to the village, I was in a lot of pain, having packed my Co-codamol in the bottom of the boot without first taking any, but the day was not yet done for when we arrived back in the village car park, it was to discover that my front tyre, driver's side, was completely flat. Whereupon we adjourned to the pub and the landlord's lovely partner took pity on me and changed the tyre in exchange for a rather sweaty hug. Told you it was a great pub.

Posted by Deborah Harvey Poetry at 07:27