Last week came the partial unravelling of a mystery that has foxed me ever since May 2011, when Dru and I visited St Michael's, Dundry, which, as its dedication suggests, perches high on Dundry Hill overlooking Bristol. 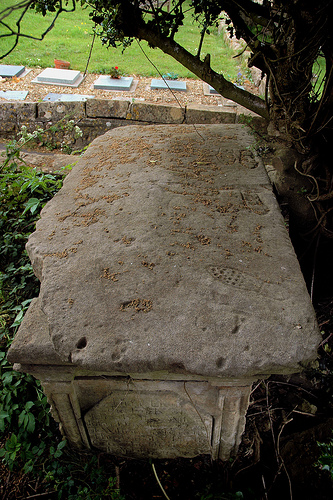 This is Dru's photo of an altar tomb dating from the 1730s in the churchyard. If you look to the right hand side you can see that there are outlines of shoes - or rather, soles - on the slab.  But why, dammit, why?

We pondered long and hard. Perhaps a lover had cut them while he was waiting for his sweetheart to emerge from evensong.  Except he'd have opted for a heart and initials, wouldn't he?

Maybe it's a dancing lesson, Dru said. It's interrupted when father comes home from the quarry - there's his hobmail boot on the threshold, see?

No, it's the footprints of a mother and her children dancing on Father's grave, I concluded.  And I wrote a rather poor poem and Dru drew a picture for a putative illustrated book of local poems that never got any further than that. 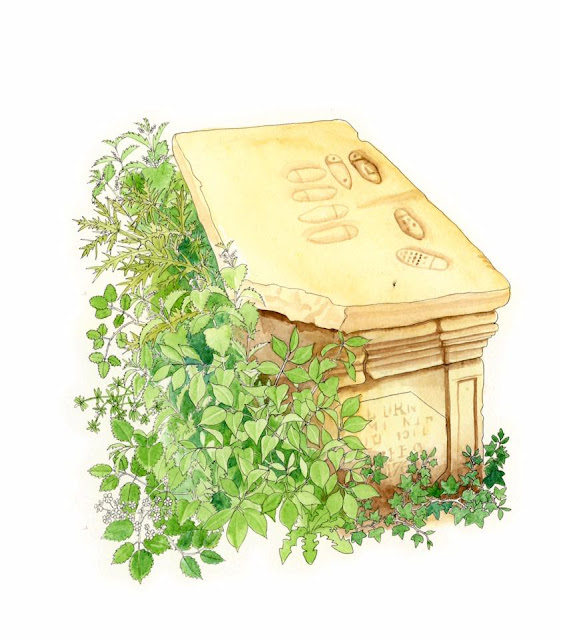 I did make sporadic, rather lethargic attempts to find out a little more. 'Was it a cement top to the tomb?' asked David Williams, a then inhabitant of the village. 'Could they be prints rather than carvings?' But no, it was definitely the local yellow oolitic limestone that goes by the name of Dundry stone.

And that was that until some desultory browsing on Facebook last week uncovered this photo taken in the porch of St Gile's Church, Bredon in Worcestershire in a group called Apotropaios. 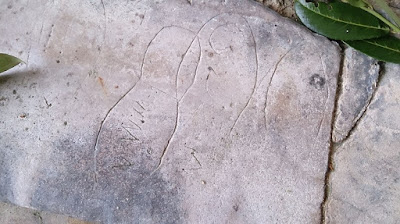 Well, I knew about the practice of concealing (mainly well-worn) shoes in buildings since at least the early modern period, as magic charms to ward off evil and/or fertility charms, but I hadn't associated this with carved outlines or even realised that the examples at Dundry were anything more than an isolated phenomenon.

There was more. A friend of Dru's, Philip Watson, posted these from the roof of St Peter and St Paul at Mucheleney, with the hasty postscript that he hadn't been up there for nefarious purposes. 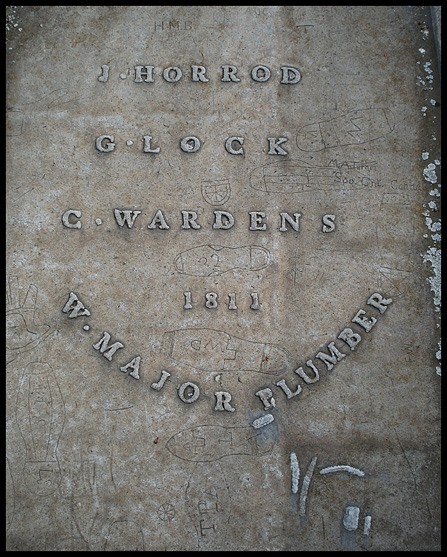 I tried a spot more googling.  June Swan, former keeper of the shoe and boot collection at Northampton Museum, writes 'Shoe and sole outlines may be found scratched on buildings and other structures, which confirms the significance of the shoe shape' but offers no further information or explanation.

I found further examples in the form of an outline of  what looks like a matching pair of shoes carved into the lead on the roof of St Michael and All Angels in Edmondthorpe in Leicestershire.  Also in the graveyard at St Stephen's Chapel, which forms part of the ruins of Bordesley Abbey, Redditch, where the Curator believes them to be either acts of vandalism or an indication of profession, such as cobbler. Meanwhile the blogger who posted the photos suggests that they might be connected with the custom of giving clothes shoes to the poor by the monks - although this wouldn't account for other examples elsewhere, and in a non-monasterial setting.

All of which poses more questions than it answers - for example, are they always associated with religious buildings? - and leaves me more intrigued than ever by these vestiges of lost souls.

Dru Marland has drawn another example to my attention, at St Melangell's Church in Welshpool. Again, locals seem to be blaming cobblers! 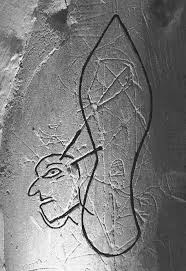 A shoe at St Mary's in Trostan, Suffolk, together with the head of a demon. 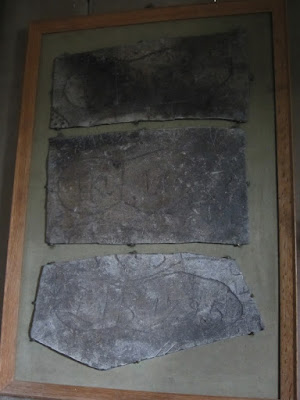 Spotted these at the back of the redundant Church of St James of Compostela in Cameley. The guide to the Church merely describes these as 'three pieces of lead from the roof, where presumably those who laid or repaired it autographed it with their footprints and the dates 1733, 1757 and 1795.'

Posted by Deborah Harvey Poetry at 11:52