After Friday’s trip to the southernmost peak on Dartmoor, I felt inclined to visit the northernmost, Cosdon Hill, for a long time believed to be the highest point on Dartmoor until accurate methods of measuring revealed Yes Tor and High Willhayes to be higher.  I had a second reason also: the feasting accompanying Son the Younger’s 17th birthday the previous day meant that I had some atonement to do.  A serious climb would make me feel less gluttonous.

Ted and I started out at South Zeal, right on the edge of the moor.  After passing the brick chimney and spoil heaps of the disused copper mine on Ramsley Hill, we climbed steeply onto open ground and began to make our way around the side of Cosdon. 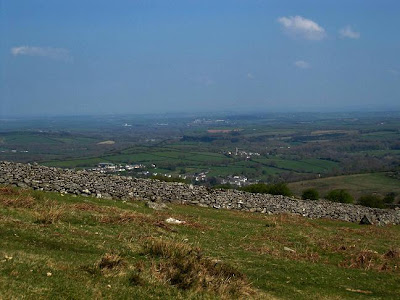 This is a walk characterised by Bronze Age remains and the first set we encountered was The Graveyard – not my usual sort, attached to a church, but three parallel rows of stones processing up to three larger ones at the head, beyond which lies the tumbled slabs of a double kist or ancient burial chamber. 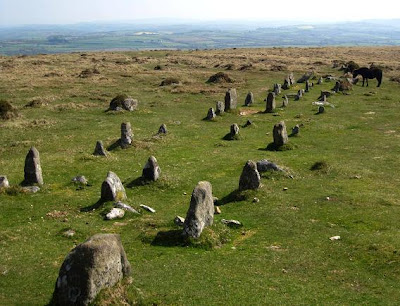 It was such a beautiful day, and we were so gloriously alone, that Ted and I sat quietly for a time and listened, first to trickling larksong and then, when it stopped, the breeze and the mewing of a pair of buzzards rafting the up-draught.  For any Plathians who stumble across this account, the views we were enthralled by are almost certainly those described by Sylvia in ‘Ariel’ and ‘Sheep in Fog’. And who knows, maybe this is one of Ariel's descendants, having a good scratch. 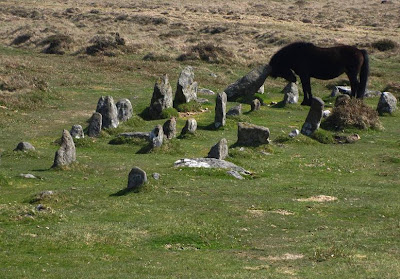 The next stage of our walk involved the skirting of Raybarrow Pool, one of the largest and most treacherous mires on the moor, via the deep-cut mediaeval peat path. 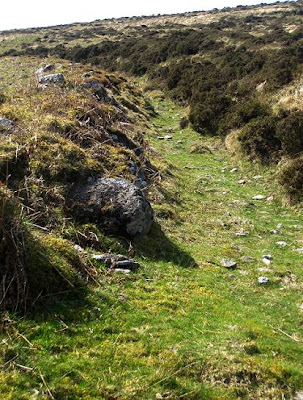 After a while it tends to ‘peater’ out into bog, although the recent spell of dry weather meant that the going was nowhere near as wet as usual.  That said, at one point Ted and I still had to divert some way up onto the saddle of land between Cosdon and Little Hound Tor, before regaining our original route lower down.

Then another ancient site – the White Moor stone circle – came into view ahead of us.  As this was Ted’s first visit, I was interested to see what he would make of it.  Some people claim to feel a tingling like an electric shock when they touch any part of a stone circle, and folk tales persist of horses jibbing when asked to cross them.  No such problems for my irreverent dog, although surprisingly he did fail to mark his territory. 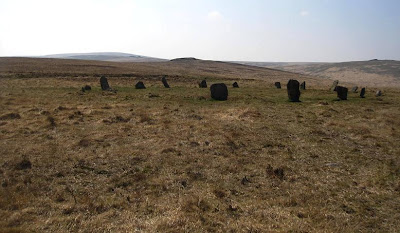 According to my book of walks, this was the furthest point of our foray, but no way were Ted and I going to stop there, as a little further on stands White Moor stone, an ancient menhir which has also served as a boundstone for many centuries.  We reached it in a few moments.  Again, no cocking from Ted.  Curious. 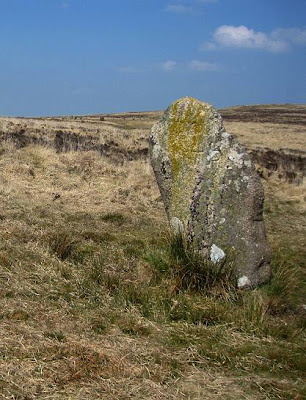 I still didn’t feel ready to head for home, away from the hypnotic heart of the moor, and neither did Ted, so we continued for an extra mile and a half, first to Hound Tor (that is, another Hound Tor, not the more impressive one to the south and east) and then Wild Tor, which we passed last summer when we walked out to Ted Hughes’ memorial stone. 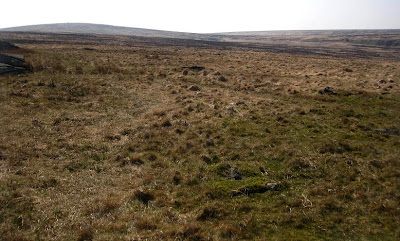 I climbed up onto one of the granite stacks to get a good shot of Taw Head and Hangingstone Hill, and only discovered it was a logan stone or nutcracker when it started rocking under my feet.  Figuring that the moment the earth moves was probably as good as it was going to get, I persuaded Ted that it was finally time to turn back. 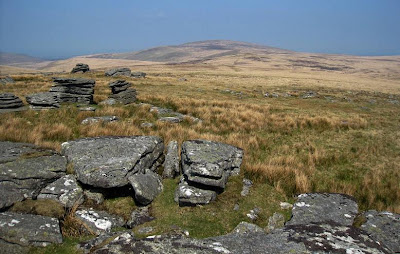 So we retraced our steps to the stone circle and then continued on over Little Hound Tor and Cosdon to the beacon and trig point at its summit. 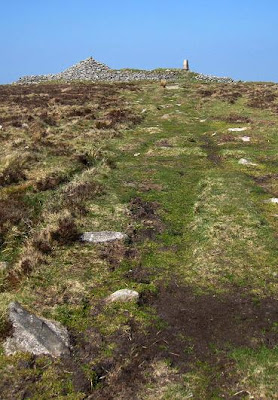 I know I always claim this, but on a clear day there is a fabled view from here which encompasses both the English Channel and the distant Severn Sea.  Today it was far too hazy to see anything much  - even Wild Tor, less than three miles away, was barely discernible.   I didn’t mind, though; if anything, horizons disappearing into mist only enhance Dartmoor’s isolate, otherworldly atmosphere.  I was reminded of Ted Hughes’ memorable description of Dartmoor and Exmoor in ‘Rain-Charm for the Duchy’ as ‘two stone-age hands/cupped and brimming, lifted, an offering’, and I felt lifted up with them.

As we headed back down the northern side of Cosdon, South Zeal with its distinctive mediaeval burgage plots came back into view. A short detour from our route took Ted and I down through the village, with time for a brief stop in St Mary’s, the tiny Chapel of Ease in the middle of the high street. 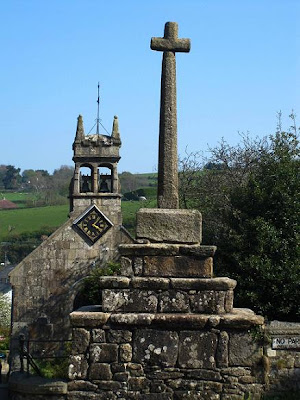 On the way back to the coast I ignored the sat nav’s advice to take the A30 and A380 and returned via the lovely Wrey valley.  After 10 miles across challenging terrain I felt lulled rather than exhausted. Now to find a way of feeling as free and alive in my daily routine as I do on Dartmoor.

Posted by Deborah Harvey Poetry at 12:03