As far as visiting Dartmoor is concerned, Easter is my New Year, and the first visit to my patch a taking stock of the months that have passed since the previous one, and of those to come.
The biscuit tin by the sea is only five minutes from the beach, but being contrary, my first footing has to be on Dartmoor. To that purpose, Ted and I were up and out early(ish) last Friday despite the grey and misty weather. 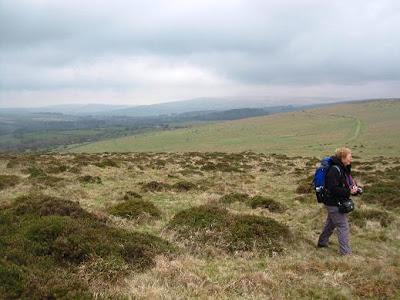 At Harford Gate, we rendez-voused with my co-worker Ellie, her partner, Vicky, and their two Lab-Collie crosses, Teddy and Dougal, who were camping close by.

Our walk took us up onto the dismantled tramway that runs from the former Red Lake China Clay pits, high on the moor, to Ivybridge. This offered easy walking below Hangershell Rock and Weatherdon Hill, with the added advantage of avoiding cattle which both Ellie and Ted (my Ted) dislike. 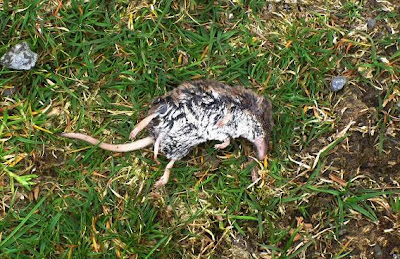 This is a dead thing I saw – an (extraordinarily well-endowed) water shrew, perhaps? (Or maybe they are all that well hung?)

We then climbed to the cairns south of Butterdon Hill and strolled along the ridge to Western Beacon, the southernmost peak on Dartmoor. 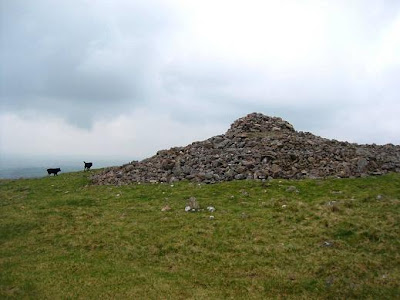 From here there’s often a spectacular view of the coast, but today it was murky.  Though we agreed that Dartmoor is best viewed in a mantle of cloud, and as it was Ellie and Vicky’s first walk there, it was as well they saw it in all its brooding magnificence. 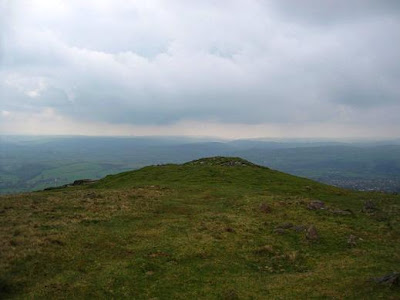 We then wandered back to the car, stopping off on the way at Butter Brook, where the dogs had a good splash and a play, and the humans teetered over the stepping stones. 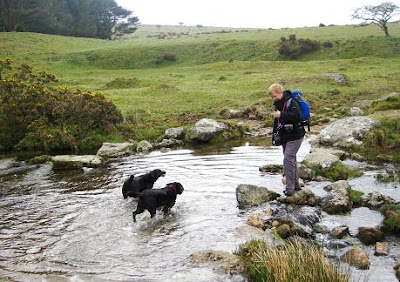 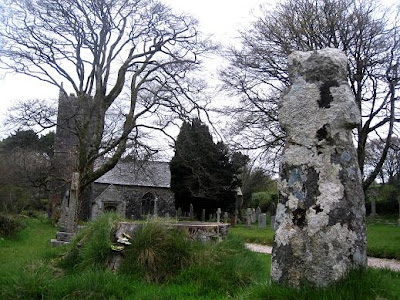 Having said goodbye to our friends,Ted and I popped into Harford’s Church of St Petroc.  Best feature was the rugged cross in the churchyard, a former wayside cross ‘rediscovered’ in 1909 being used as a gatepost. 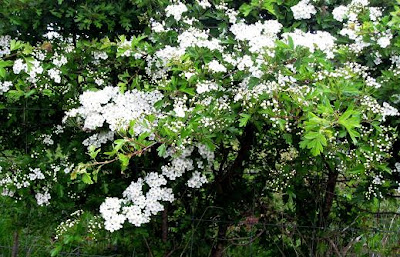 Later, back at Holcombe, my son Samuel, Ted and I went for our traditional evening walk a short way along the coast path and back via footpaths and fields – a sort of literal and spiritual beating of the bounds.

We were too early for the bats which throng the lane from dusk, but Ted alerted me to our first swallow of the year as it fluttered seductively past. Another first was this whitethorn in one of the more sheltered spots on the coast path, its gorgeous, sexy perfume so much more alluring than the pong of alexanders, lamentably ubiquitous this time of year. 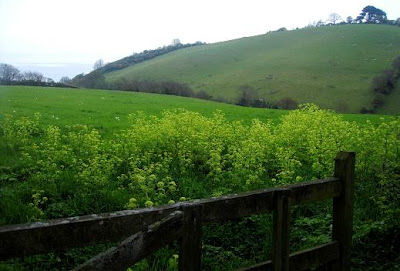 The fields were sprouting with some cereal crop, while the bluebell wood was still relentlessly green.  It will look spectacular in a couple of weeks’ time, but alas, I shall be in Bristol and shan't see it.