Graffiti with serifs being one of my longer-standing obsessions, I'm so pleased that my poem of the same name has made a small niche for itself in the world, as one of six prize-winning entries in the Staffordshire International Poetry Competition. 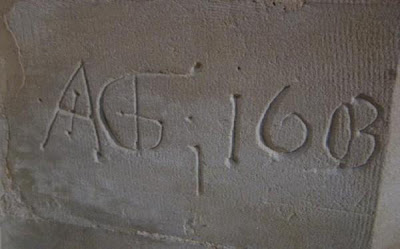 Take a breath and try the handle.
At first it might stick as if locked,
but more often than not
the door will open. Step inside.
You will undoubtedly need more light.
The switches are by the door on the right,
next to the safe.

What you see depends on the season:
at Harvest, wilting displays of leaves, teasels,
a wrinkling apple,
hydrangeas arranged on each ledge;
in the curtained-off vestry, after Epiphany,
a forsaken infant Jesus, six tinsel haloes
and a gold star on a stick.

And at all times battalions of jars and spare vases,
a Hoover hidden behind a pew,
a mildewed hymnal, several pipistrelle umbrellas.
The font in the corner early Norman:
generations of babies baptised
to die in contagions, battles and matters
of no importance.

Sometimes a detail hints at a fate:
you’ll read the names of three priests ordained
in the Year of our Lord,
Thirteen Hundred and Forty-Eight.
But best is the esoteric: initials
and backward-facing dates, graffiti with serifs
scratched during a boring Puritan sermon;

the stone underfoot the grave of three children,
carved at each corner with uncouth angels,
sticking out tongues;
the lilies stitched on Italian damask
seven centuries gone by,
as faded and fragile
as the weft and warp of time. 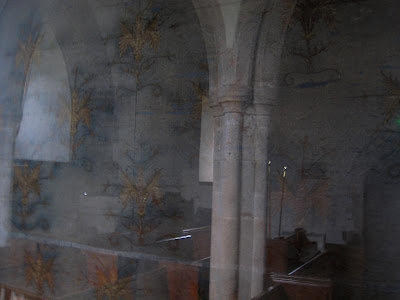 Posted by Deborah Harvey Poetry at 12:05