A Grand Day Out, Morris Traveller-Style

I submitted a photo of the fifteenth century mural warning against lust in Branscombe Church for the cover of my poetry collection some months ago, but making the acquaintance of my artist friend Dru offered the opportunity of securing a much better quality picture, along with the perfect excuse for an early spring jaunt down to Devon, so the Thursday before last we piled into Dru's Morris Traveller – with Ted in tow – for a grand day out early Seventies style.

It was a blustery morning but the Traveller forayed gallantly down the M5, the only hitch occuring after we’d branched off into East Devon, when a passing lorry sucked the back door open.  After hastily securing it, Dru admitted that the same thing had happened once before, in an earlier car. ‘Did you lose anything?’ I asked, concerned.  ‘In a manner of speaking, yes,’ she replied. 'The lurcher.’  (Apparently, said dog had sat in the middle of the road, uninjured but somewhat puzzled.  I was glad Ted was curled up at my feet, even though he kept fussing and fidgeting, clearly miffed at the indignity of sharing the passenger footwell with my boots.) 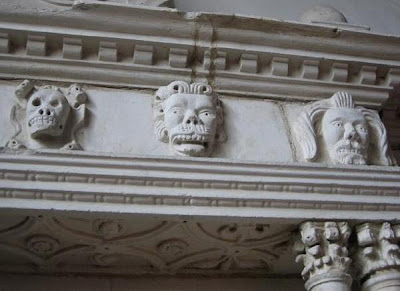 Having arrived in Branscombe, we headed straight for the St Winifred’s.  To our phew it was open and the mural in question was unobscured by scaffolding or damp or anything else unsightly.  While Dru and her unfeasibly large telephoto lens did the business, I prowled around the church rediscovering old delights, like the 1608 tomb of Anne Bartlett with its dentally enhanced skull and accompanying male heads, two bizarrely leonine, two more with decidedly flouncy hair-dos.

After exploring the churchyard, we progressed to Branscombe Mouth, where it was sheltered enough to picnic on the beach.  I’d brought homemade almond and chocolate chip biscuits and oranges, but Dru trumped that easily with lashings of salad drizzled with homemade pomegranate and caraway seed dressing, cheese, salami and tea freshly brewed on her small stove.  Such a lovely change to be mothered instead of doing it myself; I can’t remember the last time that happened.

We then wandered up over the cliff and onto the coast path which passes below the line of the cliffs but some way above the sea, through an old landslip dating from 1790, alternatively called the Undercliff or Under Hooken.  It's one of my favourite stretches, being the most extraordinary terrain, wooded and full of jungly humps and hollows, with predominantly chalk rocks towering overhead and the grey and brown sea prowling below.  The last time I was here it was August and it had felt very sultry and exotic and un-English.  That effect was muted this time as the trees were only just beginning to leaf on this last day of March, but their comparative bareness afforded better views of the cliffs, which have a hint of Arizona about them (or so I like to think). 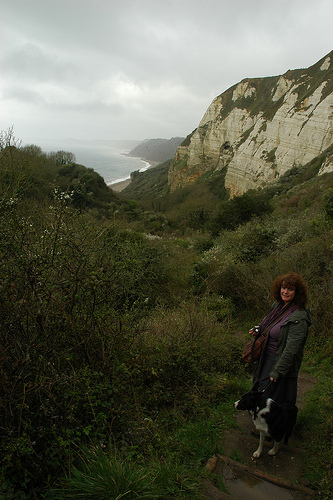 We walked as far as the point where the path rises to the top of the cliff, with Dru identifying the call of the chiff-chaff (‘chiff-chaff’) and spotting a peregrine falcon on top of one of the very distinctive butte-style outcrops of rock.  All stuff I would have missed in my customary walking daydream.  We then retraced our steps to the car park.  Having decided to take the scenic route home – a far more suitable route in a Traveller – we headed north through Axminster, Chard, Crewkerne and Martock before stopping off in Long Sutton to visit the extremely gaudy Church of the Holy Trinity.  The pulpit dates from 1455-58 and has been embellished with 20th century statues of the apostles, presumably because the originals were removed during one of our earlier Cultural Revolutions.  As is customary, each poor soul – or glorious martyr – is bearing the instruments of his execution. 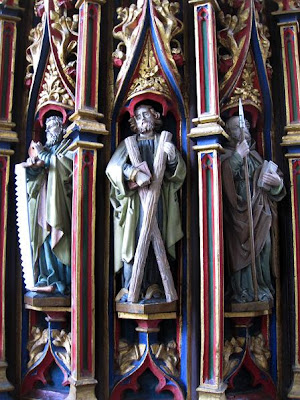 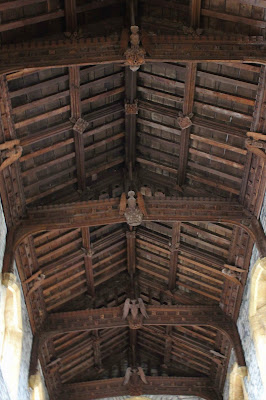 There was also a wonderful roof of carved angels. 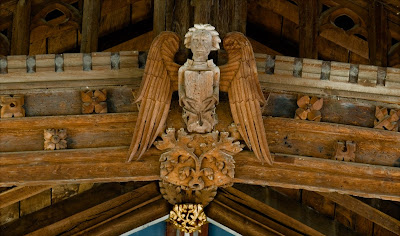 On then to Huish Episcopi, which I know for its Church of St Mary with its beautiful Burne-Jones window.  Dru, however, had a different destination in mind, and we stopped at the Rose and Crown (known locally as Eli’s) for a swift half pint, served from the flagstoned cellar in the absence of a bar (even though it was closed).  I had cider from nearby Burrow Hill and hell’s teeth, it was good; Dru had a beer from Teignworthy brewery, which is just down the road and across the river from my caravan in Devon. I think I must sample some of their Harvey’s Special Brew when I’m next down there as it has my name written all over it.

Our next stop was Glastonbury to see if we could persuade one or two of the shops to take our range of Three Hares cards.  Unfortunately the buyer in the most promising emporium was away on holiday, but we left a sample of all three with the very enthusiastic shop assistant. 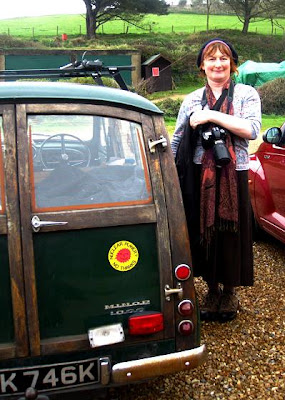 On then through Shepton Mallet, reminiscing about the days of the Babycham factory with its giant fawn atop – still there apparently, but down at ground level rather than on the roof.  Then back through Bristol to home, slightly cidrous and in a sublimely good mood, thanks to  the possession of a far more professional cover photograph than I would have had otherwise. Thanks, Dru! 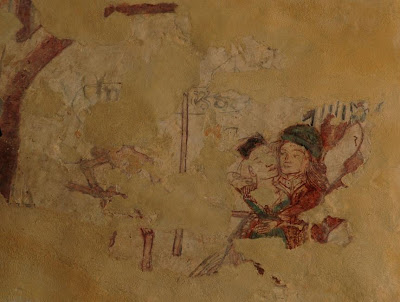 Posted by Deborah Harvey Poetry at 09:35