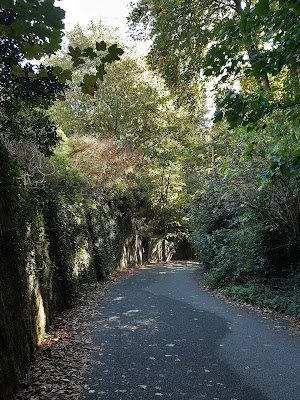 My sons and I had planned to visit our old haunt of South Devon a while before our dog, Ted, died, and his loss coloured the trip quite differently. We were lucky enough to have a bright day, though, with a stiff breeze on a nearly new moon and a high tide to make it memorable, and to take us a little bit further along the lane of grieving. 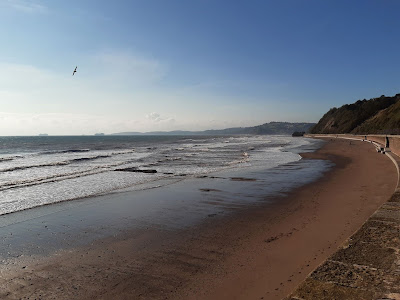 My childhood holidays were spent in this place, as were my children’s; it also has ancestral connections, though these weren’t uncovered before we’d already made a home from home of it in Holcombe. Important to be here then. Hard to be here without Ted chasing sea gulls and trains. 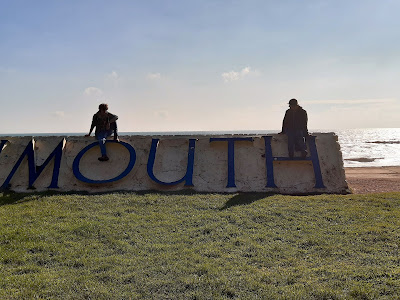 In Teignmouth we had lunch in the Ship Inn, my first pub visit in months, though it was far removed from any normal pub experience. The food was good, though, and I felt as safe as it’s possible to feel these days. 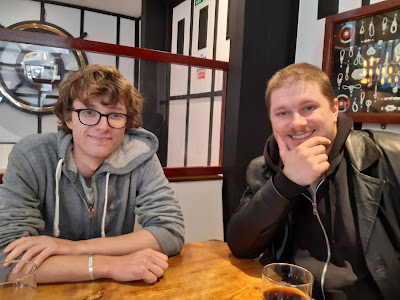 After lunch we waited on the back beach to catch the ferry to Shaldon. 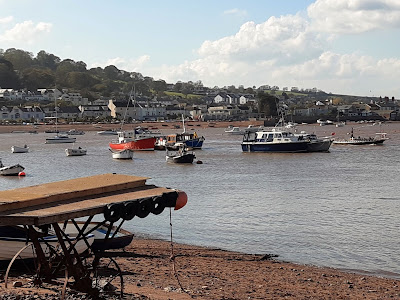 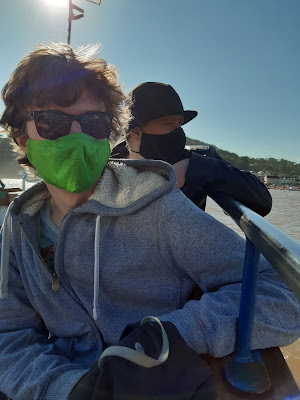 A helpful sign advised that the last return trip would be at 3pm because of the tide, which was already full and rising rapidly, so that limited our time there, but to be honest I’m grateful just to get a glimpse of my best places these days. 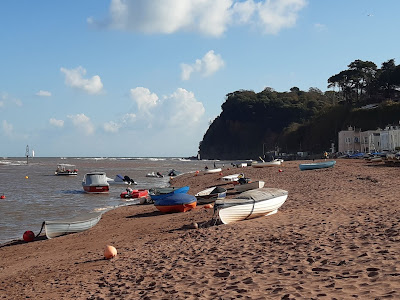 We scavenged our way along the beach for sea glass, most of which is in Son the Younger’s pocket rather than this photo. 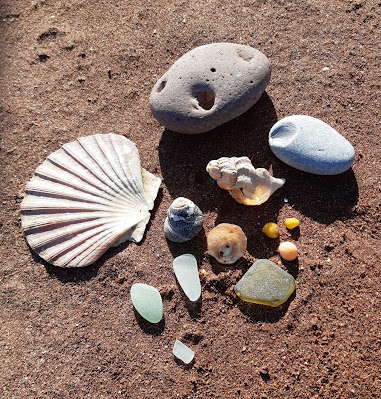 The boys then walked back to Teignmouth over the bridge, but my back was bad and I needed that boat. 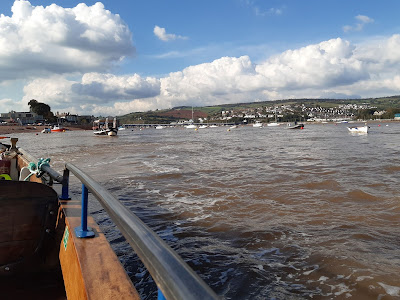 It was so hard without Ted who absolutely loved sitting up on the bench and watching everything going on. I was glad I had a face mask and sunglasses on so no one could see me weeping. 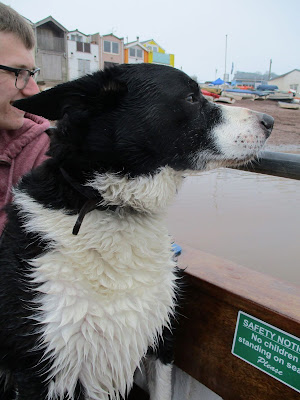 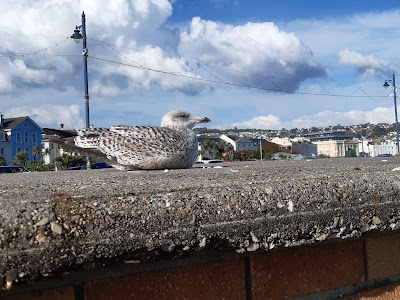 Away from the shelter of the estuary, the Channel was beating hard against the promenade. Can’t count how many times I’ve dodged its spray over the years. 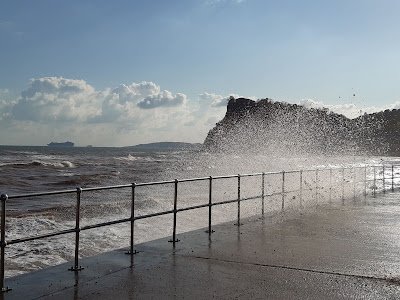 I sat by the pier for a bit to wait for my sons, and, as has happened so often lately, the local dogs smelt my sorrow and came over to say a gentle hello. 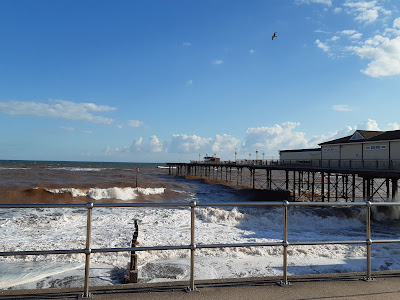 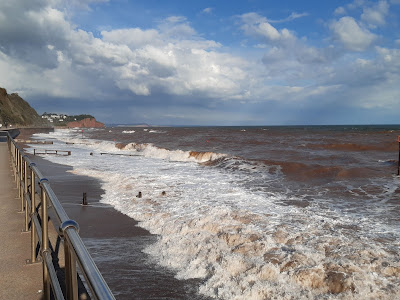 All along the sea wall back to Holcombe the waves were unrelenting. It was glorious. 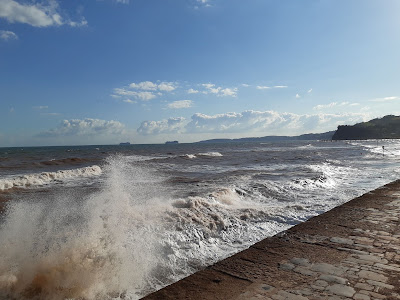 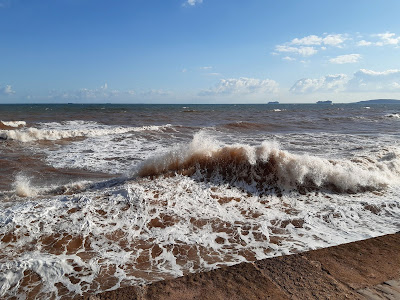 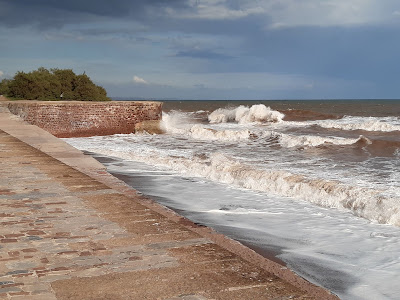 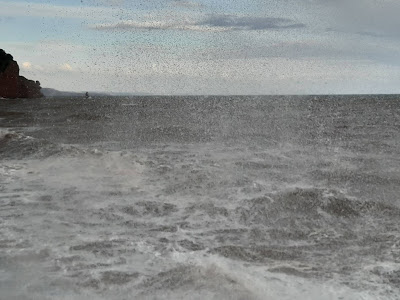 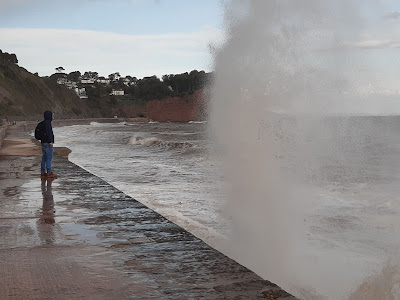 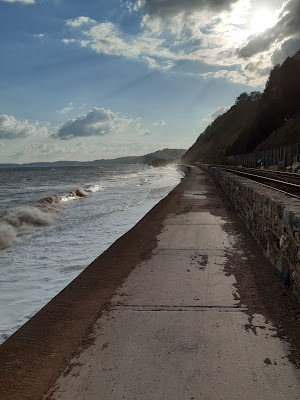 We found a bit of my father’s graffiti still hanging on, though with Network Rail’s plans for this  stretch of the track, it won’t be for much longer. 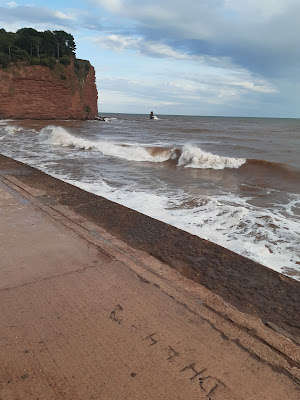 Likewise, doubtless, these steps, which we took our chances on. Hard to avoid waves on the slippery, twisting descent, and I’m not much good at scampering these days. 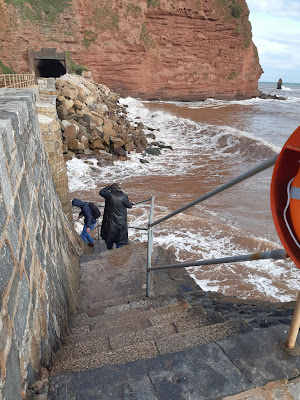 Back in Bristol there was a stormy sunset to round off our day. Another milestone. 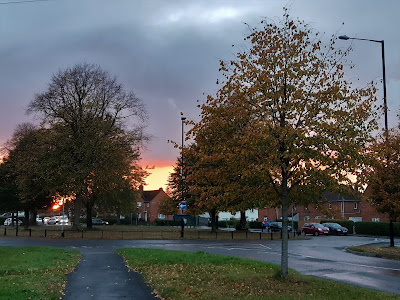 Posted by Deborah Harvey Poetry at 14:46