Learning Finity and the persistence of stories

I'm very pleased to be able to post that my publishers, Ronnie Goodyer and Dawn Bauling of Indigo Dreams, are going to publish my fifth collection of poems next year. It's called Learning Finity, and it's about mythic time and how a place might change beyond recognition but still retain an imprint of the past. It's also about getting old and the mutability of everything, except, maybe, stories.

I like to think that something of the past and its people, their lives, loves and disasters, remains in a landscape. That the trees that colonnade the nave of St Mary Le Port Church, now a bombed ruin tucked behind a curtain wall of 1960s brutalist office blocks, themselves empty, are engaged in rebuilding it. And that the valerian that bursts through cracks in walls on the hillside above where the ice rink and the Locarno used to be remembers when it was patch of woodland called Fockynggrove, and was a very well frequented spot indeed.

If you've read other posts here, you'll probably guess I'm talking about Bristol, the city I was born in and which I've never managed to leave. Here I am, hanging out with local poet and bad boy, Thomas Chatterton, quite a few years ago now. 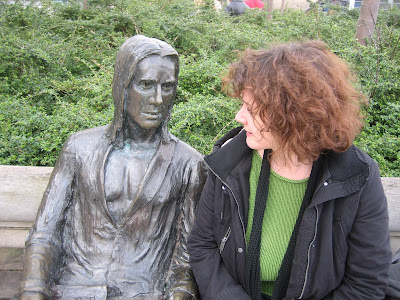 I mostly love my native city, though there are times I've been deeply ashamed of it, such as when Points West asks whether it should apologise for its slaving past and then does a vox pop stuffed with belligerent locals, who haven't fully grasped the implications of how our forefathers made its wealth. And the fact that if it weren't for Black Lives Matters protestors tearing down his statue, this city would still be commemorating Edward Colston right in its heart is excruciating.

I often wonder what my great-great grandparents, who lived and worked on Christmas Steps, right in the centre of the city, would make of it all, if they had the chance to wander around their city now, which is so different from how they remember it and which will be unrecognisable to future citizens. Everything is mutable, but stories persist. 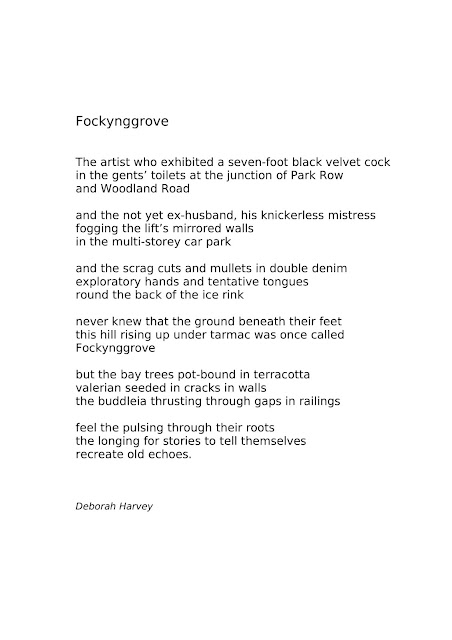 'Fockynggrove' was first published in Atrium, May 2020
Posted by Deborah Harvey Poetry at 10:32