So memorable was a previous visit to Cuckmere Haven in East Sussex that when we got the chance to return to the same area, I asked my fellow-jauntees if we could go to the opposite end of the chalk cliffs, known as the Seven Sisters, at Birling Gap. 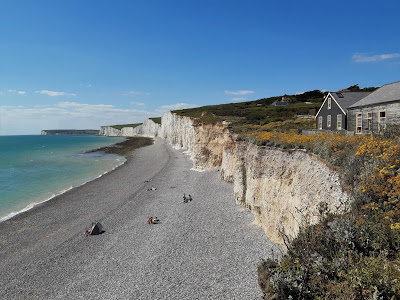 And they said yes. So we did. 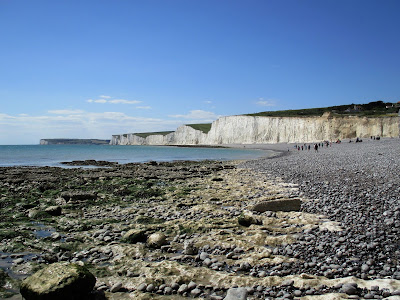 And here they are, looking west towards Cuckmere Haven, with Seaford Head beyond.

The one thing everyone knows about Birling Gap is that it's falling into the sea. Or at least the Coastguards cottages are. 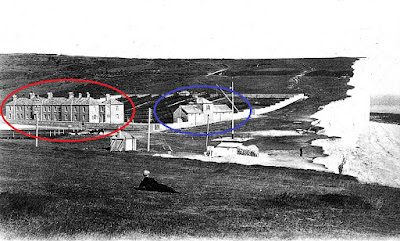 At the turn of last century there were seven of them (ringed in red). The Coastguard Watch House (ringed in blue) was lost to coastal erosion in 1926. 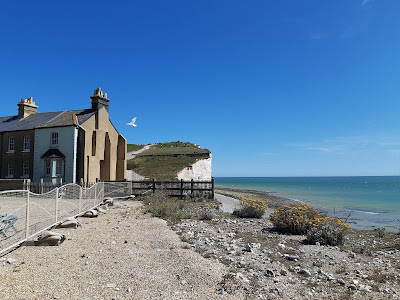 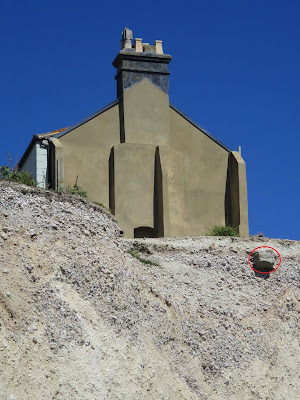 The most recent cottage to be demolished was in 2014. You can see its foundations sticking out of the cliff (far right). 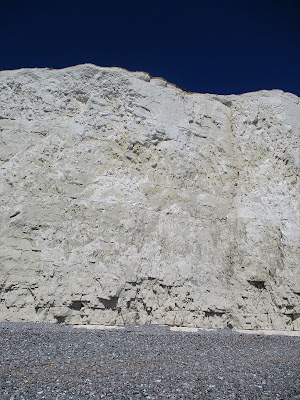 Figures vary, but the cliffs here appear to be eroding at a rate of 12 inches - or maybe as many as 36 inches - per year. Whichever's correct, that's why they're so white. 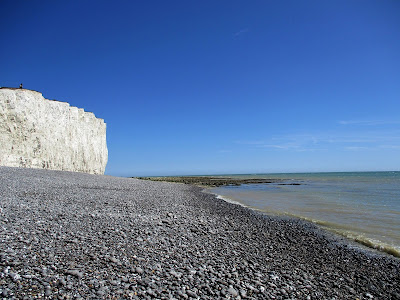 We went for a wander along the beach. It was so very different from the geology of the South West, very beautiful and also slightly disturbing. 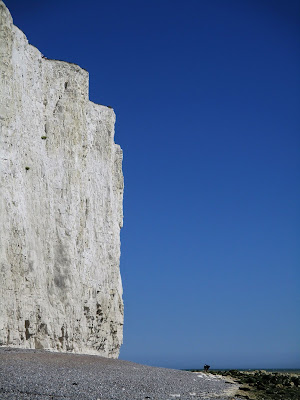 I remember when I was a very young child trying to get to sleep, I would sometimes see on the inside of my eyelids stones of the purest, smoothest white that I knew represented death.

Well, this chalk is a little like that. In fact, I wonder if, when you die, you see high white cliffs like these. 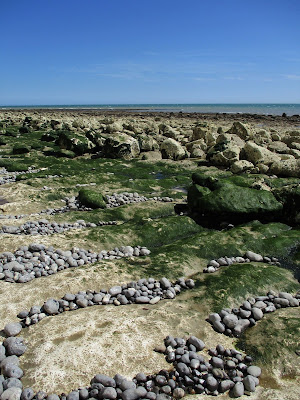 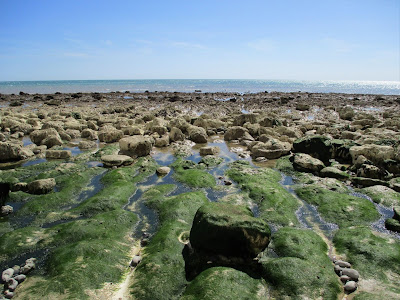 What with our drive from Bristol to Sussex taking over five hours, thanks to extensive roadworks, and a rather leisurely lunch in the pub near Beachy Head, we didn't walk far but what we saw I'll remember. 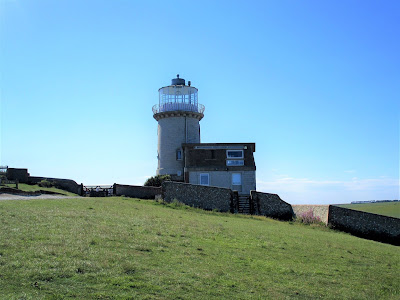 On then to Belle Tout lighthouse, which I distinctly recall being moved back from the cliff edge in a grainy black and white Blue Peter film of (probably) the 1970s. Except that it happened in 1999. 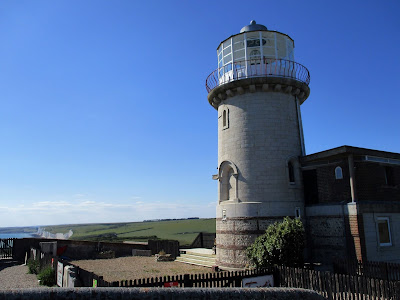 It still looks pretty close to the edge to me, but apparently it is good for a while yet and its new foundations are constructed in a way to make it easier to move next time. 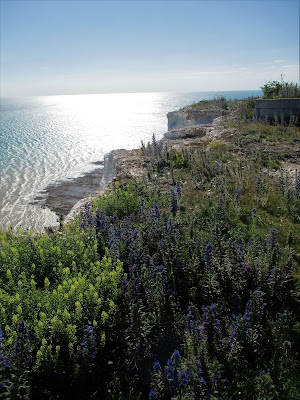 Here is some viper's bugloss and agrimony ... 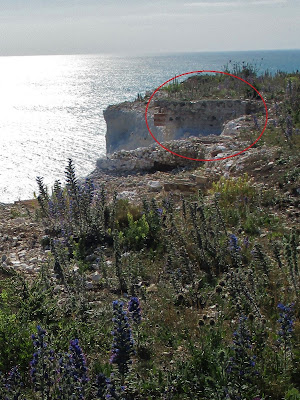 ... and again, the old foundations poking out of the cliff. 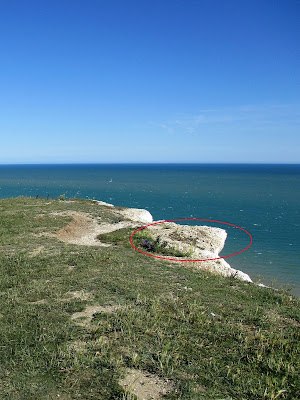 I'd taken longer to climb the hill than my sons - a cominbation of being old and taking photos - so I hadn't seen the woman who'd been standing on the jutting piece of chalk ringed in this photo. 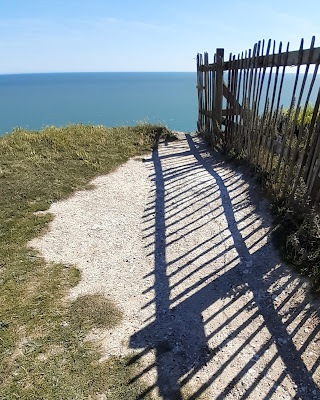 I didn't care to be so close to the edge. 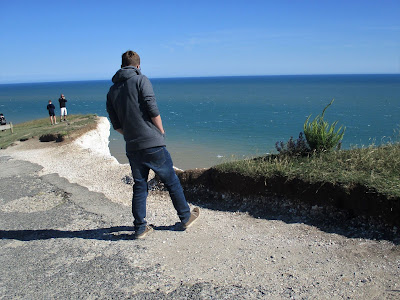 On the way back down - the slow way - I spotted my first milkwort ... 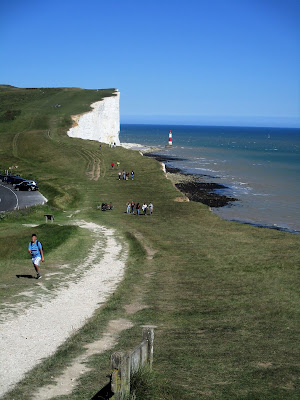 ... and up ahead, the lighthouse that replaced Belle Tout at the foot of the famous and notorious and beautiful and deadly Beachy Head. 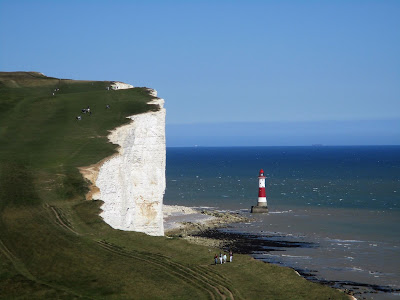 This was close enough for me. It felt like when I visited the stretch of the River Wharfe called The Strid above Bolton Abbey some years ago. That you can choose between life and death on nothing more substantial than a whim in such places. 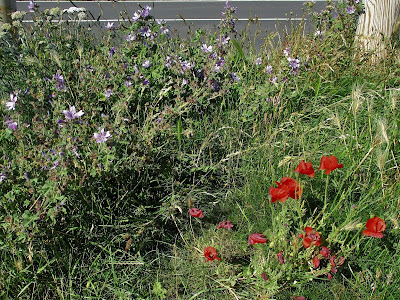 Today, I'm pleased to say, we all drove home.

Posted by Deborah Harvey Poetry at 13:44