On the Trail of Ted Hughes and Robert de Middlecote

The Yorkshireman was unimpressed. Why was there a Ted Hughes Poetry Trail just off Dartmoor at Stover Country Park? 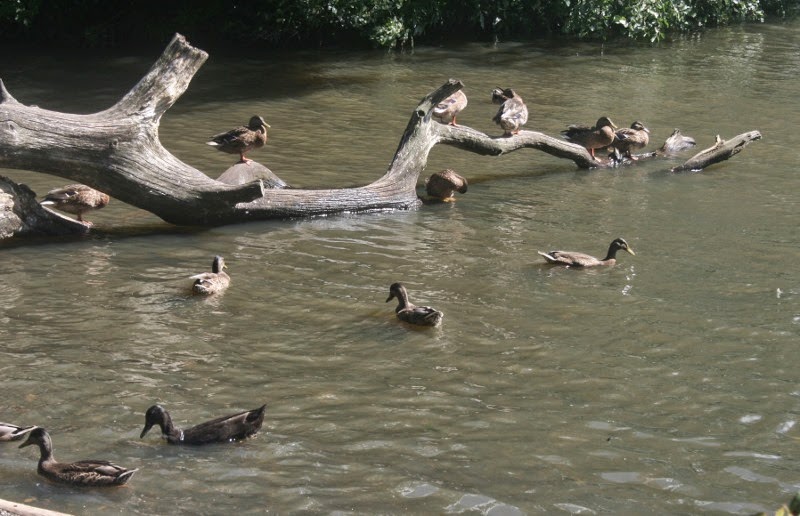 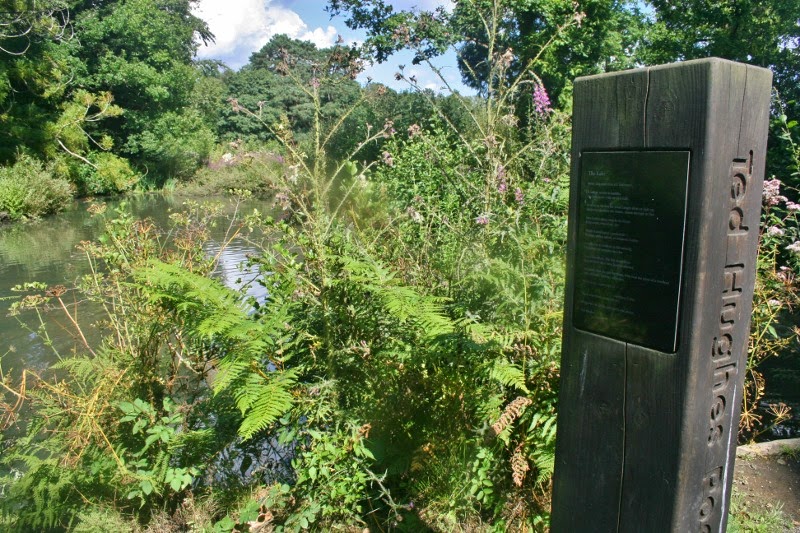 And he's right, Stover is not Ted Hughes country (though his memorial on the moor would indicate that he's an adopted son of Devon).

In fact, the poet never visited this corner of the county, but this was the site earmarked for the trail, and the council, along with Hughes' widow, Carol, and celebrated author and illustrator Raymond Briggs, made the most of its modest charms. 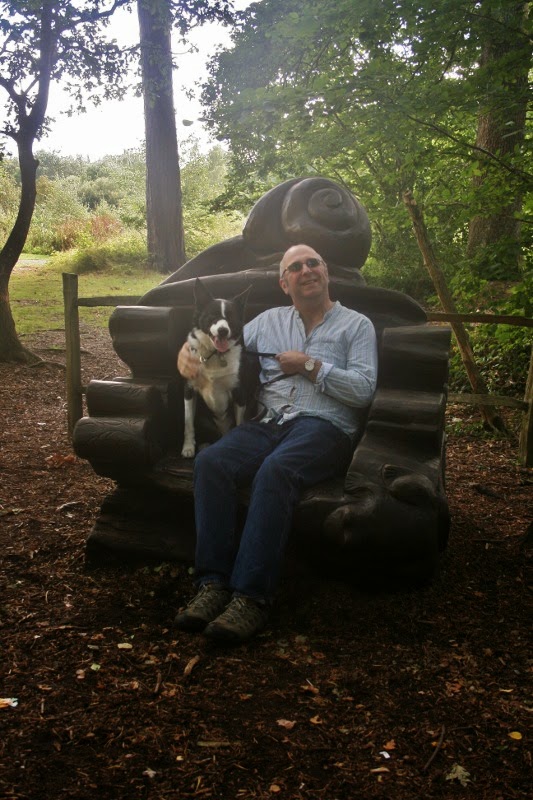 A nature reserve is the perfect place to display some of the poems of that great nature poet, and whilst this visit I missed the synchronicity of seeing a cormorant across the lake as I read the poem 'A Cormorant', there were sand martins swooping over the water instead and they were great.


Even the Yorkshireman came round in the end. 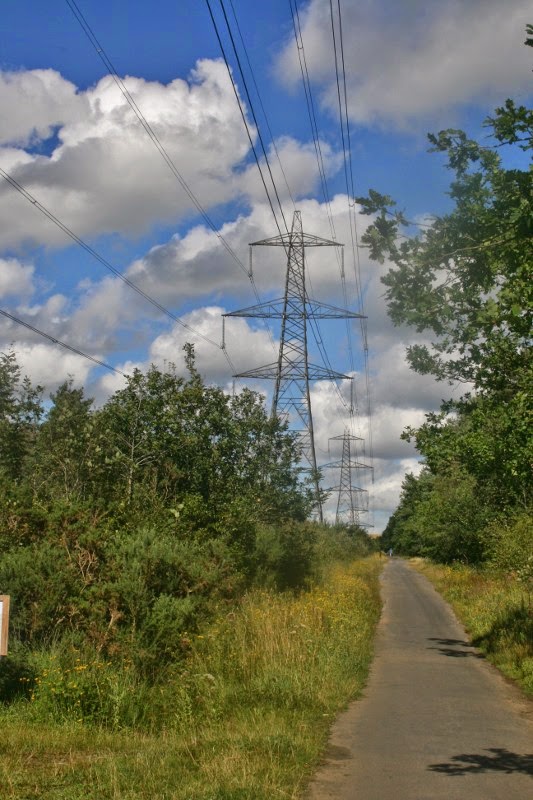 My favourite bit of the trail is the nondescript valley, within earshot of the busy A38, through which a series of enormous pylons fizzle and spit.  Even poetry can't rescue this place, I grumped, the first time I visited.  But then you get to the middle of the valley and read this:

Taller than a house, the Iron Man stood at the top of the cliff, on the very brink, in the darkness. 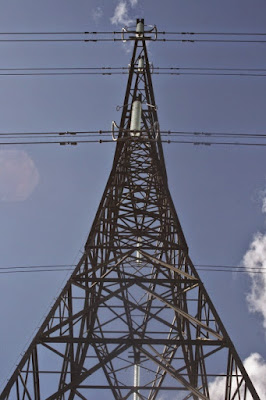 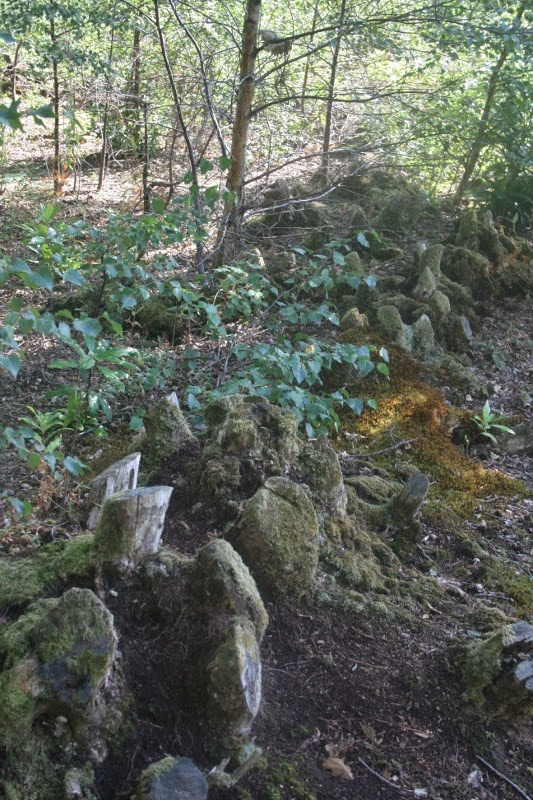 Genius. After that,  how can mossy tree stumps not be the vertebrae of a monster surfacing through earth? 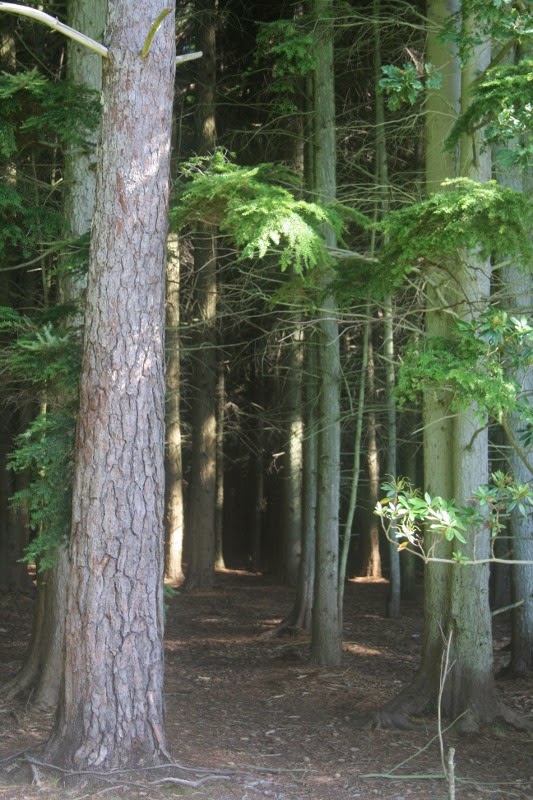 Or the forest not harbour a trail of breadcrumbs? 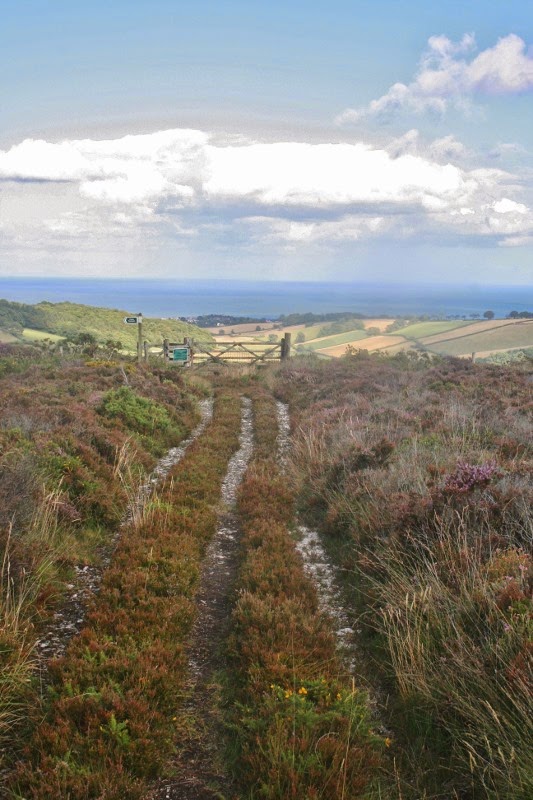 Talking of which, let's follow this path of white flint to Lidwell Chapel, high on Haldon Moor behind the biscuit tin by the sea.  The first time I ever visited it, on my own, I was so spooked that I vowed never to go there ever again.  And of course, I have failed  to stick to my resolution because as soon as you mention the place and your reaction to it, any self-respecting walking companion wants to go there.

Lidwell (or Lady's Well) was most likely a pagan place of worship long before the advent of Christianity, on account of its well. 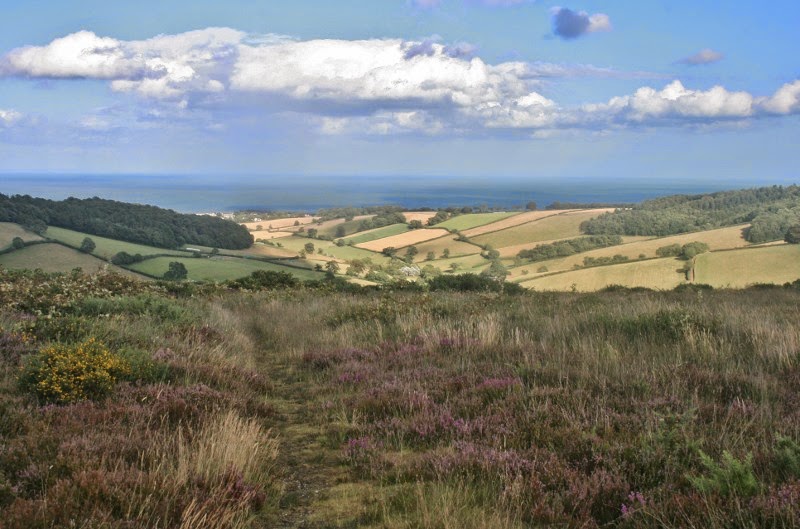 The isolated chapel was built in the 13th century and dedicated either to Our Lady or St Mary Magdalene.  There are records of mass being held there in the 14th century and of it being a place of pilgrimage. 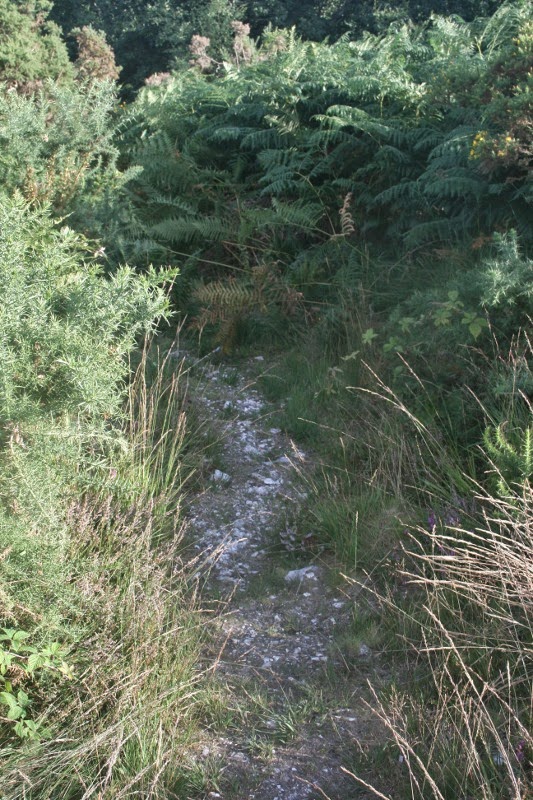 The legend of Lidwell concerns a monk called Robert de Middlecote, who on 28th March 1328 was accused of 'mistreating' Agnes, the daughter of Roger the Miller, at the small, private Chapel of La Wallen at Gidleigh on . was pregnant and the monk caused the death of her unborn child.

De Middlecote was to appear before Thomas de Chageforde, the King's Justice, but vanished before the trial took place. 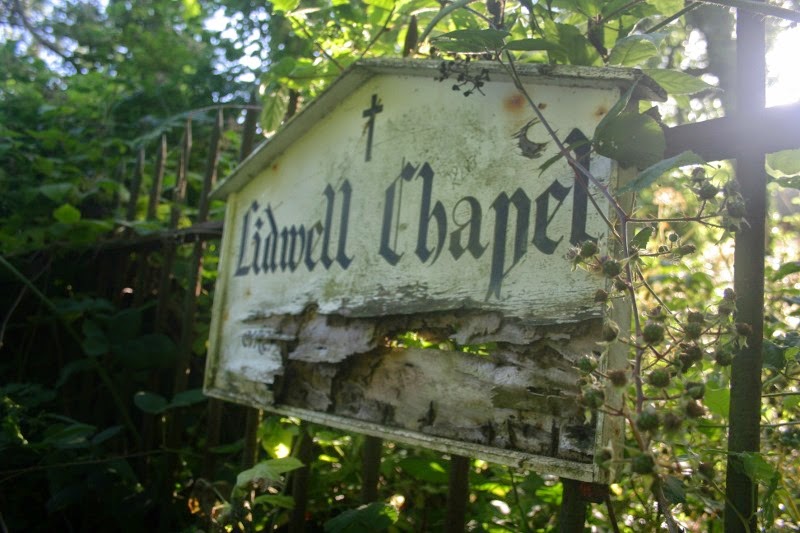 He then turned up in Lidwell, where he apparently spent his days listening to the confessions of pilgrims and nights in search of passing travellers whom he would entice to the chapel with offers of food and shelter. 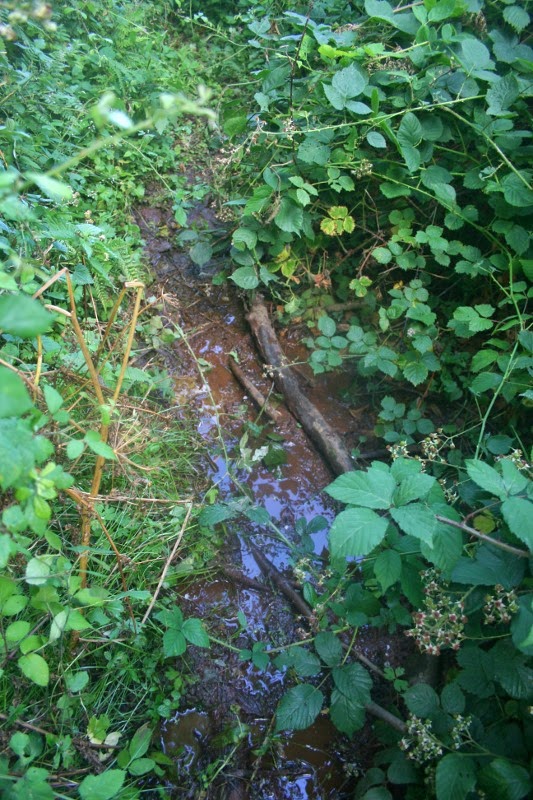 The weary and hungry travellers, seeing that he was a monk, would gladly take up his offer, but the meal they were served had been laced with a soporific, and once they were semi-conscious, de Middlecote would stab them, rob them of their valuables, and throw their bodies into the Holy Well just inside the chapel door.

In due course the monk met his match.  A sailor accepted his hospitality and whilst in prayer, glimpsed Brother Robert preparing to pounce with his knife. 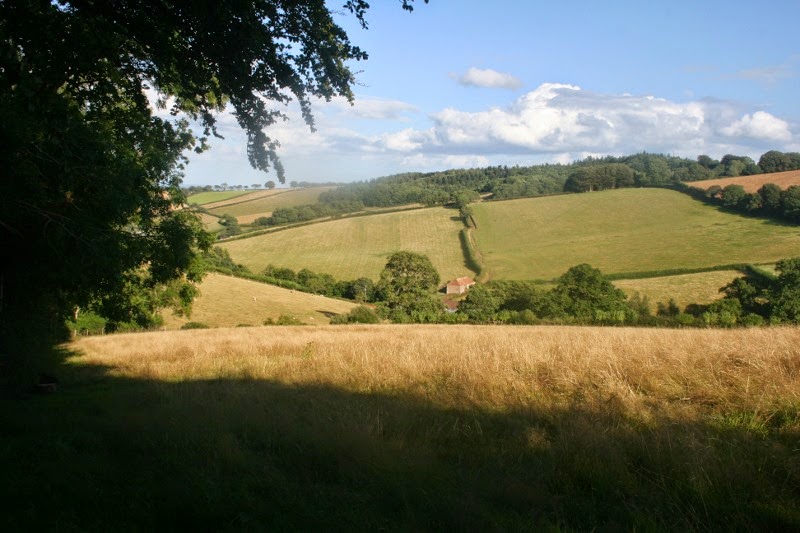 In the struggle, de Middlecote toppled into the well.  The sailor then ran to the nearby farm for help and with the farmer hauled the murderer back out, along with a bucketful of decomposing remains. 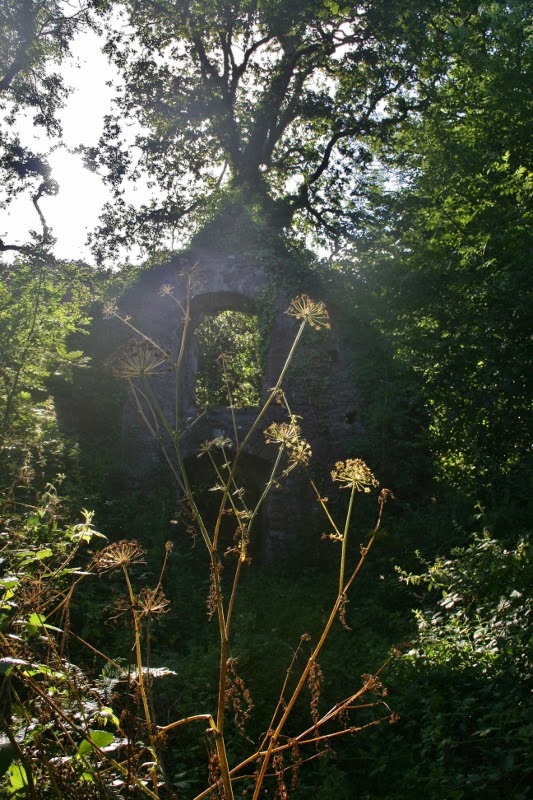 If you think this sounds improbable, the Bishop of Exeter's register for the year 1329 contains an entry relating to the execution of a hermit monk, one Robert de Middlecote, who had been convicted of murder.  You could argue that he is 's first documented serial killer. 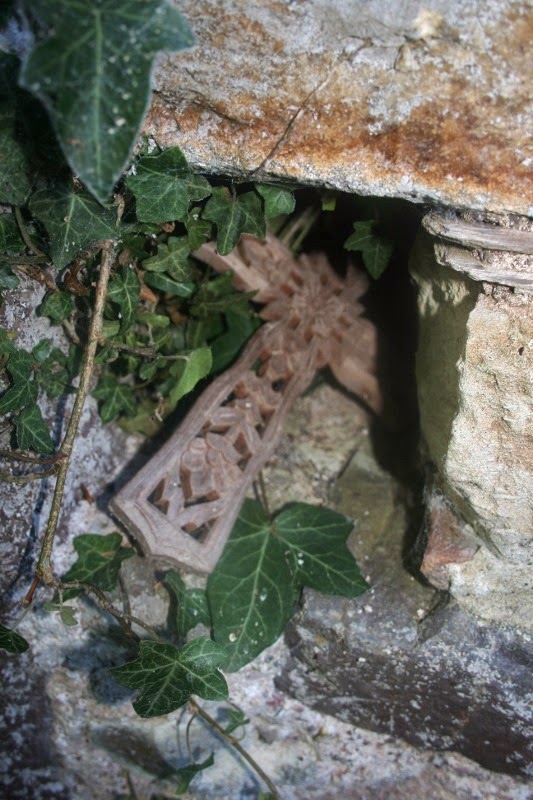 Both the footpath and the Chapel itself were far more overgrown than the last time I visited, some six years ago.  Whatever the truth of the story, there's a decidedly disconcerting atmosphere to the place and  I was glad to see this cross here, tucked in a niche in the arch which is just about all that still stands of the building.

You should do what you can for unquiet spirits.


The Path to Lidwell

Clouds drag these hills. They do not stay.
Seasons stream beneath my feet,
shingle in time’s undertow.
I remember the sea, its rattle and hiss
on the distant shore.  Now it lights
a silent horizon I can’t reach.

I have seen trees
seed themselves, moulder, fall.
The sediment of centuries is thick
beneath my nails. So many years
have wiped my mind, effaced his gaze
yet his invitation prickles in my brain

and the treachery of heather
that hid a path of flint
as white as crumb!
Oh, I was lulled by the hymn of bees –
I took the cross on his brow
for the mark of a man of God.

No gorse snagged my skirts in anxious warning.
Every rock stood mute and watched.
They’d seen it all before –
the weary pilgrim, holy well,
the glimmering welcome of the chapel lit within.
My saviour smiled as I confessed

and absolved me of my sin,
my salvation a tepid broth
of destroying angels.
I heard them singing as their blackening
flowers blossomed in my eyes.
I didn’t feel his knife.

There’s nothing living here at all,
save an occasional dull green
slithering in the trees.
The path is broken bone and skull.
I am pinned to this red soil by dearth of grace.
Some stains bleed too deep to be erased.

This poem is in my second collection, Map Reading For Beginners, published by Indigo Dreams Publishing.


Posted by Deborah Harvey Poetry at 07:20