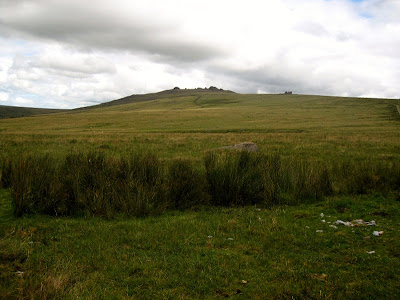 It was hot.  Too hot.  So armed with my brand new waterproof walking shoes - no, that's not right ... shod in my shoes, I drove up to Four Winds on Dartmoor with Son the Younger and Ted.

I've long wanted to climb Great Mis Tor, having travelled past and photographed and written about it for years, and the added draw up a Tor named after the cloud that so often shrouds it would be a breeze to take edge off the muggy heat.  Four Winds ... Great Mists ... obvious, innit. 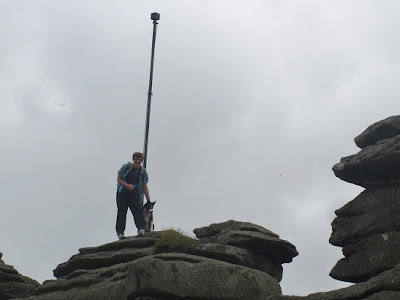 So we climbed it - and there was not a breath of wind.  If the flag had been flying, it would have clung limply to the flagpole.  (Although it was good that it wasn't, this being the edge of the Merrivale Range Danger Area.) 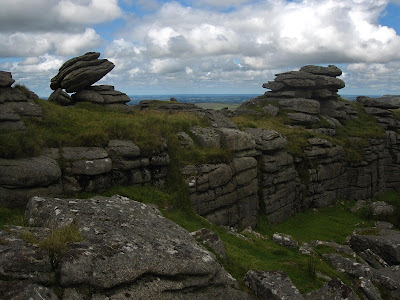 We mopped the sweat from our brows and surveyed the rock formations. Sometimes it's hard to remember that this isn't a massive art installation or grandiose folly, but the work of fire and molten rock hundreds of millions of years ago, with subsequent weathering by the always  - or almost always - present winds. 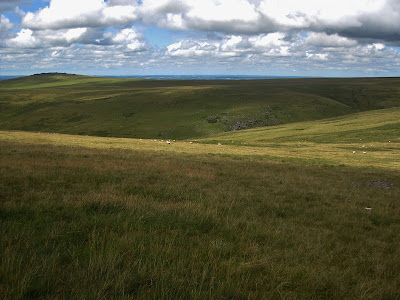 Looking out over the Walkham Valley to White Tor. 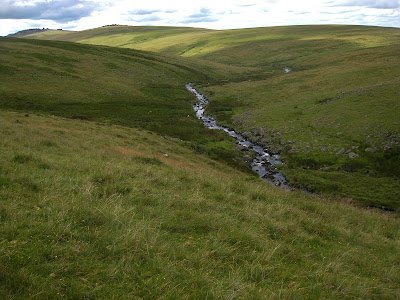 In the distance and on the opposite side of the River Walkham we could see Great Staple Tor and Roos Tor, two of the highlights on our route.  To get to them we would have to descend to the bottom of the valley and find somewhere to cross - not an easy feat considering how wet this summer has been. 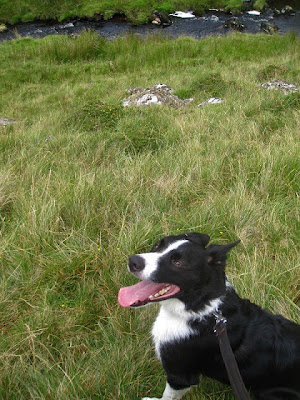 It was tiring scrambling over boulders and squelching along boggy stretches of bank, and I soon discovered that my brand new waterproof walking shoes weren't waterproof at all, grr.  Ted was in his element, however, even though he had to stay on his lead as there were so many sheep about.

Eventually we found a crossing point although half way over I had to throw the map, book and camera over onto the opposite bank so that I could balance properly.  But a Dartmoor walk isn't a Dartmoor walk unless you spend at least some of the time teetering on top of a sharp-edged boulder in the middle of a fast-flowing stream of peat-stained water. 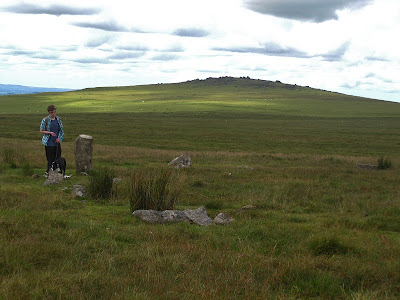 What I was looking forward to as a breezy saunter along the ridge to Roos Tor turned out to be more of a tortuous hobble over bog and choppy grass, with sweat stinging my eyes.  It was good to come across the neolithic Langstone Moor Stone Circle and rest for a while.  Not that there is much of it left intact, US servicemen having used the stones for target practice during World War II.  Oh well, I suppose it makes a change from Victorian farmers pinching them for gateposts. 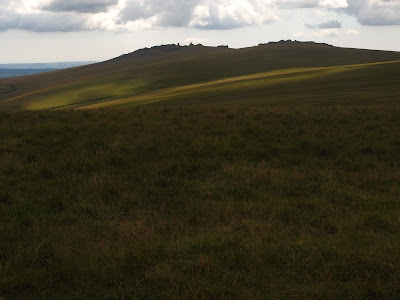 Meanwhile, the views - sunsplash and shadow - were just majestic.   On the slopes of Great Mis Tor, there was a shadow shaped like a cow. 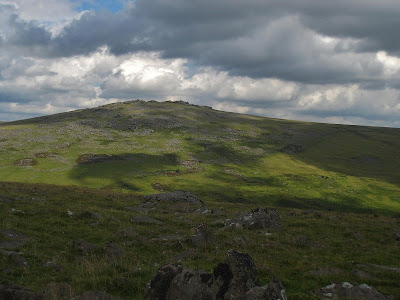 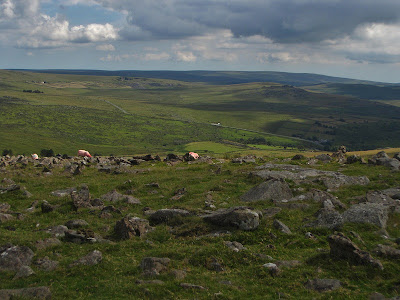 My favourite sort of days on Dartmoor are ones where there is an interplay of shadow and cloud.  Yesterday was perfect - apart from the humidity.  This the view from Roos Tor ... 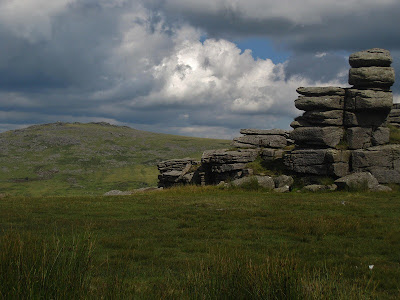 ... and this from the giant doorjambs of Great Staple Tor. 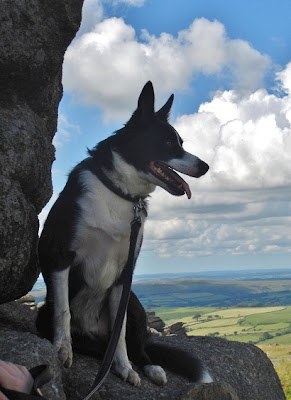 Often in walking books, pictures of the author's dog feature and if it's a border collie, it will almost always be posing on a picturesque bit of rock.  They have such a sense of occasion and Ted is no exception. 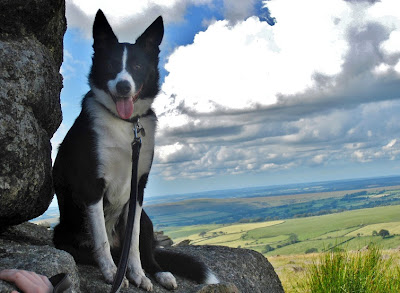 In fact, he can't stop grinning for the camera. 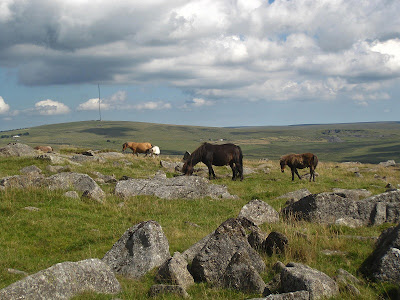 Between Great and Middle Staple Tors, there was a herd of wild ponies, with which Ted coped very well. 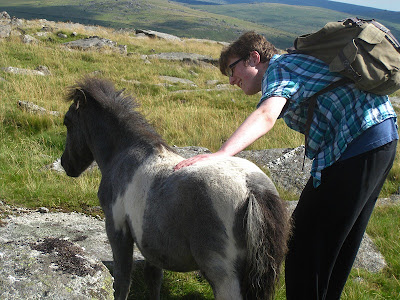 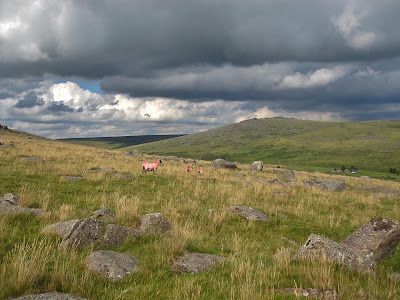 The prospect of refreshment in the Dartmoor Inn put a spring in our step as we descended from Middle Staple Tor to Merrivale Quarry, which was the last Dartmoor quarry to close in 1997.  Like all the other disused quarried on the moor, the workings are now flooded. 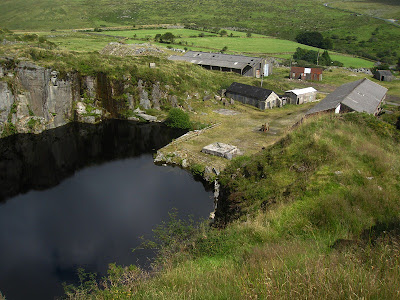 It was a relief to dive into a pint of cider and a bowl of ice cream on a pub bench bearing the imprint of generations of quarrymen's bottoms.  Would have stayed there in the cool of the bar a lot longer, but there was still a mile to walk back to the car. 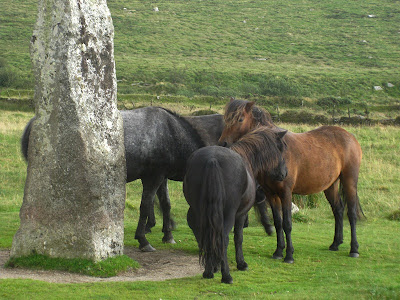 Although we were knackered, we opted to detour through the complex of stone rows, circles, cairns, cists and standing stones.  This area is also called the Plague Market, because it's where moorfolk and townfolk would swap goods and money in times of plague. 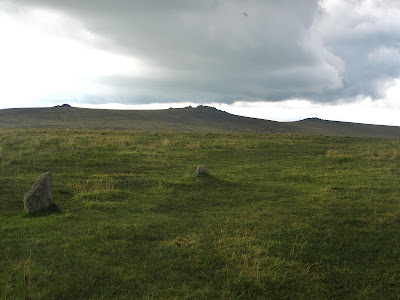 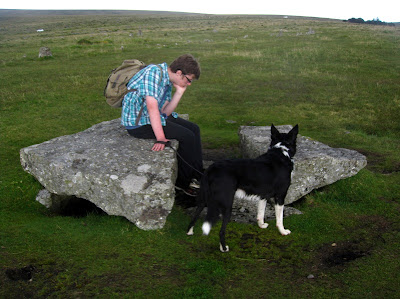 Son the Younger and Ted trying to see if there are any bodies remaining in this cist. 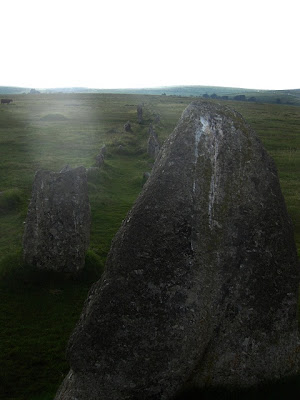 One last look back at the stone rows.  I'm not one for orbs and all, but given the lack of dust in the air, I am left wondering what this strange misty sphere is nestling in the top of one stone ...


Posted by Deborah Harvey Poetry at 14:17