Graves, Bogs and a Load of Old Bull 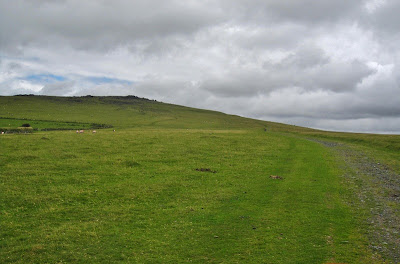 For some reason I've been drawn to the western flank of Dartmoor lately and have given in to the urge even though it means a fair drive from the biscuit tin by the sea. This latest walk took me, Son the Younger and Ted out to the delightfully named Cocks Hill and back via Cudlipptown Down.

Above is the start of our route, a track leading from the idyllic village of Peter Tavy to Langstone Moor, and below the view in the opposite direction, looking out over West Devon.  The eagle-eyed might just be able to spot Brent Tor, topped by its church, on the far left. 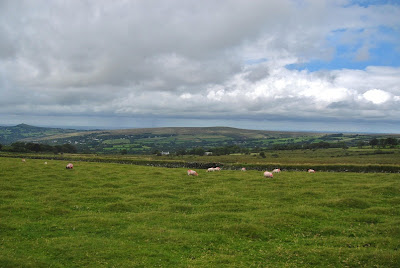 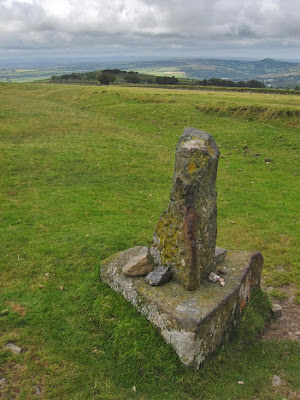 This track leads to several landmarks.  First up, at some remove from human habitation, is this monument marking Stephens' Grave.  Having been jilted by his sweetheart, George (or possibly John) Stephens poisoned himself, and this being some 250 years ago, was buried outside of the village at the meeting of the ways so that his restless spirit wouldn't find its way back to haunt those who had done him wrong.  Strangely, this story, which is so vague and fragmentary, insists on one detail.  At the very time he was being lowered into his grave, some linen that was hanging out to bleach at Higher Godsworthy blew up into the sky and disappeared.

Like the more famous Kitty Jay, wanderers bring gifts for George - usually coins, stones, wild flowers, little crosses of rowan wood tied with red thread, etc.  This time I had a white pebble and a story for him. 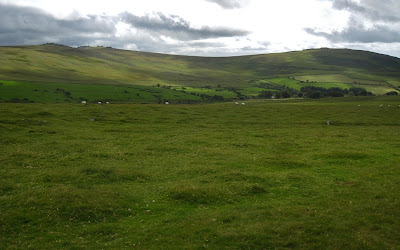 Already, heart-stopping views were opening up to the south in the form of Roos and Great Staple Tor, where we'd walked a few days earlier, now spattered with sunlight and cloud, and up ahead louring Great Mis Tor.  It was sublime. 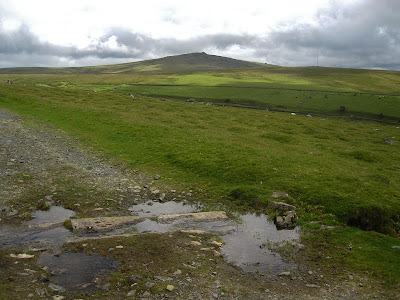 Unfortunately a ubiquity of sheep meant that Ted had to stay on the lead again. 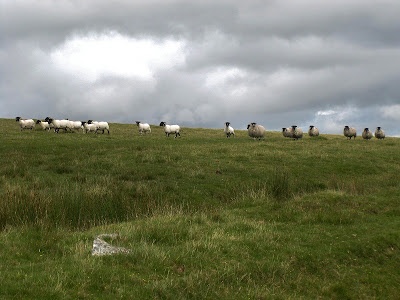 Son the Younger asked me why some were sheared and not others, and I had no idea.  They appeared to be from the same flock, although like walked with like. 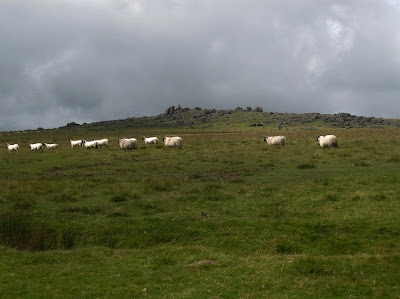 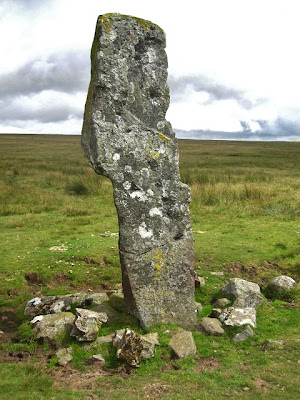 Passing White Tor to the north, we headed for the eponymous Langstone, a menhir situated at the end of a now almost invisible stone row, and not far from the stone circle where we'd rested on our previous walk.  There were three soldiers lounging there who wanted to know what the stone was for.  Well, wouldn't we all?  Though US forces found a use for it during the war, as testified by bullet holes. 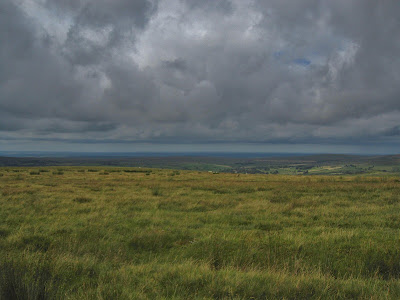 We were now striking pretty deep into this part of the moor, with the Walkham valley to our right and Tavy Cleave, which we'd explored at the beginning of June, coming into view to our left.  There is something about this sort of bleak landscape that fills me with joy, even as my companions stride out further and further ahead ... 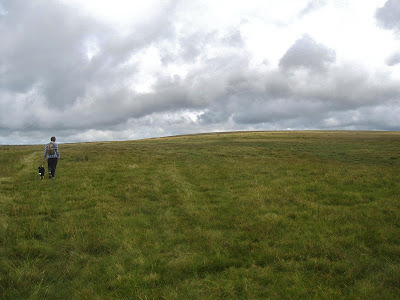 ... that is, until a Highland bull decided that we were way too close to his harem.  I suggested to Will and Ted that we might want to detour a little, so we did - quite hastily - and eventually our outraged friend lumbered off to shout to another group of walkers. 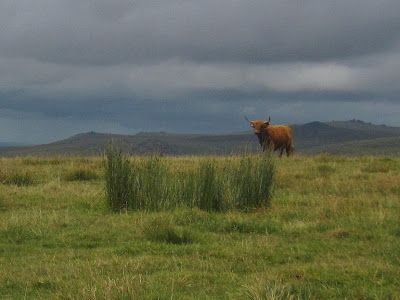 This is the view over to Standon Down, with distinctive Great Links Tor in the distance.  As you can see, the going was quite soft in places. 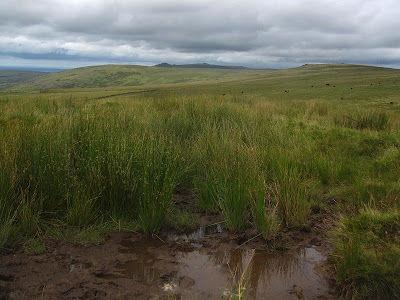 It was now time for a rest, and handily we'd reached White Barrow on the slopes of Cocks Hill, one of the boundary points of the Perambulation of 1240. 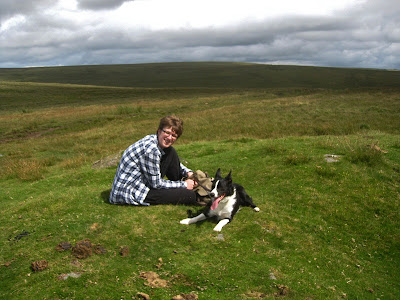 Up ahead we could see the Lych Way leading to Beardown Tors and the unmistakeable cone of Longaford.  This is the route along which mediaeval tenants would carry the coffins of their dead, from the settlements in the middle of the moor to the Church of St Petroc at Lydford.  It is famously described as being 12 miles in fair weather and 18 in foul. 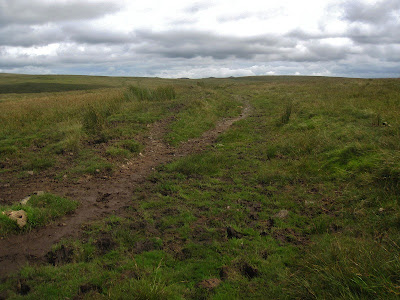 We just had ourselves to carry; even so, our route was testing.  The first thing we had to do after our rest and recuperation was to find a way across a nearby stream, which wouldn't have been at all difficult were it not for the boggy land around it.  Son the Younger tipped a boulder into this stretch and it disappeared without trace. 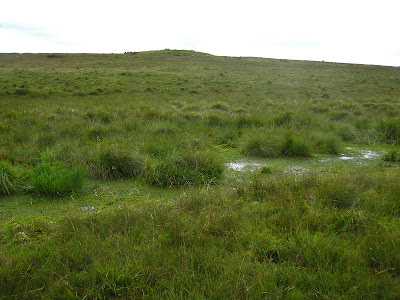 Fortunately, we managed to find a dry crossing point without having to walk too far out of our way, and headed north-west towards Bagga Tor. 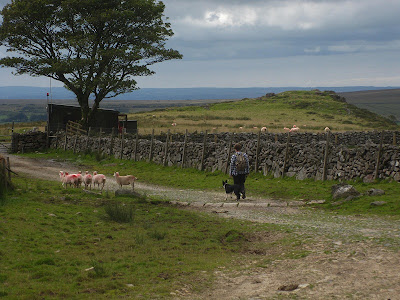 Here we exited the moor and walked down the lane to the hamlet of Wapsworthy, which seemed to consist mostly of ruins from various eras.  Another little rest and we rejoined the moor for a stiff climb over Cudlipptown Down, with the compensation of wonderful views north to Tavy Cleave and beyond ... 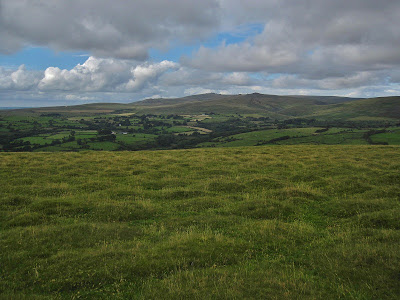 ... and, once we had struggled to the top, back over to Brent Tor and Gibbet Hill. 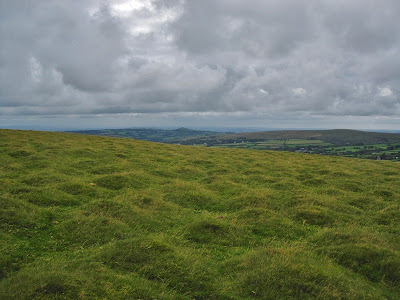 If you're still with me and wondering why someone's taken the trouble to quilt vast tracks of moorland, well, apparently it's down to weathering affecting the fine silty loam of this area during the Ice Age.  Whatever, it makes for pretty tricky going, particularly when you're beginning to tire.  (Looks good, though.) 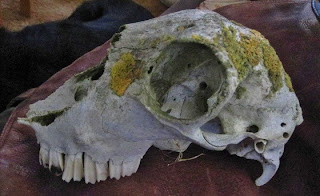 And so we were almost back to the car.  Just time to collect another skull for our collection, this one a long-dead and belichened sheep.  Then it was back to the biscuit tin, with me ignoring the quick but dull route of the A30 in favour of the more picturesque road across the moor.  Which can, at times, be very slow indeed ... 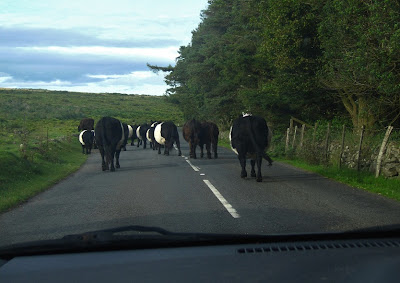 Posted by Deborah Harvey Poetry at 14:25