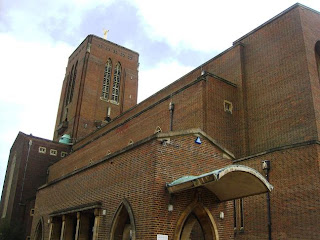 Continuing my tour of Guildford with Jan and Dónall, we made a final stop at Guildford Cathedral Church of the Holy Spirit, which occupies a commanding position atop Stag Hill.  It's a modern edifice consecrated in the year of my birth, 1961, and indeed, there was something about it which made me think of my childhood, even though I'd never been there before.  After a while, I realised it reminded me of a red brick building at the British Aircraft Corporation in my home town of Filton - I believe it was the canteen - which I'd encountered during those ill-fated attempts by my father to kindle an interest in aircraft by taking me along to air shows.  I would gaze at it in despair, wishing I could go inside and read, away from the sun and the grit and the tedium and, above all, the unbearably loud sound of the Harrier Jump Jet as it hovered interminably nearby. 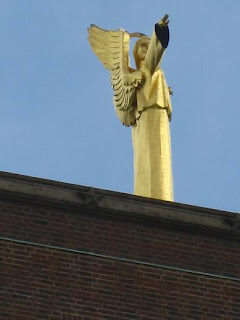 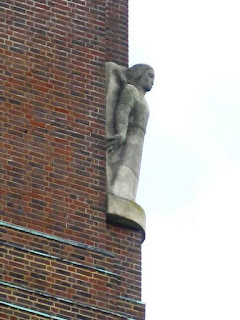 
Not a promising start, then. And compared with our ancient cathedrals, Guildford came across as ordinary - more a large church than anything else.  But one with a very beautiful line in angels. These unearthly creatures were designed and engraved by John Hutton. 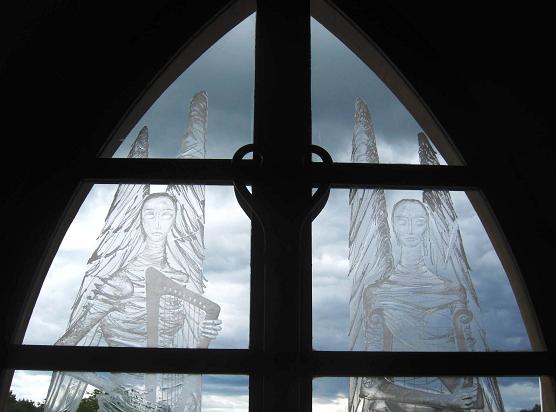 The interior was rather more impressive, particularly the vaulted ceilings in the side aisles, the perpendiculars of which seemed to soar.  The photo with Jan in it should give some idea of scale. 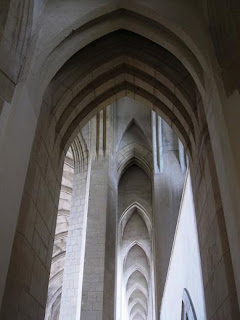 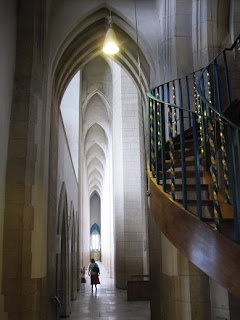 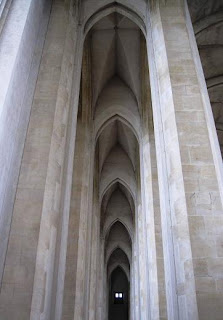 All accentuated by the plainness and lack of fuss, which, in modern buildings at least, I love. If there are few stories to be had, let's at least have simple magnificence.


There were a couple of aspects I was less taken with, one of which was the art for sale down each side of the nave. Not that it lacked merit, it was just that its presence made the place feel like more of a gallery than a holy place, and I don't much care for that.


I cheered up when I found these nice angels in a side chapel. 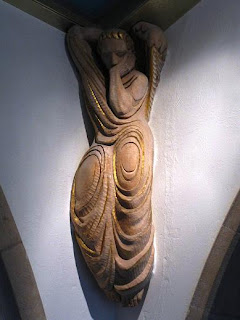 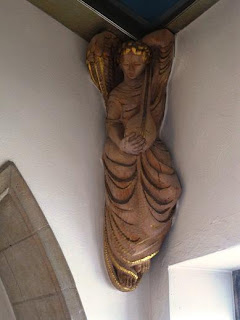 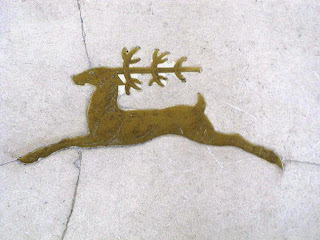 I also liked the brass stag, let into the floor at the spot marking the centre of the Cathedral on the highest point of the hill, but I couldn't help missing the accumulations of the centuries that you get in older buildings.  There's poetry in the detail.

Then it was time to bid farewell to Jan and Dónall, who had ensured that I'd had such a memorable day at lamentably short notice, and retrieve Son the Elder for the drive home.  Many thanks to my hosts; I hope to return the favour in Bristol soonest!


Posted by Deborah Harvey Poetry at 22:02