A Visit to Wells Festival of Literature 2010

So, Saturday it was off to the beautiful Somerset city of Wells, at the invitation of the Festival of Literature Committee, for a prize-giving, luncheon in the Bishop’s Palace, and a talk on writing by the novelist Sarah Duncan. With me my writing teacher and friend, Kate Dunn, whom I was delighted to invite by way of a thank you for her support.

As luck would have it, morning dawned fair and our journey passed uneventfully. Having arrived with time to spare, we took a wander around the town. The trees have some way to go before their autumn colouration gains its full intensity, but they were still very beautiful, and given the lovely, slightly misty quality to the light, I was vexed that I’d carefully stowed my camera in the wrong handbag.

After we'd perambulated the moat, we made our way to the main entrance of the Palace and on to the light, high-ceilinged room where the prizes for the Short Story and Poetry Competition were to be given. I was expecting to feel nervous, but didn’t, partly because an actor was reading out the winning poems rather than the poets themselves, but also because it’s the poem that’s being honoured on these occasions, not the person who was fortunate enough to find it and pin it on the page. Still, it was a pleasure to accept the first prize cheque for £500 on behalf of said poem, ‘Coleridge Changes His Library Books’, along with a certificate and a charming terracotta tile depicting the Cathedral fashioned from books.

Lunch was handsome – roast pork and vegetables, followed by syrup pudding with clotted cream – and the company serendipitous. Kate and I sat with the poet who won second prize in the competition, the generous and indefatigable Sue Boyle who runs the Bath Poetry Café, her husband Jim, the actor Dennis Harkness, who won the Silver Wyvern prize for his short story and who tours with a one-man show about Coleridge (how’s that for synchronicity?), and his wife, the very talented artist Juliet Harkness. We were also joined by one of the committee members, who told us there had been 479 entries in the poetry competition this year.

After lunch we attended the talk about writing, and Sue kindly invited me to read at the November Poetry Café. Then, we left the Palace and made our way to the Cathedral, but not before we’d located the bell the swans ring when they want to be fed! Unfortunately part of the south aisle, the transept and everything to the east was closed to visitors as there was a choir practice in full flow, but even so, it was wonderful to drift along the stone avenues, dislocated from time. And that's another reason to go back soon. 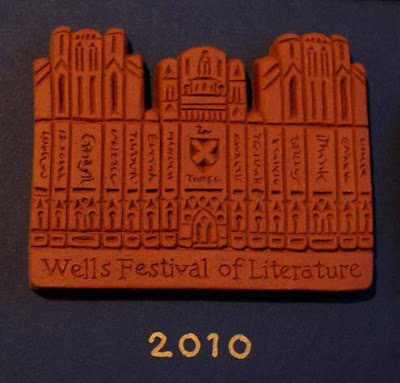 Posted by Deborah Harvey Poetry at 22:56