I nearly lost my dog the day before yesterday. Not escaping from the park lost, or running away to sea, but lost in the sense of dead. One minute he was his normal, bouncy, demanding self; the next – well, within ten minutes, anyhow – he was frothing at the mouth, losing fluid from his rear, and lying under a bush in the garden, whimpering. Another ten minutes and he was flat out on the floor of our local vets, being worked on by three of the team while an anaesthetised rabbit languished, abandoned on the operating slab.


Three years ago I nearly lost my daughter. She was two weeks into her university career and two hundred-odd miles from home when she went to bed one night and slipped into a diabetic coma. By chance, she’d arranged to go out with a friend from Bristol the following evening and when she failed to meet him or answer her mobile phone, he had the presence of mind to go to her halls of residence and get one of the members of staff to break into her room. As horrible as it was to see my boy sprawled on the tiles on Friday, so suddenly and shockingly close to death, it didn’t compare with seeing one’s offspring stuck full of needles and tubes in intensive care. Nevertheless, it's not something I'm anxious to repeat in a hurry. 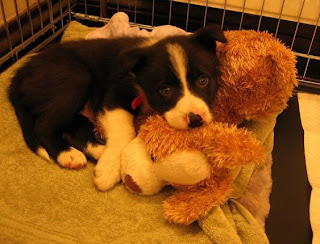 Ted is the first dog I’ve had. Until the day I picked him up from the farm at nine weeks, the most onerous pets I’d cared for were rabbits and cats. As a result, I’d never quite understood the bond between owner and dog – in fact, when childless women gushed that their Yorkie or their dachshund was their baby, I’d inwardly roll my eyes. But sitting in the back of my neighbour’s car with a tiny, frightened Ted next to me in a plastic crate, I felt a bonding as fierce as any I’d experienced with my newborns. And as fond as I’d been of the parade of rabbits over the years - Jimmy, Ziggy Stardust, Spike, Drusilla, Bramble and Plum – and our acquired felines, Eric and Polly, now long departed, this was a far more powerful attachment.

Ted pulled through. At midnight I had a call from the all-night vets on the other side of town, where I’d driven him at 6pm because our local practice was closing for the night. Could I please come and pick Ted up, as he was whining and howling and refusing to settle. I duly relieved them of their charge, leaving them scratching their collective heads as to how a dog so full of morphine could be so intractable.

Ted is pretty much back to his normal self today, apart from shaved patches on his chest and legs from blood tests and two intravenous drips because he pulled the first one out. We’re taking it easy, however, until the results of his tests come back. The consensus at the moment is that he either had an attack of acute pancreatitis or a severe allergic reaction to something he ate. The vets do not believe he was poisoned, and for this I am profoundly grateful as he’d been given treats by both my fruit and veg man and the postman just before he fell ill. Having drifted through the first 48 years of my life on a tide of rose-pink ignorance and wishful thinking, all the reading I've done recently on the subject of psychopathy had me thinking the worst, especially as the postman had taken a photo of Ted with his mobile phone after he’d given him his treat. Nevertheless, from now on I shall keep a tub of gravy bones by the front door and any callers who want to can give him one of those.

I love my dog. He’s handsome and faithful and he enjoys walking with me in the country. He doesn’t mind if I write a poem instead of doing the ironing. Above all, he loves me back. I’m so grateful  he’s curled at my feet as I post this. 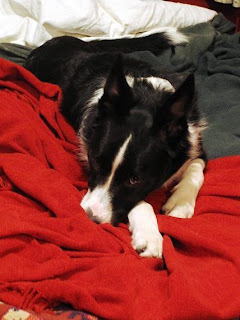 Posted by Deborah Harvey Poetry at 12:29