New Year on the Severn: Brean and Beachley

We decided to walk a little further afield on New Year's Day, as it was New Year's Day and seemed to need observing slightly differently from all the other days during this pandemic. Our chosen destination was Poets Walk at Clevedon, as we hadn't been there since just before our old collie, Ted, died, 16 months ago. Unfortunately when we arrived, there was nowhere to park as everyone else in the locality seemed to have had the same idea. I'm quite sure they can't all have been poets. 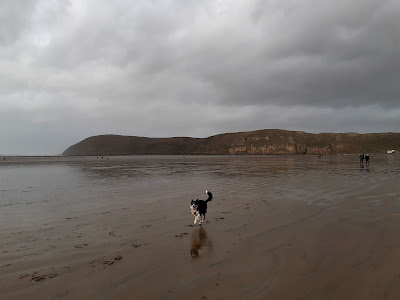 Anyway, we headed on down the M5 and ended up in Brean, where we had a wander on the beach. Cwtch didn't seem that disappointed.

I decided to climb the steps that lead up the side of Brean Down to take in the view and see how the New Year might pan out. It was quite a haul. 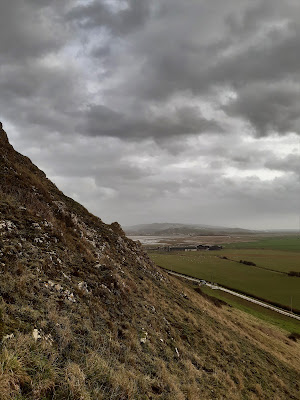 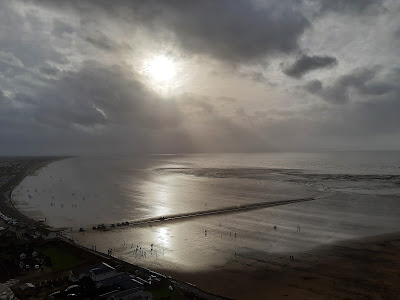 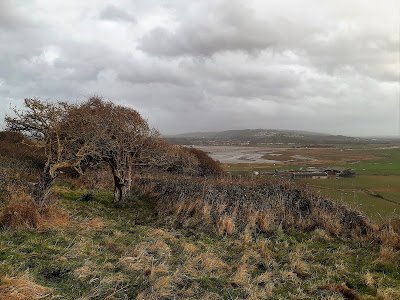 On the way up I stopped to watch a raven, which was being mobbed by three crows. And the view at the top - here looking over to Uphill - was worth the effort. 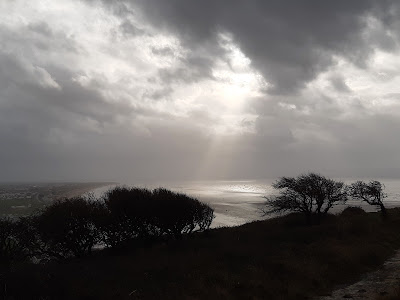 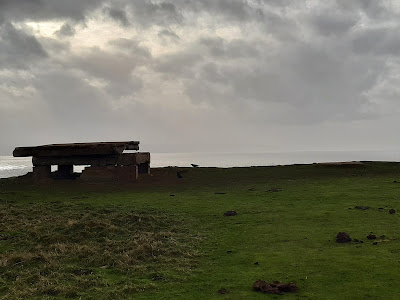 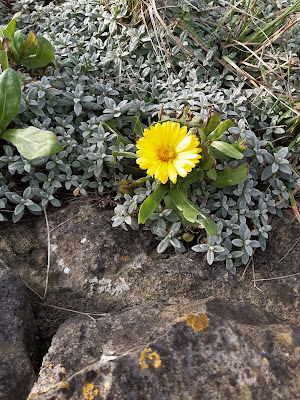 Back at sea level, I spotted an unseasonal pot marigold, which, like the raven, cheered me. They - the marigolds - always remind me of my grandmother's garden. 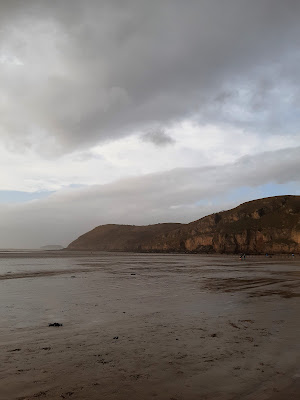 My walk with Cwtch and Son the Younger today started directly under the old Severn Bridge at Beachley. 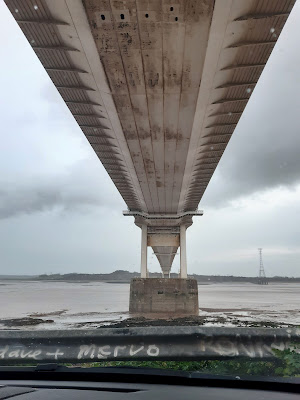 The last time I was there, three years ago, we started to walk around the promontory that separates the Severn from the Wye, but the tide was high and the afternoon short, so this time, we started straight away, without fossicking on the shore for fossils first. 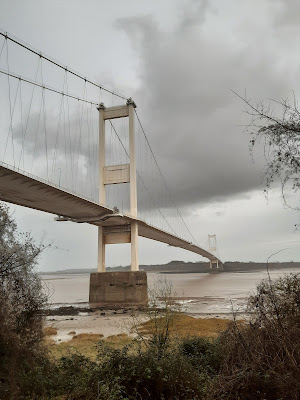 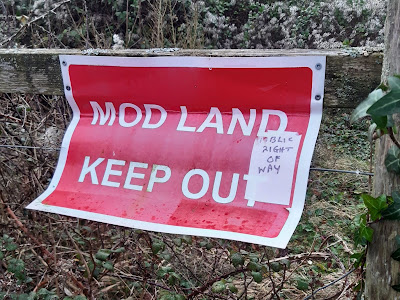 We decided to heed the small papery sign written in felt pen, rather than the big red one. 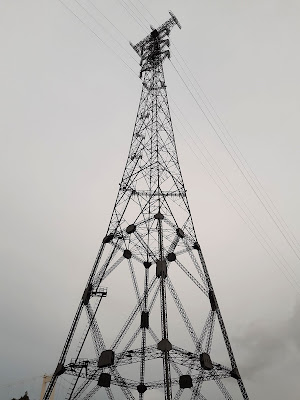 I couldn't make it out, but there was definitely a raven up in the western pylon of the Aust Severn Powerline Crossing. 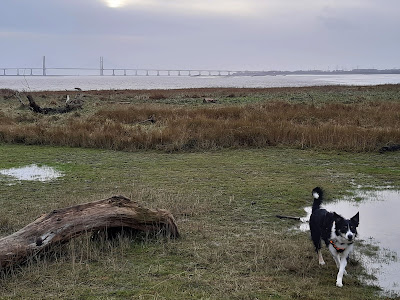 Once again we were thwarted in our plans, though, as the path around the promontory was flooded at a point where ubiquitous brambles made it the only route round to the River Wye. 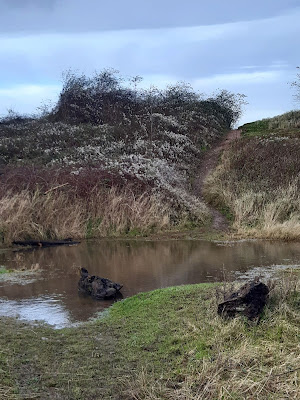 We turned back, vowing to return in a drier season. 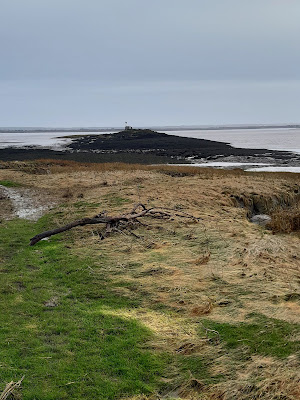 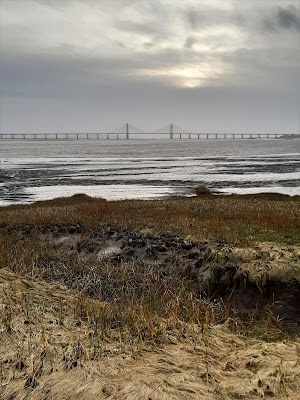 View to the new Severn Bridge 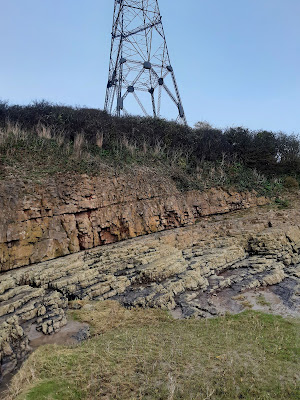 We decided to return to the car along the beach, passing some interesting geology. 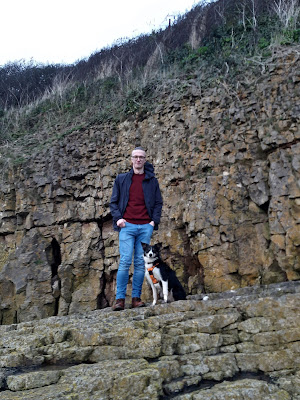 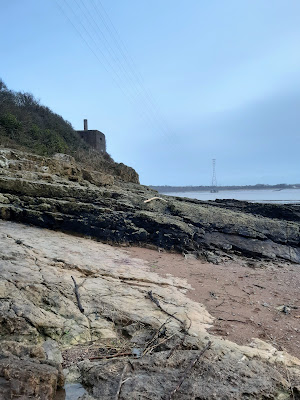 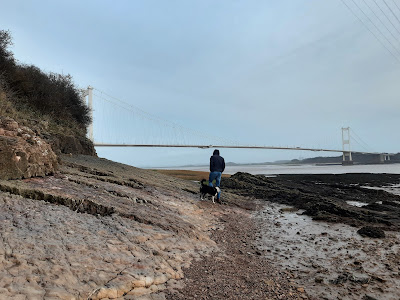 This involved scrambling over rather slippery rocks. Unfortunately my walking boots didn't have very good grip - nor I proprioception - and I fell over a couple of times. (It was quite funny, though.) 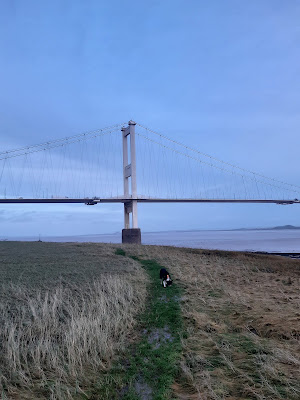 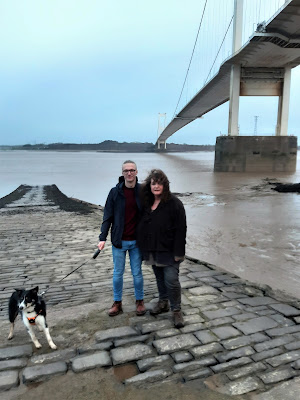 Back at the bridge, a passer-by offered to take photo of the three of us together. A rare capture of the photographer.
Happy New Year.
Posted by Deborah Harvey Poetry at 21:16