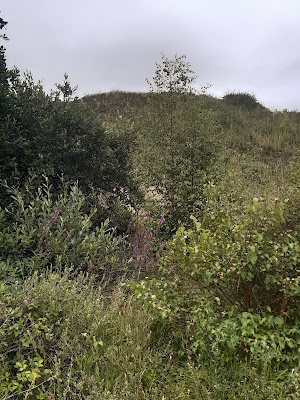 After my recent visit with Son the Younger to Rest Bay and Sker Point, my friend Liz Kerr remarked that she didn't know the South Wales coast that well, as previous visits across the bridge have generally involved visiting family in the Valleys, and so we arranged a second visit to the same spot, only starting at the Kenfig Nature Reserve, which has toilets and a van selling cups of tea, as befits our age and status. 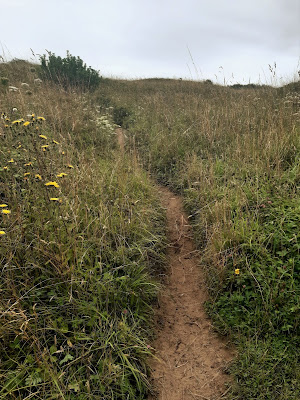 The appointed day dawned warm, cloudy but dry and it would have been a beautiful drive across the Vale of Glamorgan, but unfortunately we were talking too hard to notice it. Walking somewhere new is different, though - we had signposts to follow, leading us through the dunes to the coast.
One of the first things I noticed was that there were far fewer flowers and insects than on my previous visit three weeks earlier, which is to be expected, of course. There were still some beauties, though. 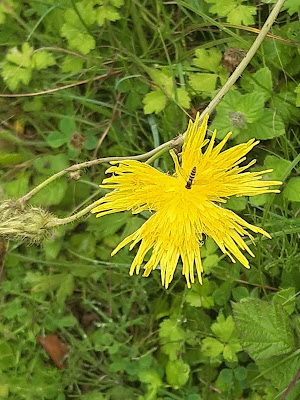 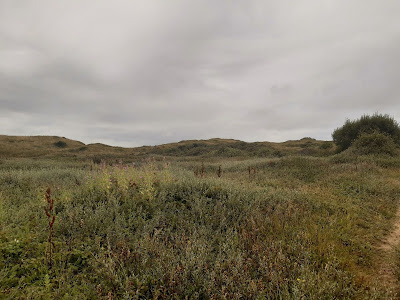 Sorrel and yellow rattle pods, with clumps of great (or hairy) willowherb 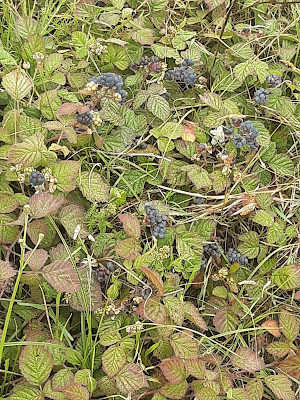 Dewberries with the waxy bloom that gives them their name 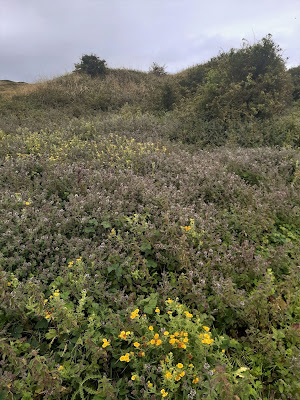 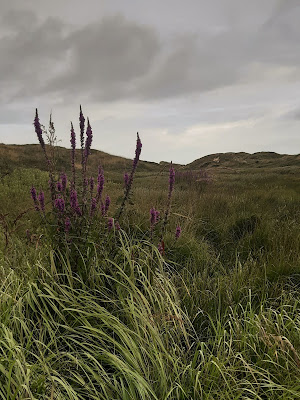 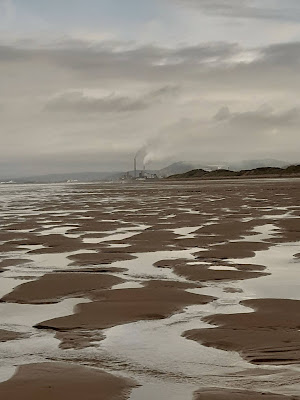 After about a mile we reached Sker beach, where the chimneys of Port Talbot were belching. Our path then took us north along the coast for a short distance ... 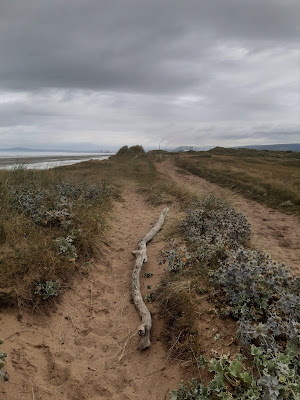 ... before heading back inland. We took the opportunity to climb one of the higher dunes to get a better view of the burrows and surrounding landscape. 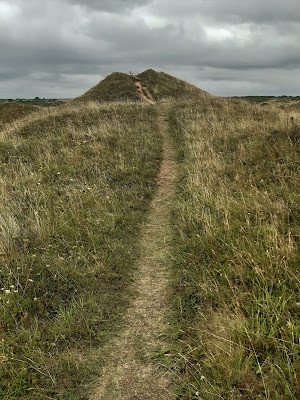 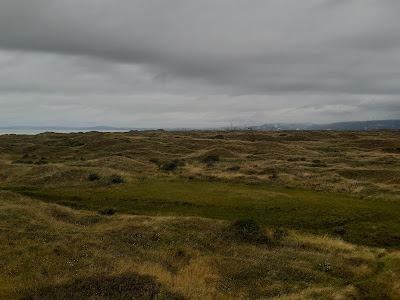 Looking towards Port Talbot and Swansea 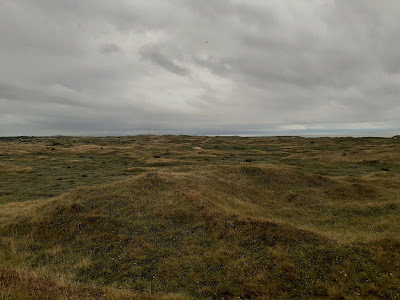 Hazy Somerset and Devon in the distance 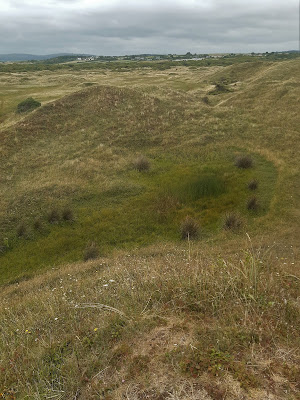 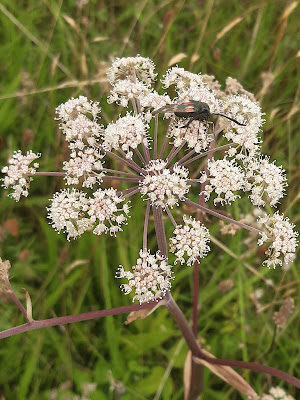 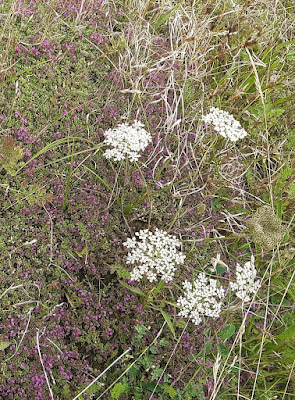 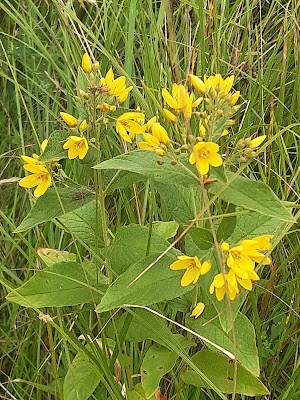 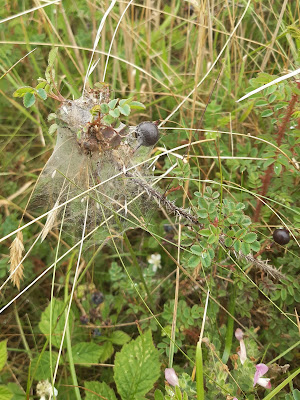 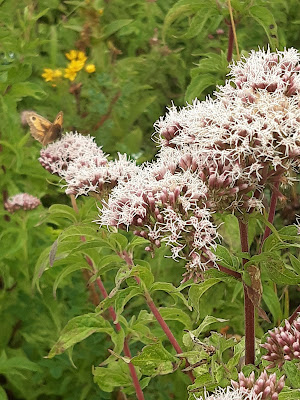 Meadow brown on hemp agrimony
On the approach to Kenfig Pool we encountered patches of damp woodland and reeds that were noticeably cool and a little eerie. 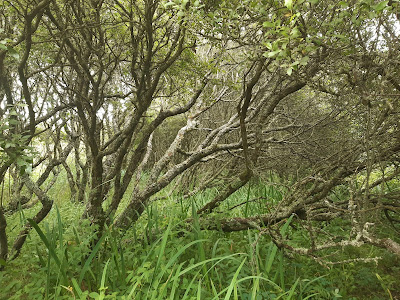 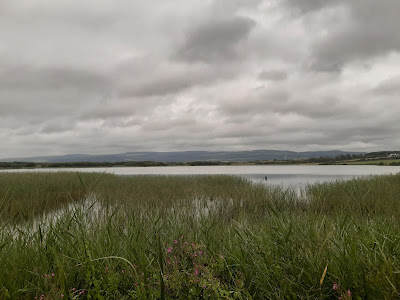 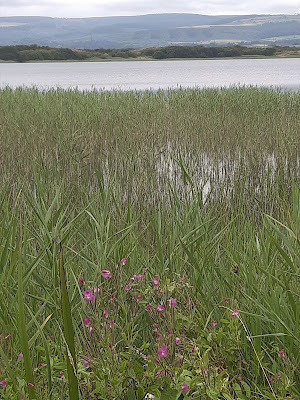 Kenfig Pool from the south hide
Back at the centre, we decided that rather than head straight for home, we'd visit Kenfig Castle, the topmost part of which is all that remains of the walled town of Kenfig, which was completely overwhelmed by sand in the 15th and 16th centuries. Google told us it was a mile's drive away in North Cornelly, so we set off. On the way we saw a stubby-looking fortified church - St Mary Magdalene, Kenfig - and decided to visit but the door was locked. There was a great view of Port Talbot from the churchyard, though. 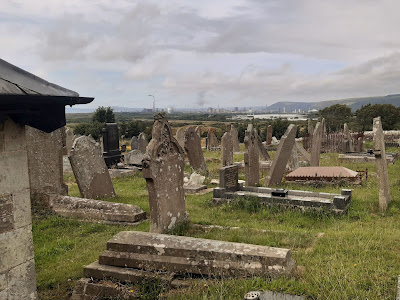 The Sat Nav then proceeded to take us down a long, terrifyingly narrow lane (thankfully there were no other drivers foolish enough to drive down it in the opposite direction), and we eventually ended up in the middle of an industrial estate. Google Maps was insisting this was where Kenfig Castle was, but no one in the reception of the nearest industrial unit had ever heard of it. We eventually decided we probably should have walked to it from the Nature reserve, which meant we'd have to return another day, and drove home laughing. Getting into silly scrapes for the last fifty-six years. That's us. 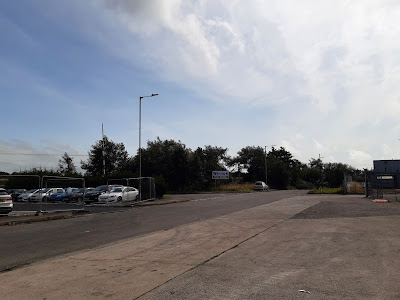 Posted by Deborah Harvey Poetry at 21:53