True to form, it being the school holidays, I've driven 400 miles in the last two days. Most of these were in my capacity as Chauffeur to the Star, ie Son the Elder who is back doing some extra work for the first time since the pandemic started. (Can't reveal what the production is or who the big-name star is, obviously, except that even I've heard of him.)

The other sixty miles were with Son the Younger, who needed to get his car repaired in Newport, and who wanted to go on a jaunt to Porthcawl, rather than sit in Dunelm on Spytty Road for a whole day, waiting for it to be fixed, and since both jobs were in South Wales, it was easy to multitask.

The last time we were in Porthcawl, we'd walked along Merthyr Mawr beach to where the River Ogmore meets the sea, and we'd had my lovely old collie Ted with us, who'd had a great time running in and out of the waves even though it was February. We didn't bring our current collie, Cwtch, this time, even though she hails from nearby Neath, on account of it being 32 degrees in my car and far too hot. We decided to walk in the opposite direction too, in the hope that it would be less crowded than the beaches nearer town, so parked at Rest Bay and headed north-west along the coast towards Port Talbot. 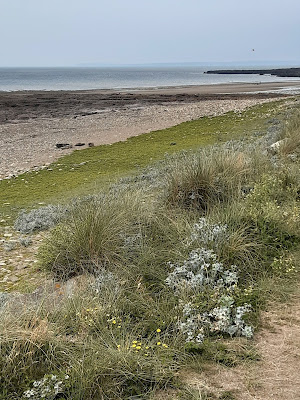 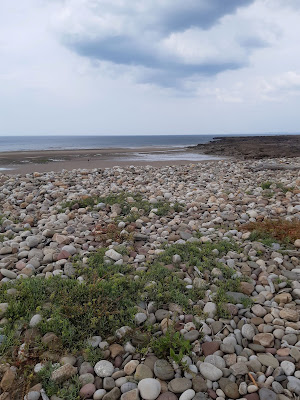 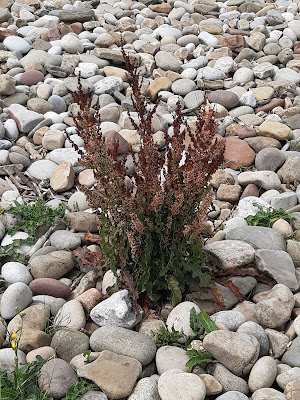 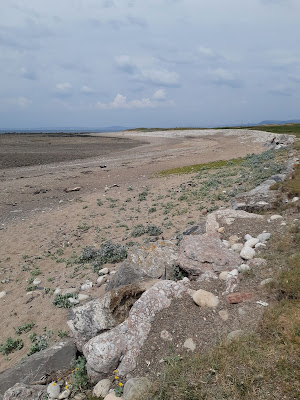 Pink Bay
The further we walked, the fewer people we encountered. It felt wild and bleak and lovely. 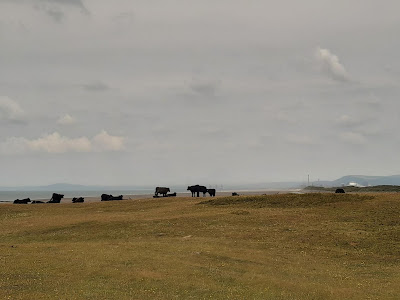 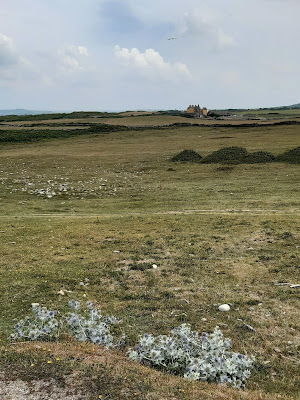 This is Sker House, the history of which goes back nearly a thousand years to when it was a grange belonging to nearby Margam Abbey, and which has attracted stories of persecuted Roman Catholic priests, and wreckers luring ships to their doom on the rocks of Sker Point. 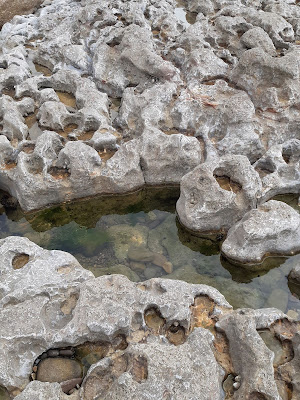 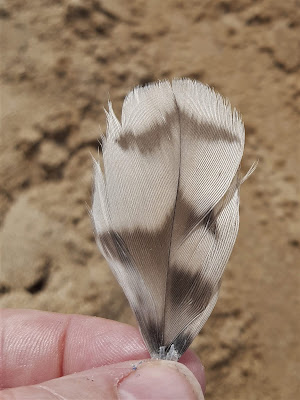 No idea whose feather this is 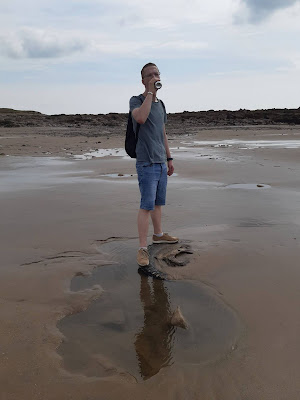 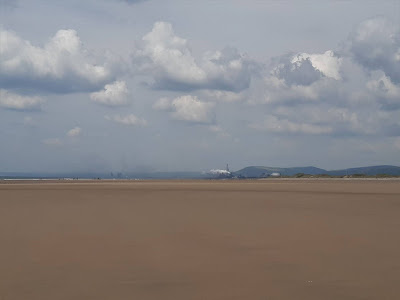 We walked some way along Sker beach and then decided that given the heat, we'd probably gone far enough. A little further ahead there were some naturists, and it was certainly hot enough and remote enough for the sighting not to be a surprise. As we sat and sweated, the skies cleared and the sun came out, burning away some of the mist that had shrouded the views of Port Talbot, Swansea and the Gower. There was a bit of a breeze, just enough to make the heat bearable. 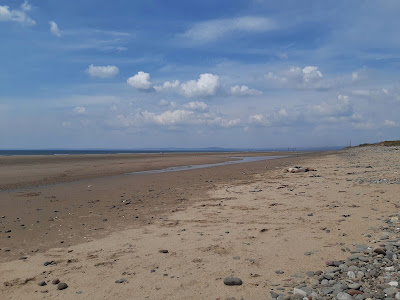 On our way back, we walked along the edge of the dunes, which were thick with vegetation and wildlife. 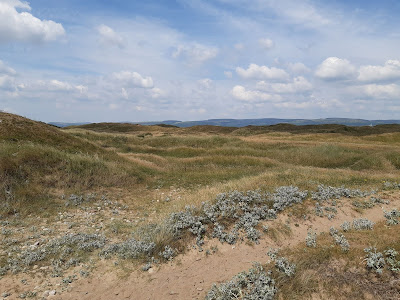 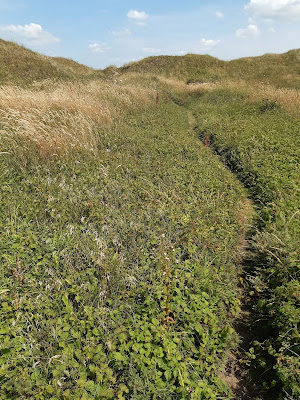 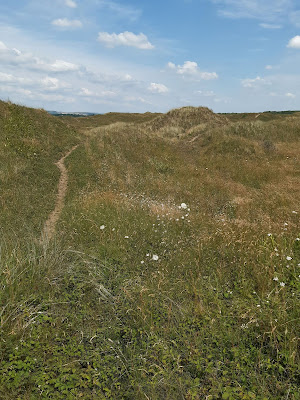 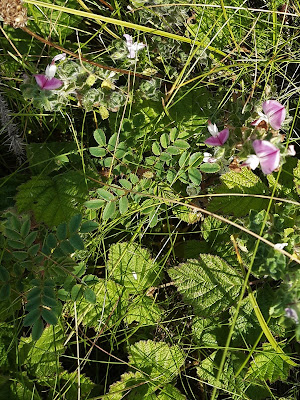 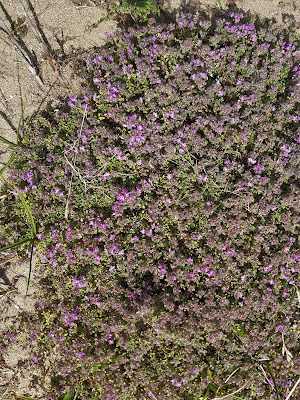 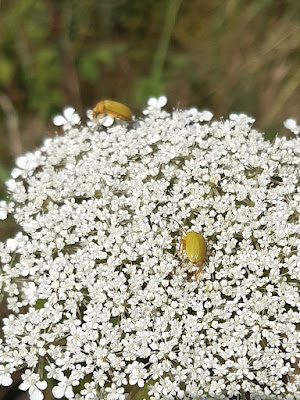 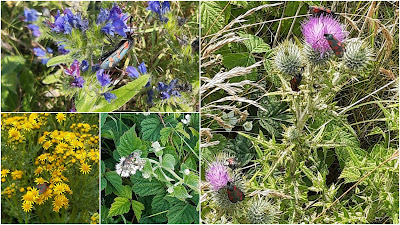 There were multitudes of six-spot burnet moths, who, when they take off, become a blur of red wings - seen here on viper's-bugloss, spear thistle, wild mint and ragwort. Their wings had been bleached by the sun and the wind ... 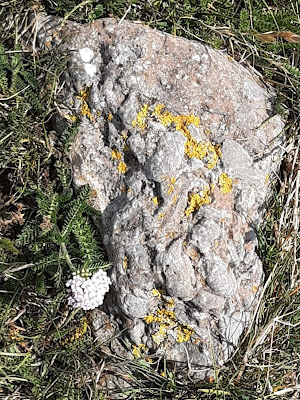 ... the same conditions, I imagine, that has stunted the growth of this yarrow.
There are also some extraordinarily round pebbles. 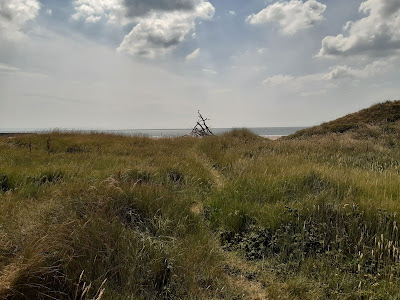 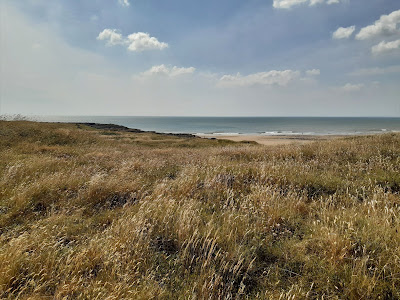 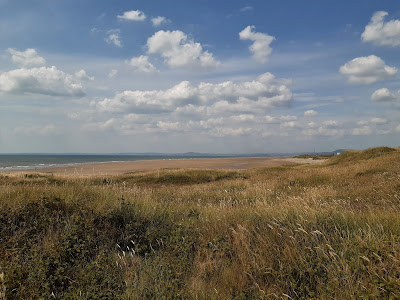 Views from Sker Point
By now we were tired and thirsty and glad to see Rest Bay on the horizon, although when we finally reached it, a brief glance in passing was all we had time for. Son the Younger needed to get back to the garage, and after I'd dropped him off, I had to dash back to Bristol for a few hours' respite before my midnight return to Wales to chauffeur home Son the Extra. Which is scant rest indeed. 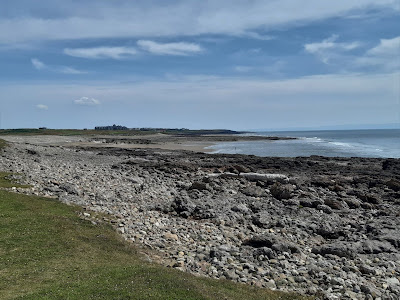 Posted by Deborah Harvey Poetry at 15:07