The Northerner's been poorly all week, poor Cwtch is on heat, and the Met Office says we're heading for the wettest May on record. All of which means it's been nearly a week since we've been up the field and down the wood and over the common, and I miss it, along with our neighbourhood swifts, of which I've seen not one yet this year.

So as I sit here listening to yet another storm outside, with a snoozing, oozing pup at my side, I'm going to cheer myself up just a bit by  looking at some photos when we have been able to get out. 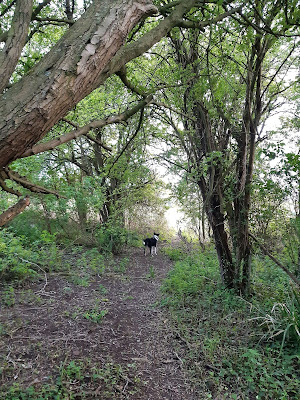 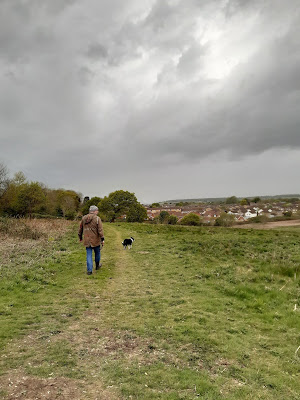 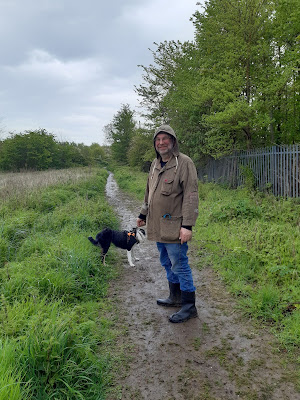 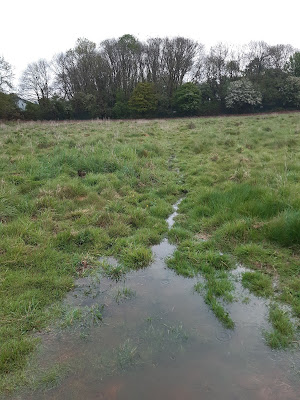 ... and yes, I know we need the water for the harvest/garden/allotment, but I was enjoying sitting on dry, cracked earth to watch the sun go down.
Not that there's been much of that, either, as even when we've had comparatively blue skies, the weather systems coming up the Bristol Channel have dumped the worst of the cloud over Wales, as is their wont. And that is where the sun is setting for us right now. 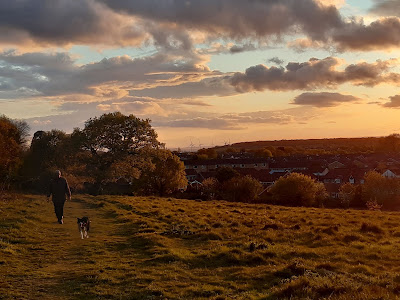 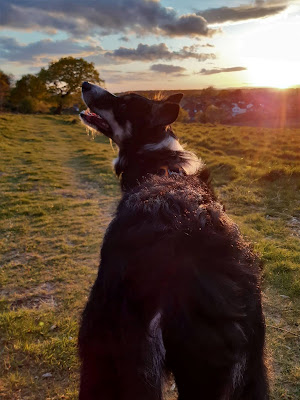 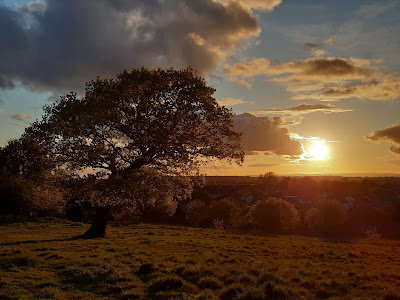 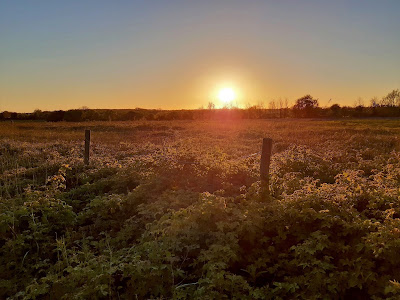 Charlton Common
So often we've just had to make do with ordinary skies, like this one. It's not too much of a hardship. 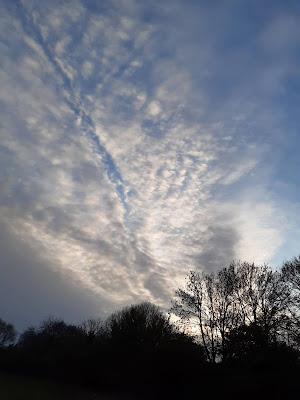 Of course, all the rain means things have been growing. 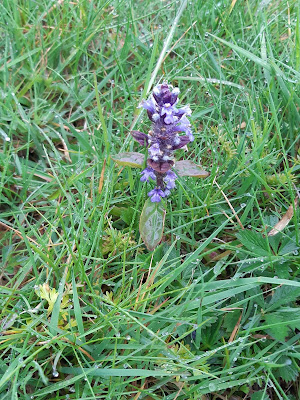 Some quite early selfheal 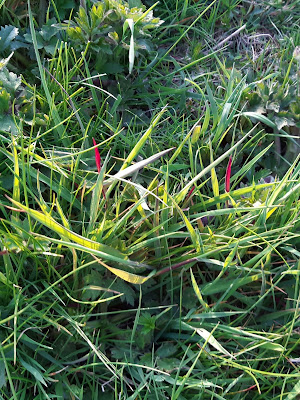 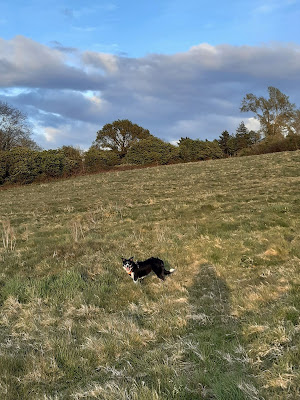 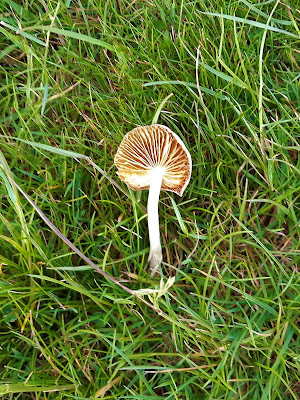 What I think is an elderly yellow fieldcap, identification made a bit easier by Cwtch having knocked it over
Of course, the best thing about this time of year is the whitethorn. It's been a bit later than usual this spring, but worth the wait. 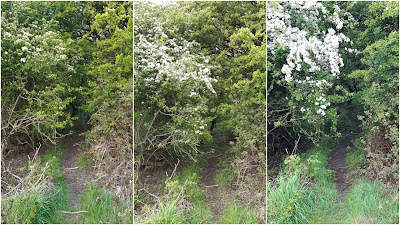 The entrance to Rooky Wood (just up from the rookery) on 1st, 9th and 13th May 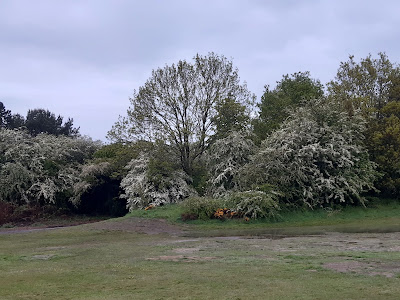 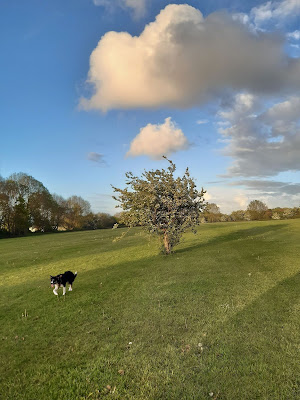 Cwtch and the witch of the fairway, grim Miss Havisham 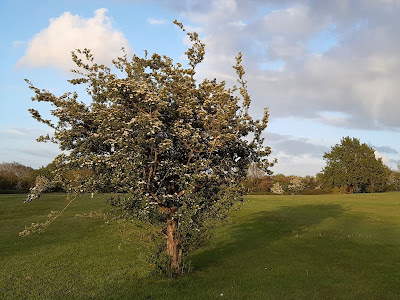 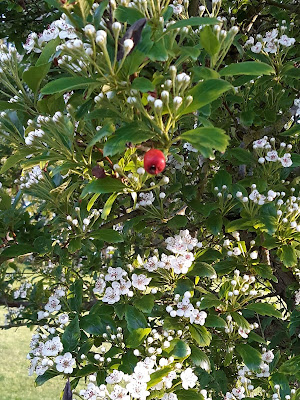 Just one of last year's haws left
One of the sad things over the winter was how the brambly scrub around the edge of the meadow was hacked to the ground, apparently with no care at all. A lot of the Small Dark Wood of the Mind was also hacked back. It's horrible to see the damaged trees and bushes, but there is a bit more light in there now, and consequently a little blossom. 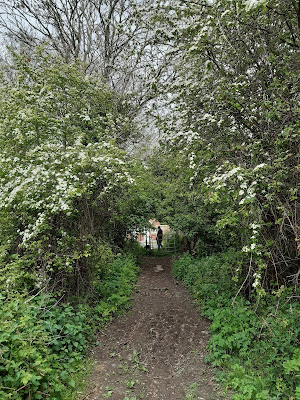 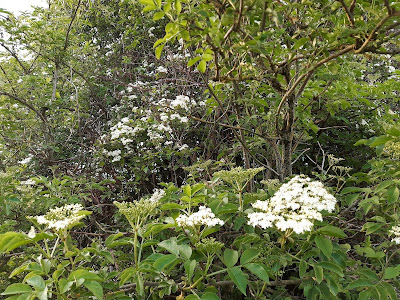 Finally, whitethorn and elder flowering together
Down at the rookery there's been the strange phenomenon of ghost birds. Having first occurred in May 2020, there's been three more instances this month. 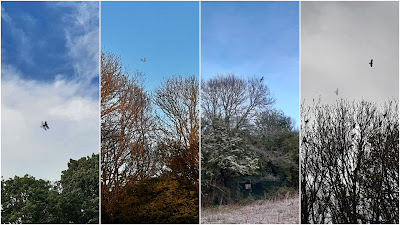 'Looks like your camera's clicking twice,' says Dru, and of course she's right, but it doesn't quite explain why the other birds in the fourth photo are single images ... 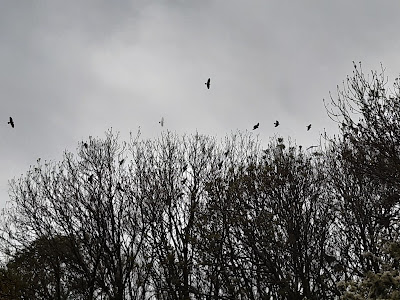 ... nor why it only happens when I photograph the rookery.
Finally, having waited over a year for our first glimpse of a roe deer, Cwtch and I saw another just a fortnight later, this time in the bounding down the side of the meadow and disappearing into the wooded area on the far side of the winterbourne. Cwtch was very good, and although she ran down for a closer look, I'm pleased to say that she didn't chase it, which Ted certainly would have done. It was fairly late and pretty dark ... 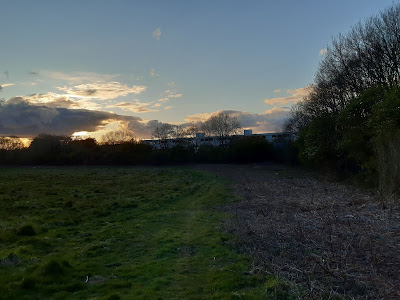 ... but I lightened the photo and you can just make it out to the right of the rightmost tree. 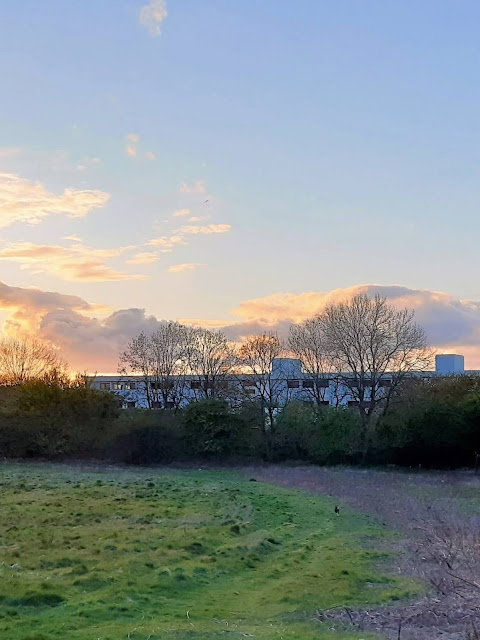 Posted by Deborah Harvey Poetry at 13:34