A Road Trip to Portishead 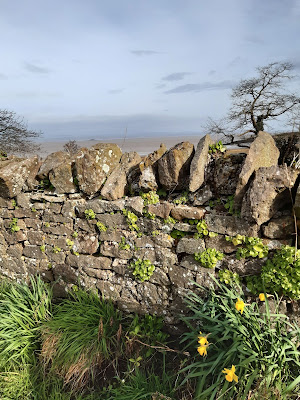 The Northerner's phone needed fixing and all the Apple shops are shut, but he came across someone who could repair it in Portishead, and suddenly we were going on a road trip and packed the dog, so we could have a walk along the coast path and she could have her first glimpse of what you might laughingly call 'the sea'.

These days you have to take what you can get. 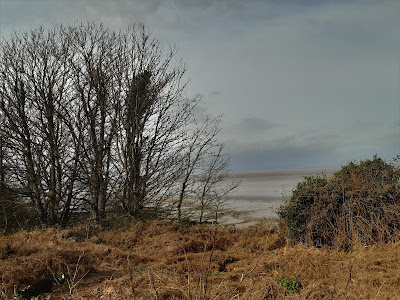 But it was a mild and dry day, the light was lovely, and the path we walked very sheltered, judging by the size and shape of the trees that line it. 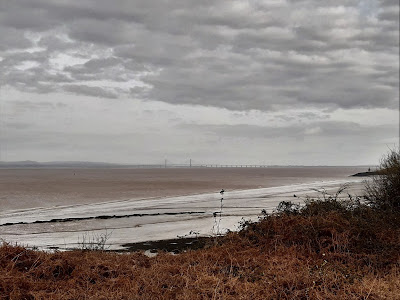 Upstream, the new Severn bridge was visible, and just beyond I could make out the pylons of the Aust Severn powerline crossing, but the beautiful older bridge was invisible in mist. 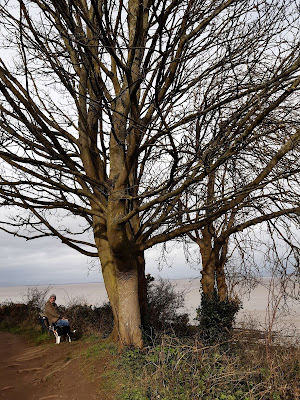 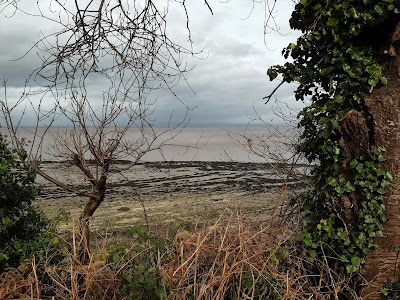 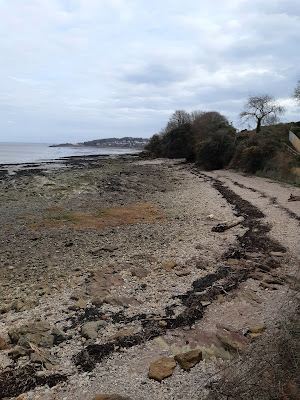 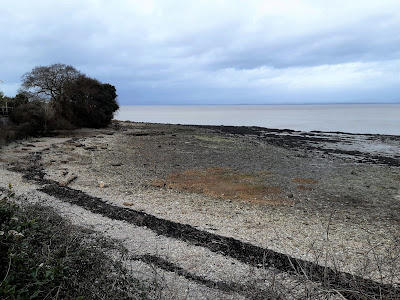 I haven't been able to find out the name of this cove we passed, so maybe it's regarded as the far end of Sugar Loaf beach. Anyhow, I really liked it, with its neat tideline of bladderwrack. 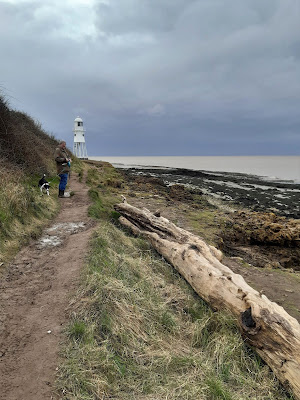 Shortly afterwards we reached our destination, Black Nore lighthouse, which was built in 1894 and decommissioned in 2010. 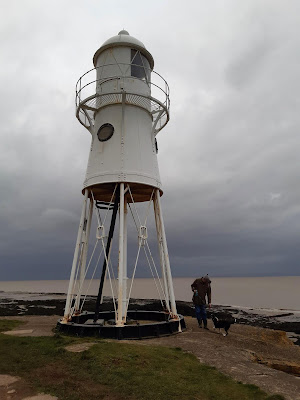 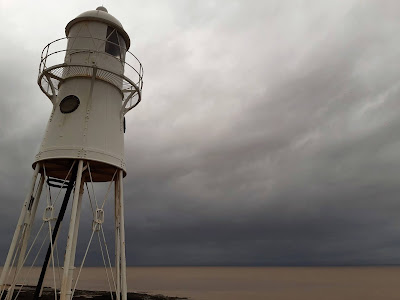 By now storm clouds were sweeping up the Channel, and although it was darker on the Welsh side, we decided nevertheless that we should probably head back to the car. 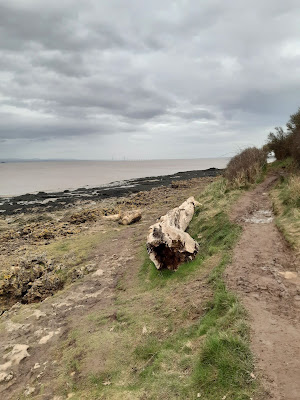 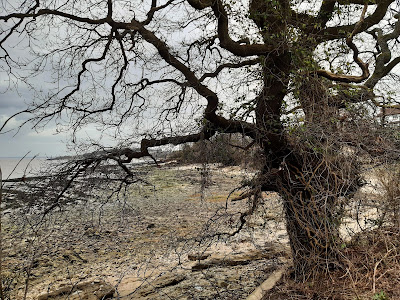 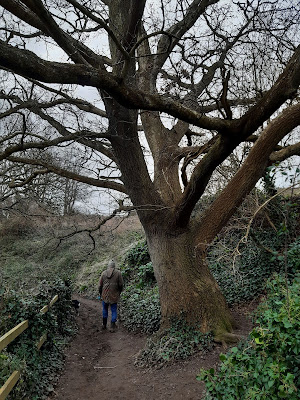 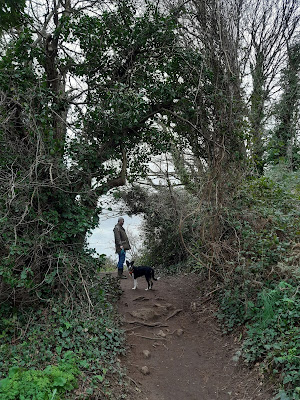 We did pause for a bit at Sugar Loaf Beach proper to wander down the slipway and show Cwtch 'the sea', but to be honest, she didn't much care for the mud. 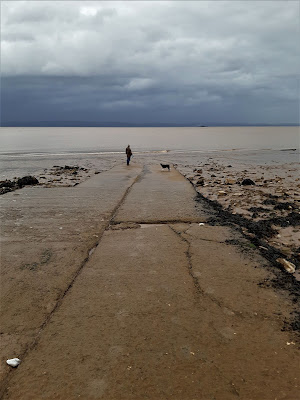 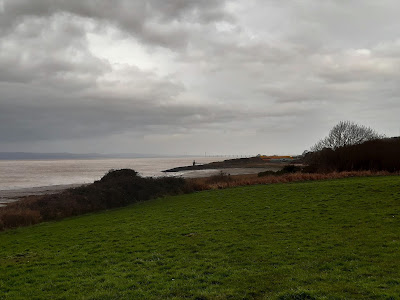 A brief postscript this morning, in the shape of a return visit to retrieve the phone, now in full working order, and the chance of a wander up to Battery Point. Cwtch enjoyed exploring the warth in weather that wouldn't have disgraced late April. 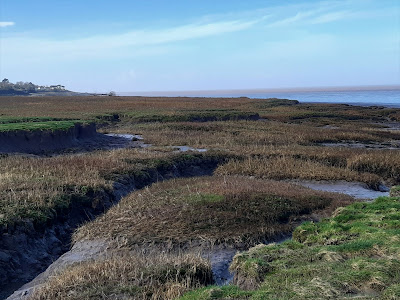 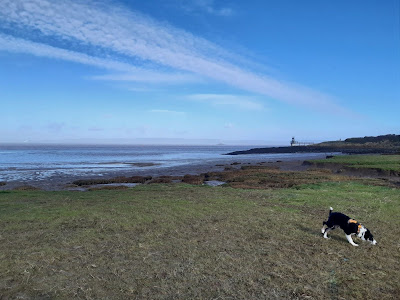 Battery Point lighthouse is still in use, although its two-tonne fog bell was removed in 1998 for fear it might cause the structure to collapse. 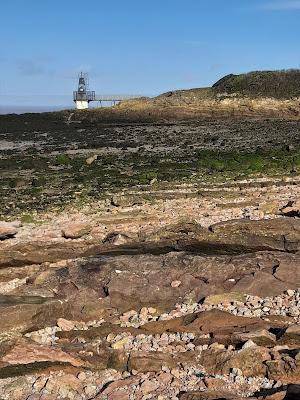 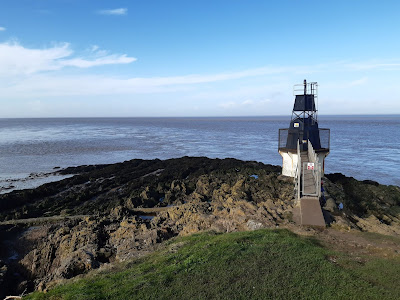 The Severn bridges were even harder to make out than yesterday ... 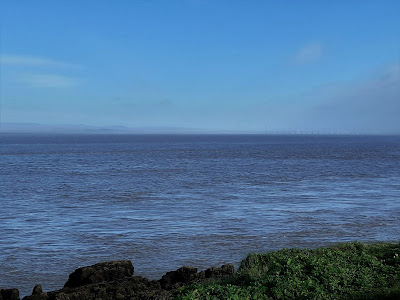 ... though it was interesting to glimpse Avonmouth from a different angle ... 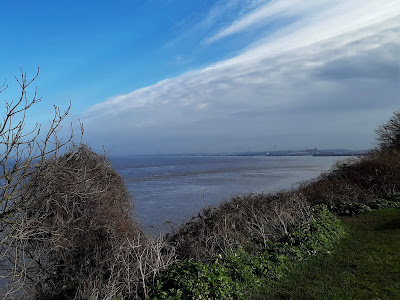 ... and Denny Island, midway between England and Wales and marking the boundary between the two, looked positively Mediterranean. Roll on spring and summer. 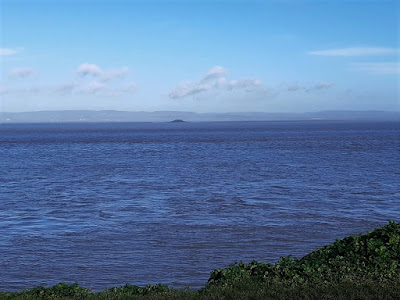 Posted by Deborah Harvey Poetry at 14:47