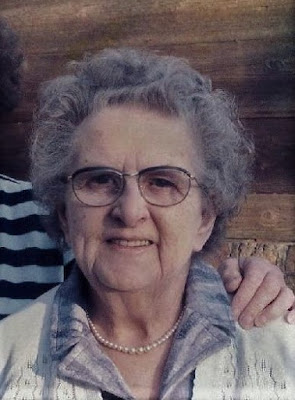 My grandmother, Hilda Hill, died in St Peter's Hopsice, then in Knowle, South Bristol, on Monday 12th August 1991. The last time I saw her was the preceding evening, when she'd fallen into a sleep from which she wouldn't fully awaken again.


It was a beautiful sunny evening; the last day of the 1991 Bristol Balloon Fiesta, and from the window of her room, I could see hot air balloons rising from their launch site at Ashton Court and drifting towards the nearby Clifton Suspension Bridge. They were the perfect symbol for the soul's departure, and the end of a life so well lived.

Since then I've never been able to look at the balloons without thinking of her. The next summer, I remember sitting on Horfield Common at Golden Hill with my small children, watching them come up the Frome valley - all the different shapes and sizes of them. There were lots of little frogs in the grass, and it felt as if she was very close.

A couple of years ago, I wrote a poem conflating those two memories. It felt too small and too personal to be submitted anywhere, but since I've joined an online group for poets designed to get us over the monthly submissions hump, I've been scraping around for things to send out, and eventually 'Balloons' made its way into the world ... and came straight back with a shiny penny in its pocket. Second prize in the 2019 A Poem and a Pint Competition. So, what do I know, about poems or anything?

That last evening
as you were dying
I looked through the window of your room
saw hot-air balloons rise over the city
with a sound like humpbacked whales
breaching trees and houses
enormous, cumbrous,
impossibly light

and I watched from the common
as they drifted
dozens in heavy golden dusk
and tiny frogs jumped
from damp grass
as if trying to reach them. 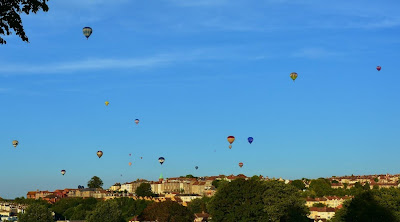 Posted by Deborah Harvey Poetry at 08:35