I’m so used to the idea, or first line, of a poem coming to me while I’m in the bath that I usually take a notebook and a biro into the bathroom with me. Maybe it’s to do with the neither-here-nor-there driftiness of wallowing in warm bubbles while staring at the ceiling, now graced by spotlights in the approximate shape of the Plough, a whim indulged when the house was rewired. What’s more unusual, for me at least, is an entire, somewhat water-blotched poem materialising, via divine dictation. On the few occasions this has happened, I’ve learnt to regard the apparently finished article with suspicion. It’s not a trustworthy creature.

The sensible option is to put such poems to one side and rework them later, but when it happened last October, I ignored my  own advice and spent my fairy gold before it could turn into dead leaves, packing it off to seek its fortune in the 2018 Plough Prize Short Poem Competition. I figured that when it came nowhere, I’d decide whether it was worth polishing up or fit only for compost. I was not a little stunned, then, to learn the poem I'd called 'Oystercatchers' had won first prize.


And consternated. For some reason unknown to me, the poem came with an epigraph, namely the famous first line from ‘L’étranger’ by Albert Camus: Aujourd'hui, maman est morte. Which is not quite as notorious as the second line, but even so, how would this play with my 90-year-old mother, should someone unhelpfully provide her with a translation? Possibly not well. 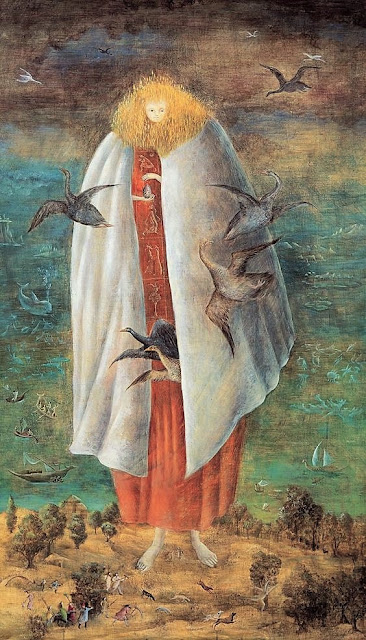 I decided to work out where the poem might have come from. I recalled that when it arrived, I'd just had a sequence of poems based on four paintings by Leonora Carrington accepted for publication. The Giantess, who is depicted arriving on an alien shore in an echo of Botticelli's scallop-born Venus, is definitely still hanging about in this poem, with the wayfaring geese flying from her opened cloak transmuted, for some reason, into eponymous oystercatchers; and spookily, she was referenced by the judge, Pascale Petit, in her thoughtful, intuitive report. 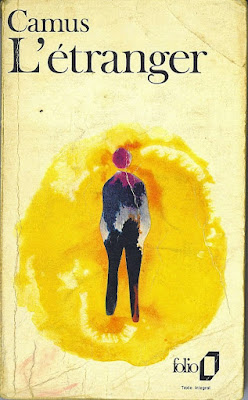 But what about Meursault, Camus' emotionally detached protagonist. How does he fit in?

Bath water. A warm sea. A glaring, African sun. It's been 40 years since I read 'L'étranger’. What, exactly, was the link between Meursault's mother's death and his subsequent, murderous behaviour? How true is his conviction that he was sentenced to death for not crying at his mother's funeral, rather than for murdering an Arab on the beach?

Is this 'betrayal' his real crime, as far as the society that sits in judgment of him is concerned?

I started thinking about when my grandmother died 28 years ago: the feeling that the ensuing generations had all shuffled one step forward towards death. I and my (many) cousins were no longer ‘the youngsters’. Some of us were already parents, myself included, and our children were taking our former place in the junior rankings. Meanwhile, our parents had unceremoniously become the old ones. And now, all these years later, they’re the ones who are dying, among them my father. I already have the sense of disembarking in a strange land.

Is it only when you’re parentless that you finally stop being a child and become your true self? I think so, even when family relationships are relentlessly uncomplicated, or contact with a parent is minimal. Perhaps my poem is suggesting this.

Whatever, when it does happen, I promise I won’t drive down to Severn Beach and shoot someone on the bleak and muddy foreshore.

One day
the day she’s been waiting for will come

and she’ll take these words with her to the sea
unzip her coat, pull open her ribcage

let them fly as purposely
as oystercatchers

pulling the strings of the sky
and tide

lifting the weight from each blood cell
giving her permission

'Oystercatchers' will be published in my forthcoming collection from Indigo Dreams, entitled 'The Shadow Factory'

Posted by Deborah Harvey Poetry at 19:15