'Armed with Madness': A sequence of poems after Leonora Carrington

It was my visit to Tate Liverpool in 2015 to see the comprehensive exhibition of art across several media by the celebrated surrealist Leonora Carrington that made me want to write a sequence of poems about her.

I set about reading a lot of her stories and autobiographical pieces, as well as the novel based on her life by Elena Poniatowska, and the more I learnt about her resilience and her drive to be true to herself, the more I saw in paintings I'd thought I already knew quite well. Eventually I wrote a sequence of four ekphrastic poems exploring aspects of her extraordinary life through four portraits she painted at key points:

Self-Portrait: Inn of the Dawn Horse (1937-38), painted at the time of her elopement to Paris with Max Ernst, when she left behind her family's suffocating expectations of her.

Bird Superior: Portrait of Max Ernst (1939), painted while the couple were living in the South of France, prior to Ernst's periods of internment at the hands of the French authorities, and then the invading Germans.

The Artist Travelling Incognito (1949), painted after her escape to Mexico, following a brutal stay in a mental hospital in Spain and her parents' attempt to force her back to England (by sending her nanny in a submarine to abduct her!)

The Giantess (The Guardian of the Egg) (c1947-50), which I construed as a mythical depiction of her arrival in Mexico, where she was to live out the rest of her long and fascinating life.

These poems have now been published in issue 18 of the fabulous journal of creative arts Riggwelter, and can be read here, but if you'd like to see the poems alongside the paintings, they're also below. (But do visit Riggwelter, because there's great stuff in it.)


‘Armed with madness for a long voyage’ *

After four paintings by Leonora Carrington 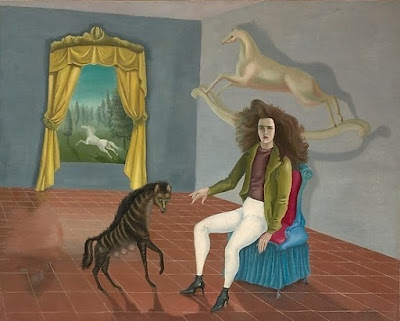 It’s lost its mane and tail
but she’s set that old rocking horse rocking
so hard it is lifting, hovering in the air

as if it might follow its living self
the one that has leapt through the frame
and is cantering into freedom.

And yes, it’s a dawning

Leonora, seated on a satin tongue
her demon hyena at her feet,
will soon be gone

as desire materialises beside her
casts a shadow, erases lines
that would confine her. 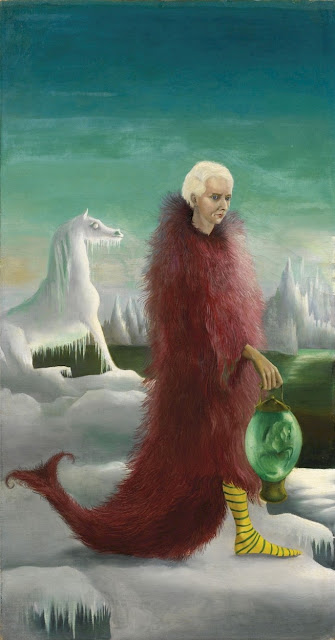 all flounced out in feathers and fish tail,
his stinging stripy socks,
Leonora’s shaman.

He paints her
tangled in briars and vines

she paints herself
frozen in the background
watching him walking out of shot
helpless to stop him.

Even before war is declared
she knows
he’s leaving

taking her light
trapped in his lantern,
the egg he will hide in the ice
of this barren lifeless mountain. 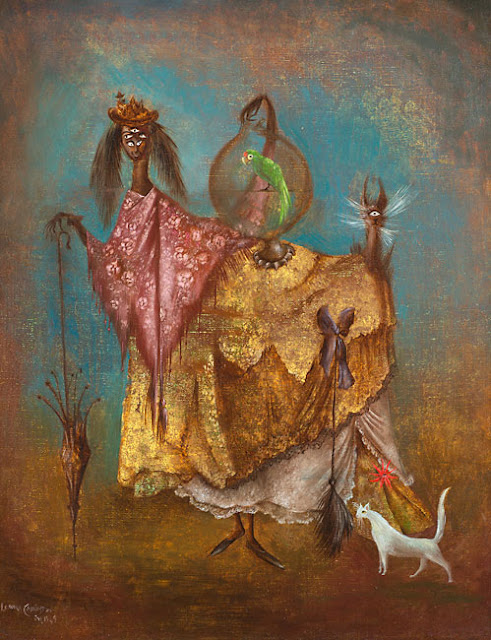 Why so paranoid?
asks the Spanish psychiatrist

She straightens the citadel on her head,
rearranges the extra eyes she’s borrowed
from her cat’s remaining lives

They’re coming to get me, she explains
In a submarine

Lord Candlestick with his strictures
Mother painting biscuit tins
punishing nuns, suitors, the spies of the Gestapo
entitled artists who would use me
as their muse

I’m sticking my necks out
my real head’s the decoy
it will parrot
what you expect   I’ve kept
my umbrella in case it rains
I don’t know why
I’m in disguise
none of them see me. 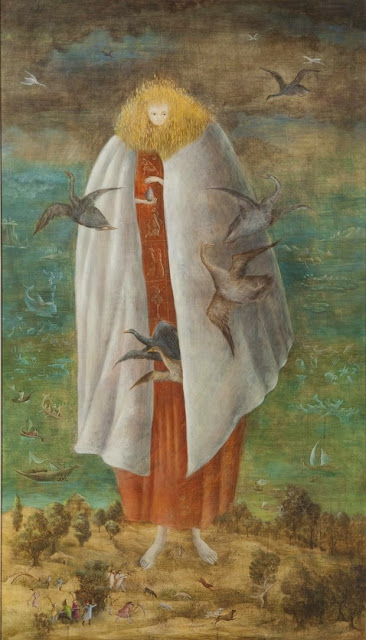 turned her back on the map of her journey
freed the geese that led her
to her unknown home.

She is brooding mysteries in her head,
her unhatched visions sprout strange
feathers in their egg.

* Paraphrased by Leonora Carrington from the inscription in Mary Butt’s novel, ‘Armed with Madness’

This sequence of poems will also be published in my poetry collection, The Shadow Factory, due to be published by Indigo Dreams later this year.
Posted by Deborah Harvey Poetry at 14:40