I went to see 'Walking the Chains'*, about the building of the Clifton Suspension Bridge in Bristol (before I broke my leg).  Here's a review I've written about it for the local rag. 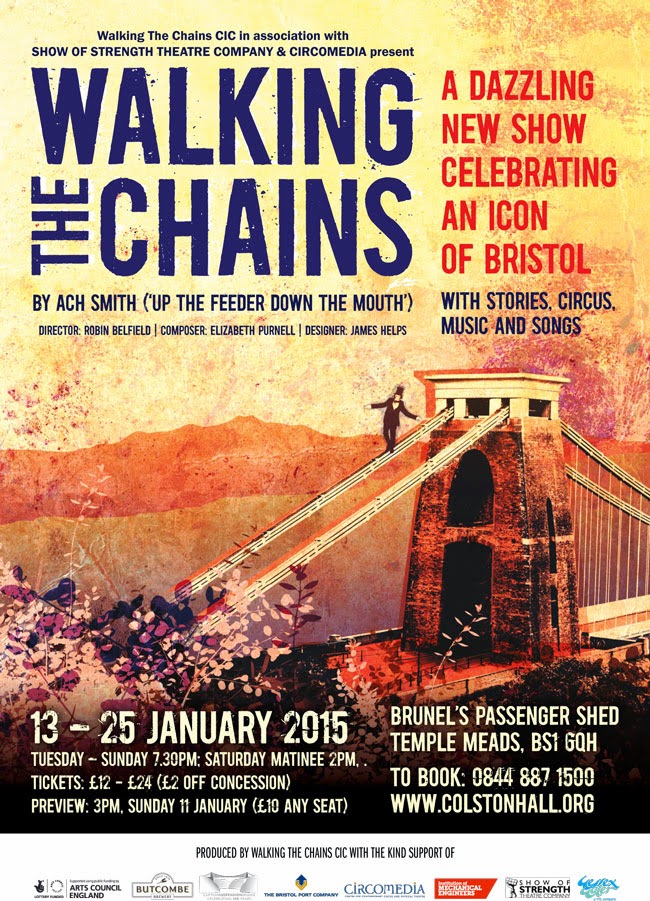 You’d be forgiven for thinking that the 150th anniversary celebrations of the opening of the Clifton Suspension Bridge had culminated with December’s firework extravaganza, but just over a month later, along comes this baggy and at times slightly exasperating celebration of our most famous landmark and the ‘little giant’ whose vision and drive brought it into being.

For the sentimentalist, the idea of staging ACH Smith’s play in the Passenger Shed at Temple Meads was inspired. More practically, the acoustics aren’t great and this meant it was occasionally difficult to hear what was going on.  Moreover, the way the action jumped back and forwards through time, with episodes such as the attempted suicide of Sarah Ann Henley (you know, the jilted Victorian woman whose voluminous skirts filled with air and parachuted her onto the muddy river bank) preceding the completion of the bridge, made me concerned that anyone unfamiliar with its lore and stories might be irredeemably confused.

But for all that, it’s a gutsy show, and with performers from theatre company Show of Strength, Circomedia and the Suspended Voices Choir – a cast which seemed to be of the clay of Bristol itself – you’d have to have a heart of Avon Gorge limestone not to be captivated by its exuberance.

Perusing the list of financial supporters in the programme, I spotted a shocking omission. Sometimes it seems that Bristol has again been split in two, this time by a council that parachutes in expertise from elsewhere to promote our city’s status as Green Capital while ignoring the local talent of its citizens, and blows thousands on the nonsense of fake grass and trees in Park Street, a stone’s throw from Brandon Hill.  (Hardly very green.)  Meanwhile, Show of Strength, along with b-Creative, Bristol Ensemble and Poetry Can, have lost all their modest council funding. It took Brunel, an incomer, to bridge the great divide 150 years ago.  Now we have another, and maybe it’s time our Mayor reconsidered how best to support the arts, and the interests of those Bristolians who practise them.

*'Walking the Chains' refers to the practice of 'interviewing' prospective maintenance workers on the bridge by making them walk its great supporting chains (without a safety-harness) to see if they had a head for heights. All other skills could be learnt.
Posted by Deborah Harvey Poetry at 17:57