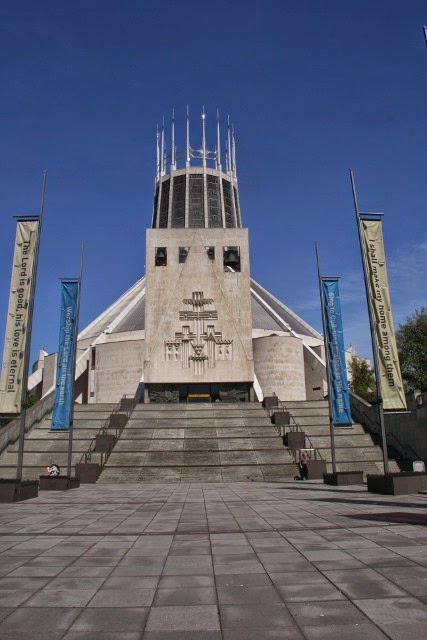 Like Bristol, Liverpool is awash with waterlight and I was looking forward to getting down to the Mersey.  First, though, there were cathedrals to visit - and no shortage of wondrous light in the Catholic version. 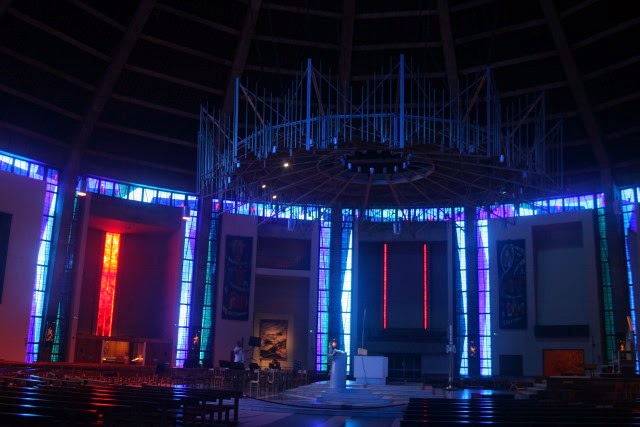 There is little point struggling for words when you have a camera. 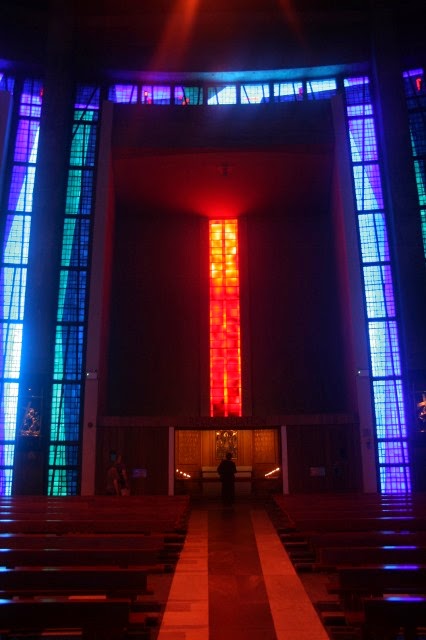 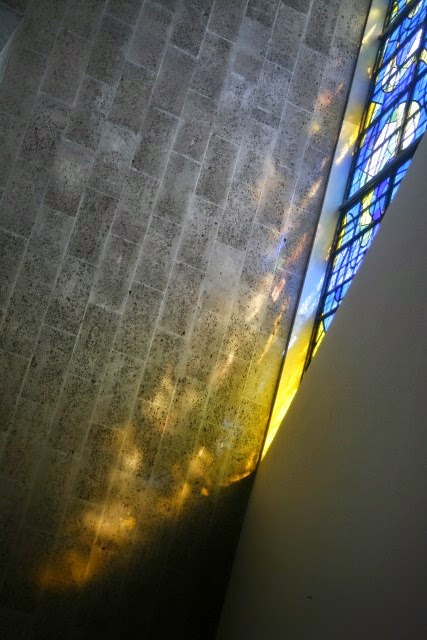 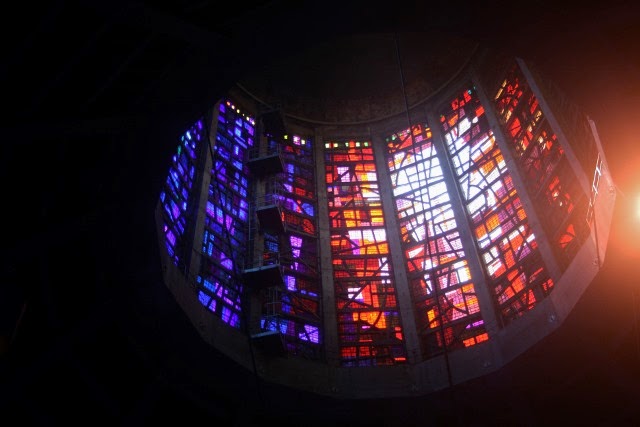 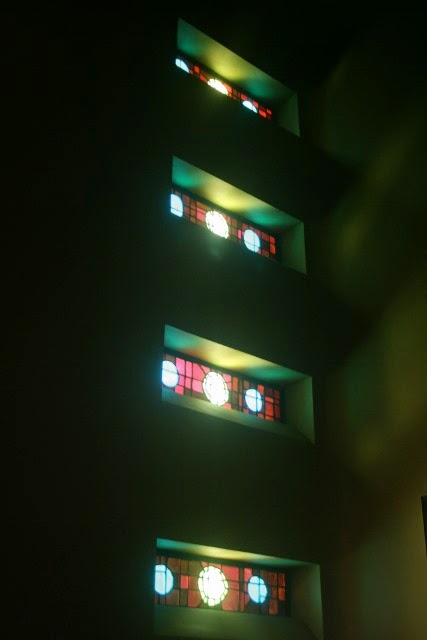 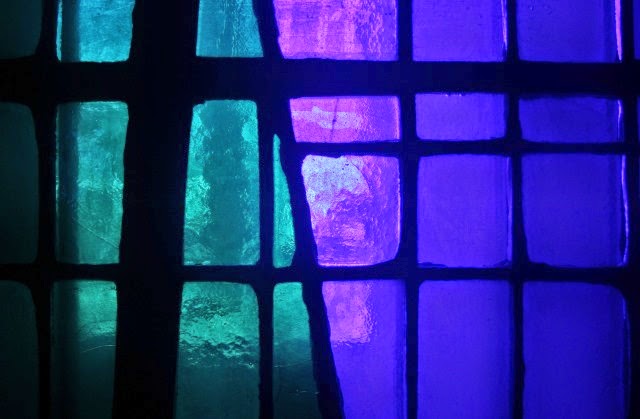 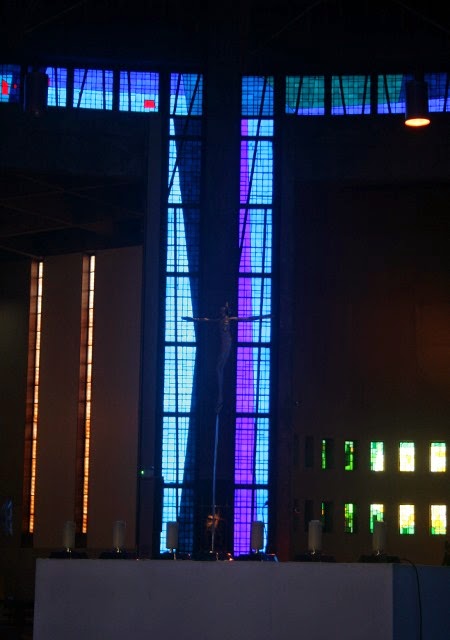 One of my favourite architects is Edwin Lutyens, so I was disappointed to learn that the crypt he designed was closed because students were taking exams down there. I hope the beautiful surroundings were an inspiration to those poor souls sweating over their papers on such a glorious day.  And of course it does mean that I shall have to return one day, so there's a stained glass lining to this cloud.

After a drink at the Philharmonic pub with its dark wood, copper panels, tiles, mosaics and Guinness, we headed for the Anglican Cathedral.  I didn't dare hope for anything as spectacular as the Catholic equivalent, but I was wrong - it  was just as stunning although very very different.

As soon as I saw the outside I knew that I would love it.  Designed by Giles Gilbert Scott, son of George, the great Gothic Revivalist architect,  it simply soars.  (Ice cream van for scale.) 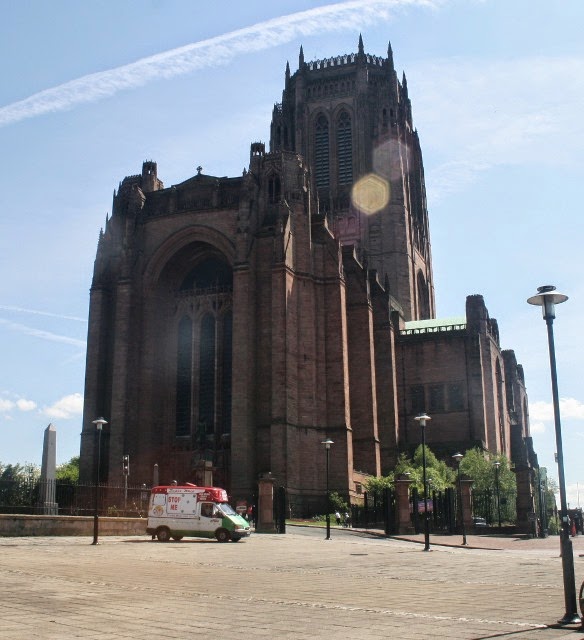 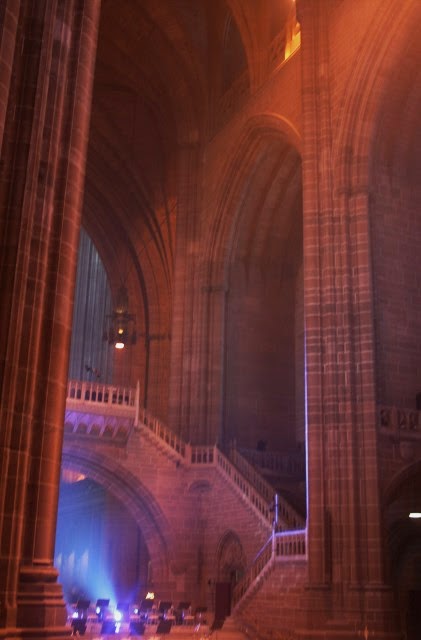 Inside it's like being in a Burne Jones painting. I expected to see maidens descending staircases at any moment. 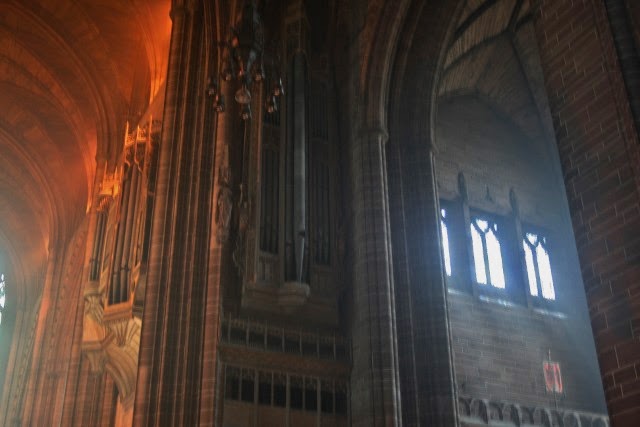 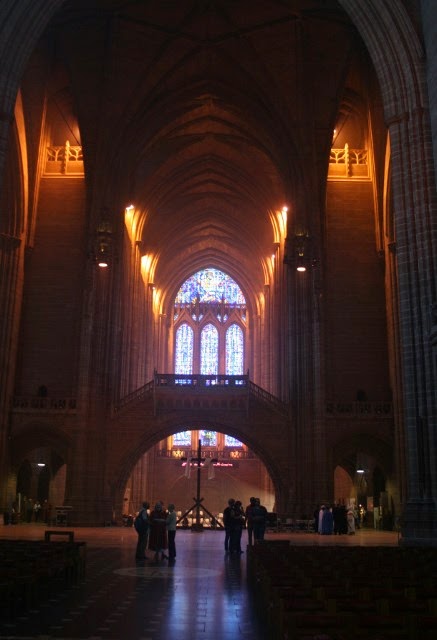 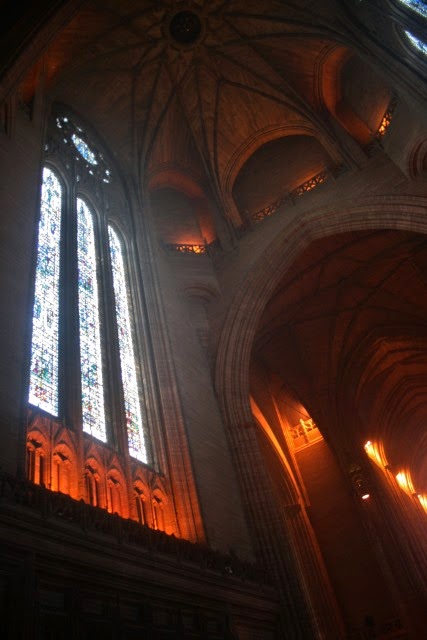 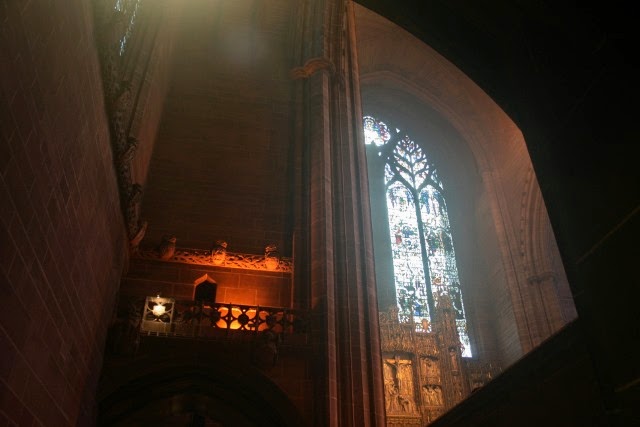 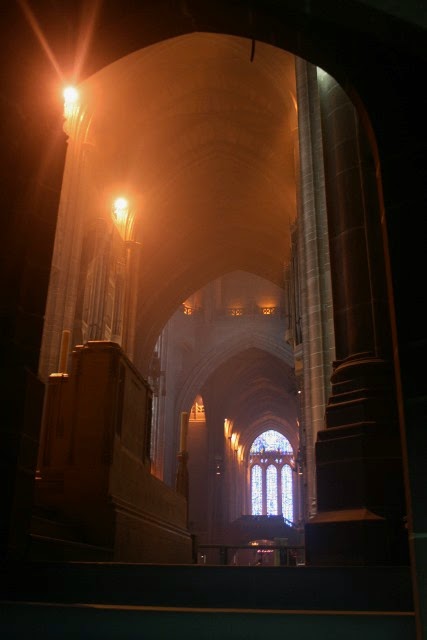 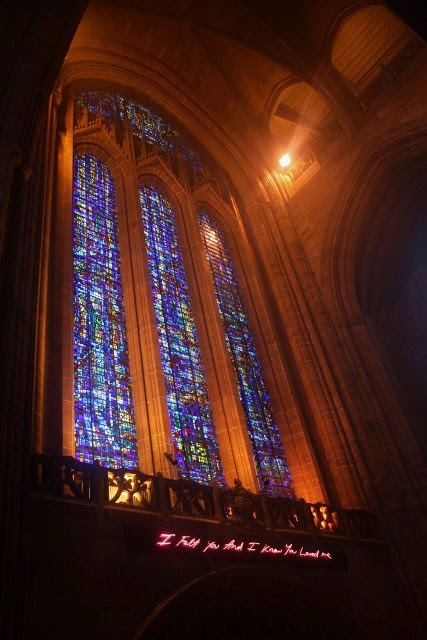 After lunch in the basement bistro of the Everyman Theatre - 'They've ripped the heart out of it!' wailed my companion to the sound of muted ambient jazz. 'It was full of character 30 years ago!' - it was on to the waterfront.

Until this weekend I was only marginally more familiar with Liverpool than Manchester.  I'd travelled through twice before en route for Waterloo, just up the coast, and some years later Dun Laoghaire, and as a very young child I have the vaguest memory of being driven through the Mersey Tunnel at night by my Uncle Noel, who lived in West Kirby at the time and who swore he saw a mermaid swimming towards us.  I had, however, never been on a Ferry 'Cross The Mersey, so this had to be rectified. 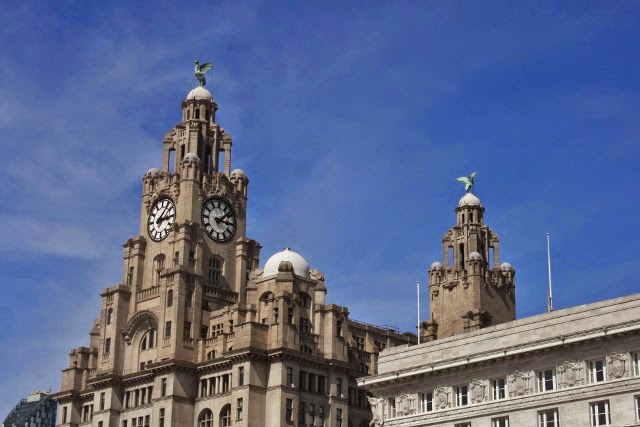 First, though, the Liver building, dead familiar to every child who grew up in the 1960s and 70s.  Apparently, one of the sculpted birds atop is female, the other male.  The female stares out to sea, waiting for the first glimpse of the homecoming sailor.  The male faces inland, trying to see if the pubs are open yet. 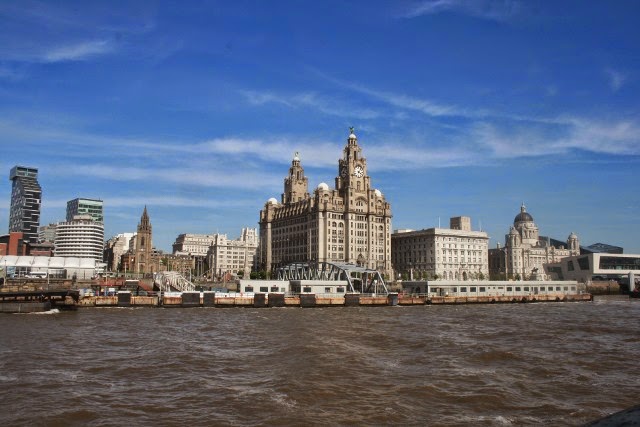 Then we were off on a £8 tour of the river, with my companion muttering that 30 years ago you could go back and forth for free, so long as you didn't get off on the other side.  It was worth it, though. 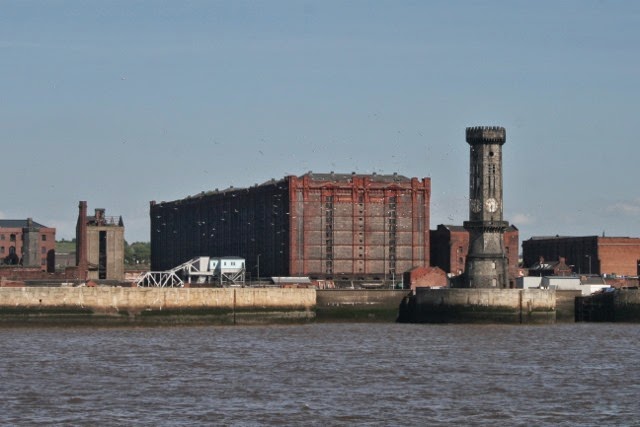 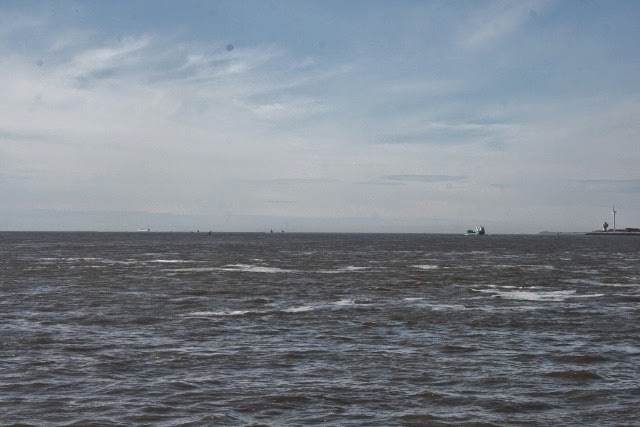 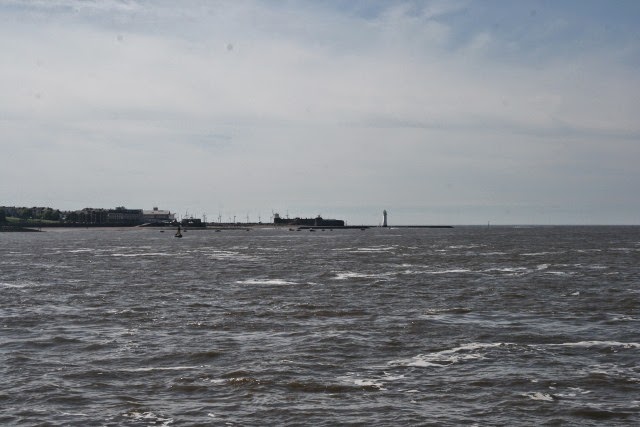 After a while the names began to sound familiar and I realised I was in the middle of a folk song ...

And now, my lads, we're off Fort Perch Rock
All hammocks lashed and sea-chests locked
And we'll haul her into the Waterloo Dock ...

Yes, it's Whip Jamboree, about that homecoming sailor the female Liver Bird is waiting for, who - the next verse tells us - heads straight for Dan Lowry's, reputedly a popular playhouse on Paradise Street. 'This is unrecognisable from 30 years ago!' complained my companion as we retraced his steps.  And true, it's not so much paradisiacal as  maniacal these days, with shoppers darting from one emporium to the next.  So we finished the day at Ye Cracke instead - another pub formerly frequented by one John Lennon (Where did my beloved George with the long, lupine teeth drink? I wonder) and miraculously unchanged (almost) from the 1980s.

Posted by Deborah Harvey Poetry at 21:09