Stories from Purdown and the Madness of Trees 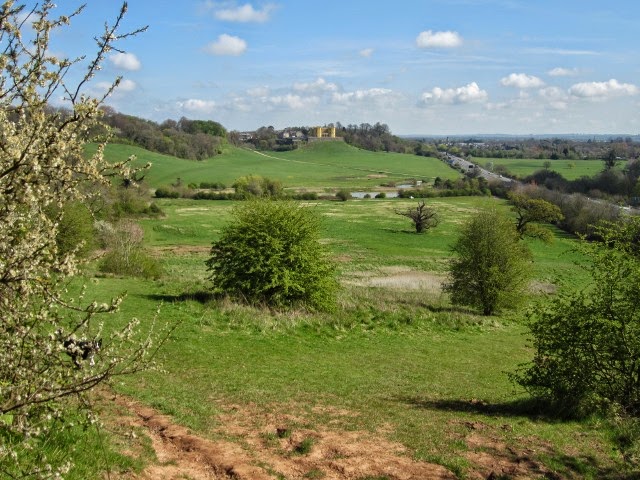 The Stoke Park Estate on Purdown is one of my favourite places in Bristol and part of the reason why I like it so much is its location ... 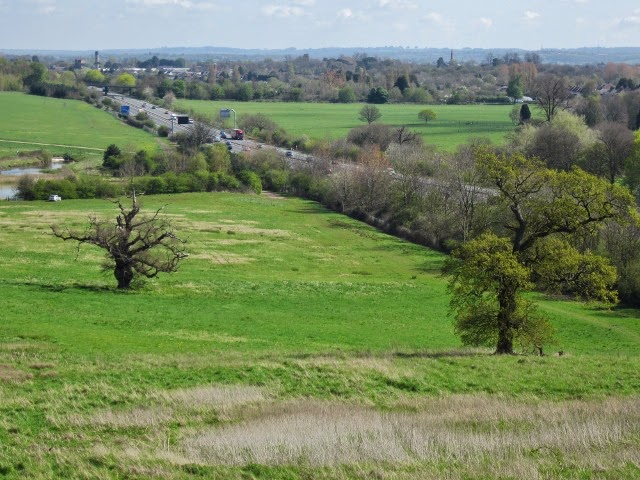 ... right on top of the M32.  I mean, how brilliant that there is a breathing space for wildlife - and beauty for anyone who cares to go there - even next to a motorway leading straight into the heart of the city, less than three miles away.

I have a trick for blanking out traffic noise and it is this: I pretend that it is the sound of the ice age torrent that carved the original valley - in this case, I suppose, an early incarnation of the now rather lethargic River Frome.  It works at Burwalls Cave in Avon Gorge as well. 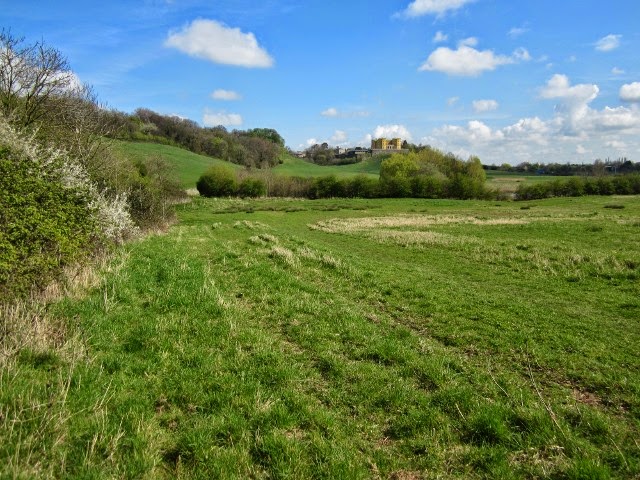 I wasn't always as fond of this area as I am now - in fact, it scared me when I was small.  The building you might just be able to spot perched on the hill in the distance is the Dower House, a rather forbidding edifice most recently rebuilt by 4th Baron Botetout (apparently) in 1760.  It's now converted into apartments and although I really don't like the lurid shade of yellow it's been painted, it looked a lot worse when I was a child, as the bare stone was dark and it served, as my parents cheerfully informed me, as 'the looney bin'.  'If you ever go mad,' they said, 'that's where you're sent.'  'What, for ever?' I squeaked.  'Sometimes,' came the answer. 'It depends if you get better or not.'  As I was the sort of small child already prone to wonder how you knew if you were mad or not, and if you didn't (I didn't), did that mean you were?, from then on I was frightened every time we drove past. 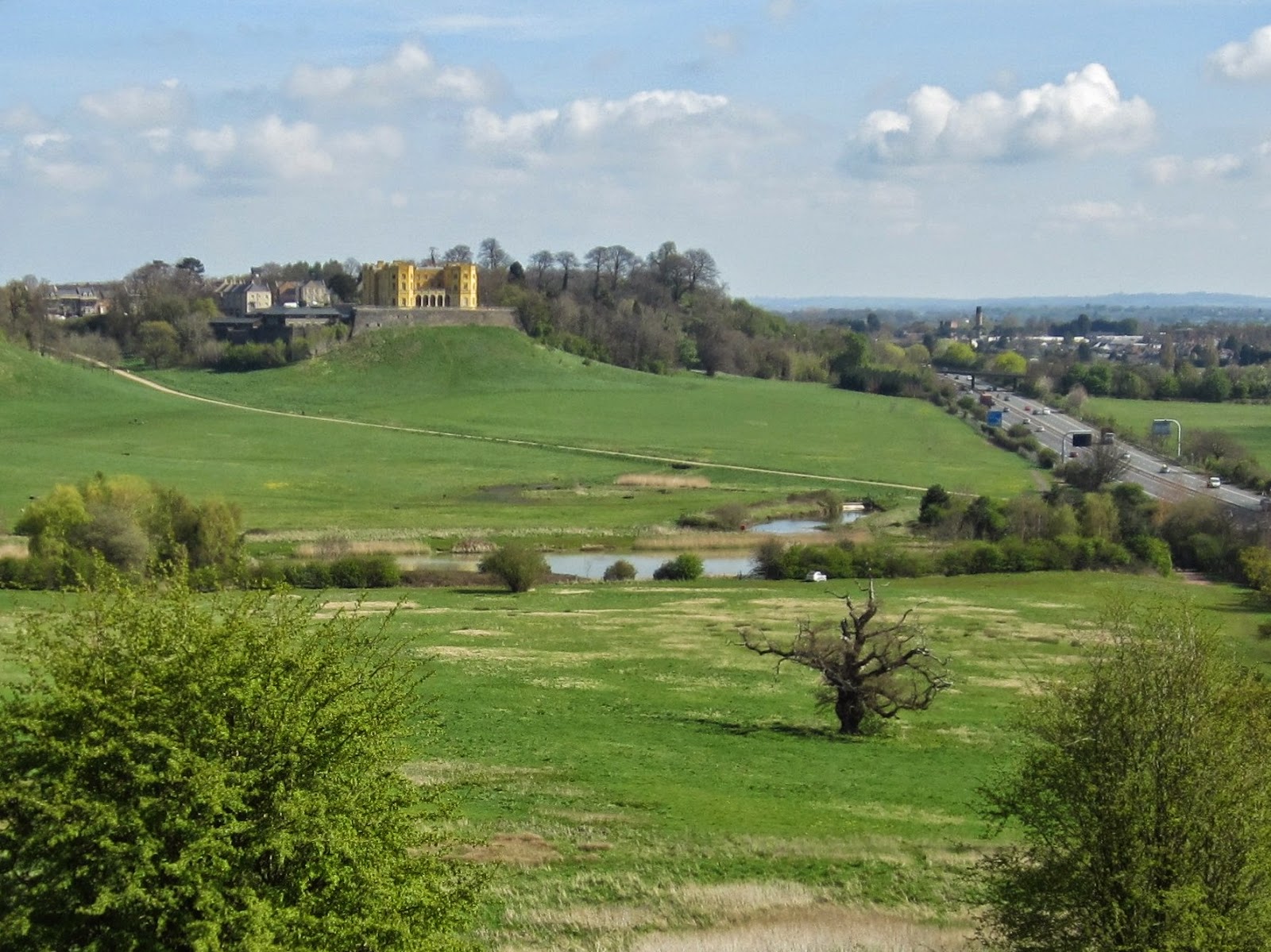 It's easier to see in this photo, as is Duchess Lake at the foot of the hill, although not the stone obelisk which overlooks the lake.  As every Bristolian knows, it was set up in memory of Lady Elizabeth Somerset who died aged 18 in 1760 when her horse bolted and she fell.  And this story persists despite there being evidence that she actually died far less romantically, ie in her bed of the fever.  It isn't the original lake either, that one having been drained to allow the motorway to be built in 1970 - but not before one of the boys from our nearby suburb drowned in it. 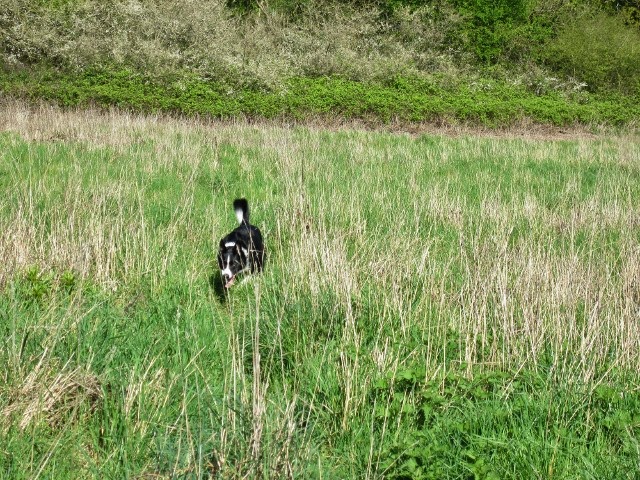 So, yes, this place has always been a bit scary to me, but I'm largely over my collywobbles now. And since Ted loves it, we go there quite often, although yesterday was our first visit since January owing to the slipperiness of the footpaths after all the rain we had a while back. 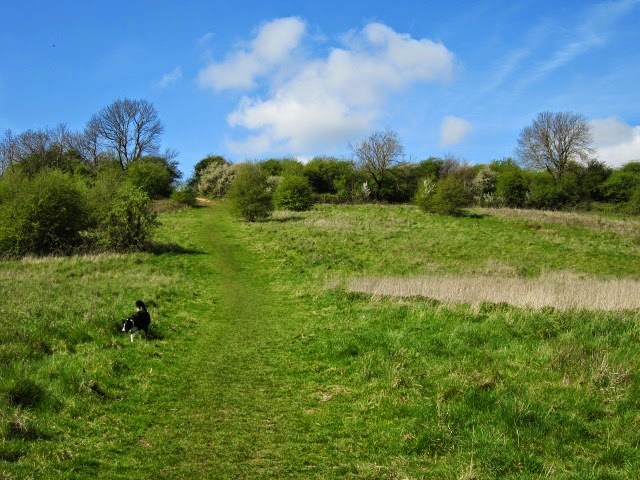 But now spring is in full joyous leap, as evidenced by the scrape of a chiff chaff - truly the sound of spring(s) - while high overhead a buzzard drifted.

As I didn't have an awful lot of time to spare, I decided to visit three of my favourite trees on the estate.  The first is this splendid oak, which is just coming into leaf.  It seems to have shed a couple of branches during the recent storms. 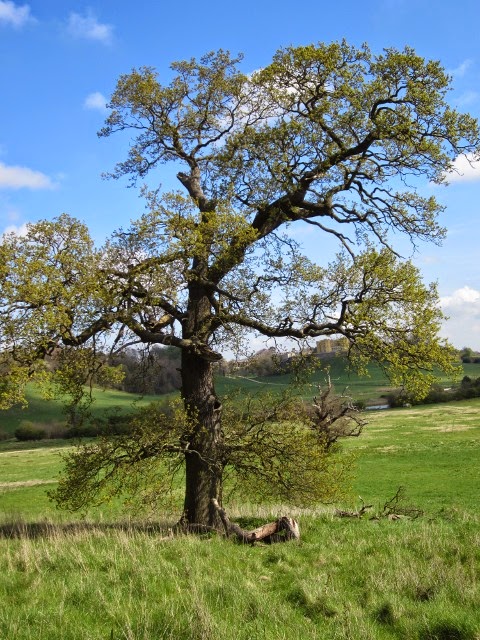 The second - another oak - lies a little way further down the hill, and is much older - a fat-bellied, venerable thing.  The approach to this monster lay over already quite substantial nettle beds.  It will be unreachable in a couple of weeks, I should think. 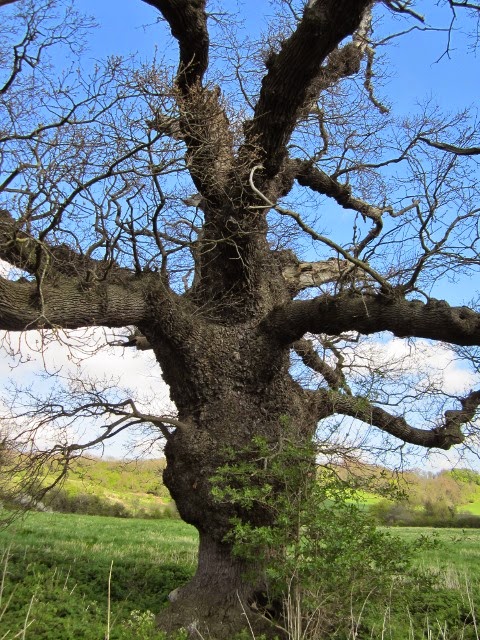 Camping out under its still bare canopy is an elder tree, already leaved and nurturing the beginnings of those frothy plate-like blossoms it will carry come June. 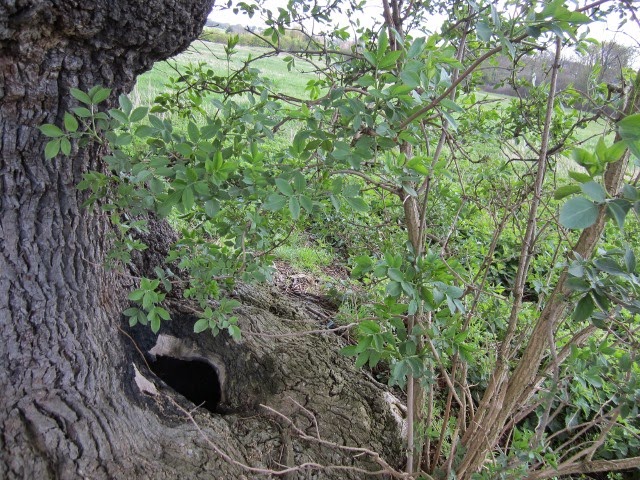 The massive bole is hollow, so I crouched down to take a few photos ... 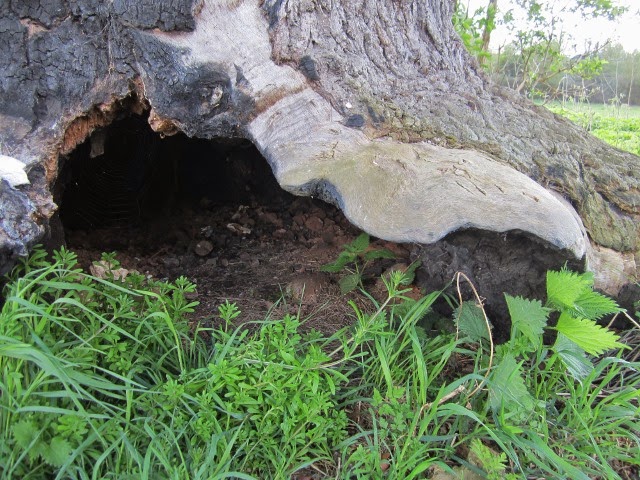 ... and stung my bum on some of those nettles.  The tingling didn't stop until bedtime.

The third and final tree I visited was this ash, surrounded by masses of blackthorn.  It's not quite as decrepit as the one I saw last Saturday between Semington and Seend, but marching around waving its arms in the air, nonetheless. 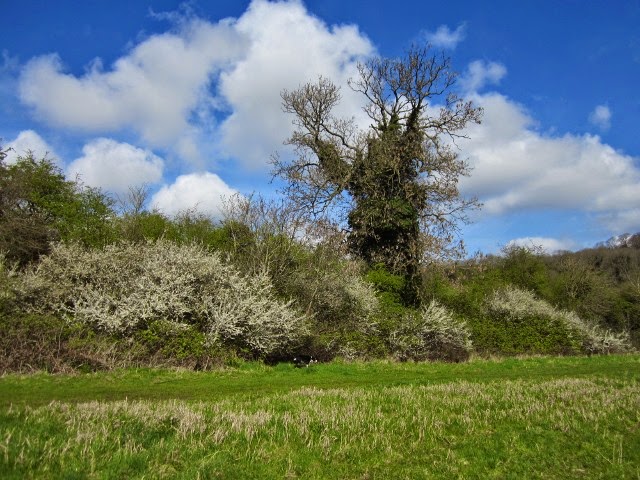 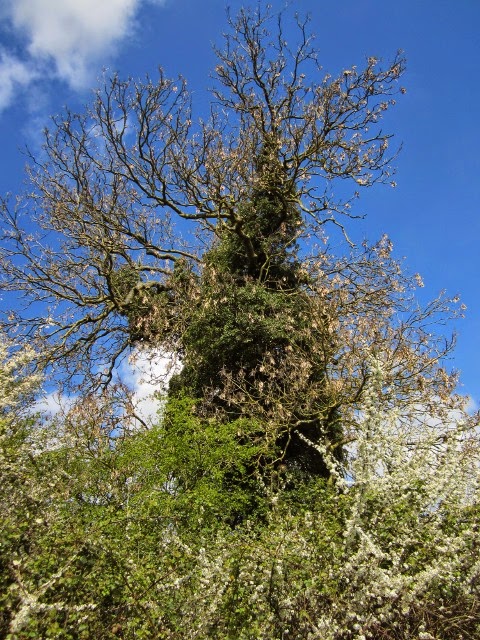 I'm glad there are far more enlightened attitudes towards madness these days than half a century ago, and that the notion of the looney bin is firmly in the past.

Posted by Deborah Harvey Poetry at 16:37