A Scramble Up Tavy Cleave 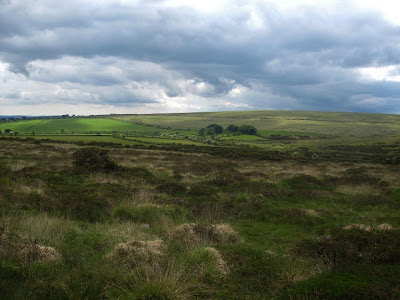 Just back from a swift visit to the biscuit tin by the sea with Son the Younger and the hound.  It rained a lot so we watched Sherlock on DVD.  And when it wasn't raining - which was yesterday - we headed up onto Dartmoor, to explore Tavy Cleave.

On paper, Tavy Cleave is a straightforward walk - you park a mile south of Lydford on the A386, enter the moor on a military road, pass Willsworthy firing ranges and follow Wheal Friendship Leat and then the River Tavy up through the Cleave to its confluence with the Rattle Brook.  Then you simply climb up the side of the cleave, turn left and saunter back along the top. 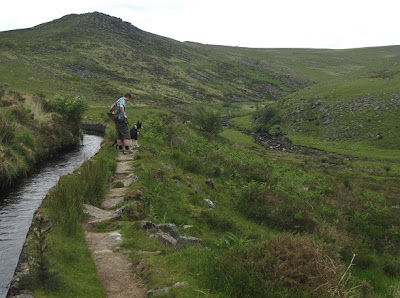 In reality, the terrain is challenging, especially beyond the headweir of the leat,
consisting mainly of boulders, holes between boulders and bog.  Then, once up high, there's oceans of choppy, tussocky moorland to cross.  The scenery is ample compensation, however, so I'll let the pictures do most of the talking.

On a long weekend when there were gratuitous displays of flags everywhere, it was a relief to see that the flagpoles on the firing range were empty - no live firing on a bank holiday, of course, but good to be absolutely sure. 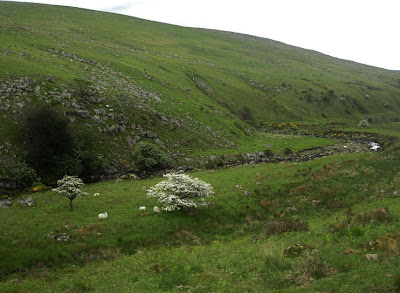 After a run and a bit of ball chasing, Ted had to go back on the lead as we didn't want him to indulge in any sheep chasing.  He didn't seem to mind too much as he still got to splash in the leat and later on the River Tavy as it plunged through its gorge.

Dartmoor is pretty high and exposed, so the hawthorns are still in flower in June. 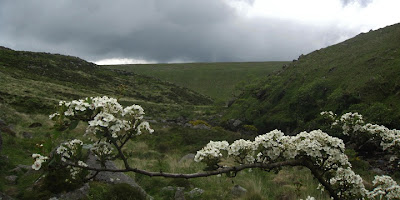 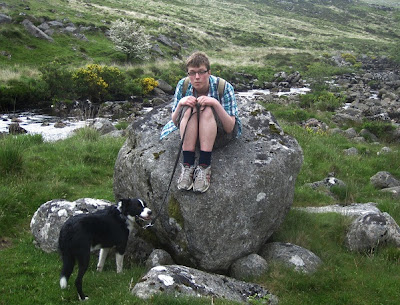 We had a bit of a rest at the leat headweir, to ready ourselves for what was to come - a clamber alongside the fast-flowing Tavy.  If Son the Younger was doubting the wisdom of accompanying me, he didn't let it show (much).

Parts of the rest of the walk up through the cleave were easy-going - grassy shores and at one point smooth rock right next to the racing waters.  Other times we had to climb great banks of granite boulders, taking care not to trap our feet in any hidden gaps between them and risk breaking our ankles. 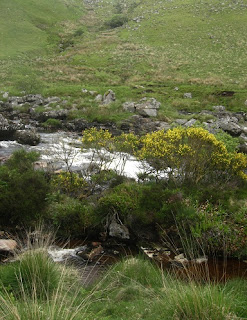 In addition to hawthorn, the spring gorse was in brilliant bloom, as well as ubiquitous rowan trees, with the occasional fox glove adding a dash of magenta to the mix . 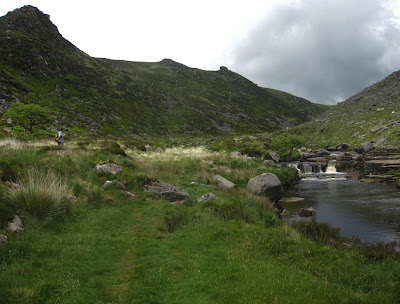 (So much for letting the photos do the talking; these piddly little pics give no real idea of the grandeur of the place. Maybe I'd better post a couple of bigger ones, looking downstream.) 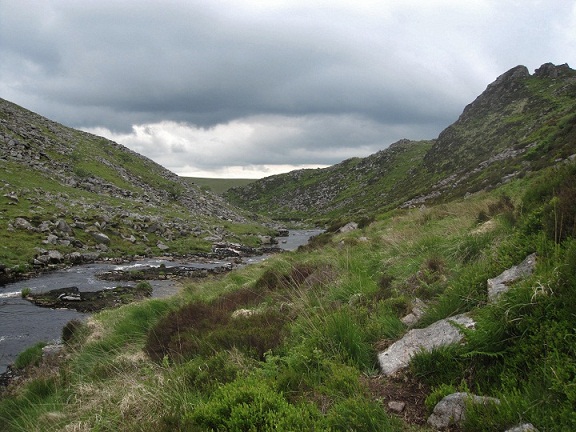 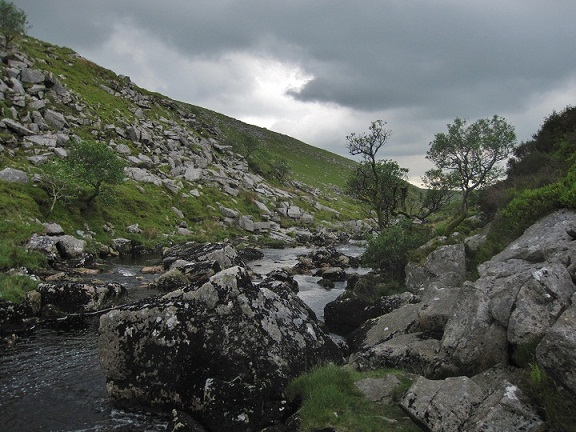 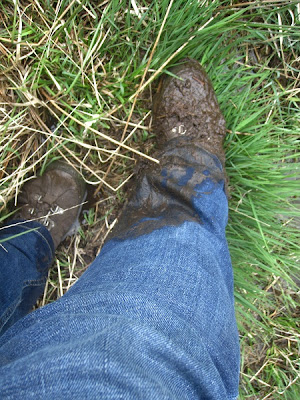 When we weren't bouldering, we were trying not to get stuck in areas of boggy ground - not always successfully.  I almost lost my walking shoe to one of them, but managed to extricate it still half on my foot.  Just as well, as we had now reached the confluence of the Tavy with the Rattle Brook (so named because of the considerable noise it makes), and it was time to climb up the side of the cleave to the slopes of Hare Tor above us. 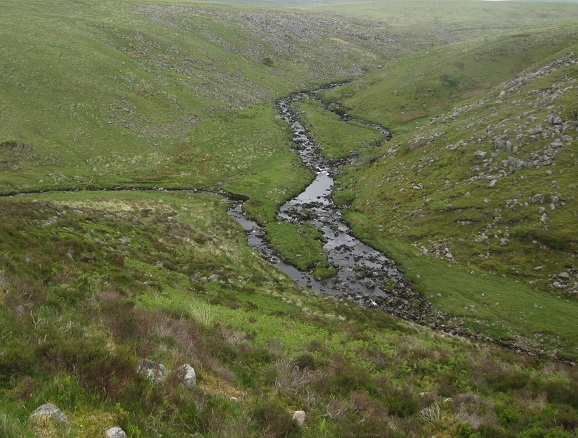 From higher up there was a lark's eye view of the meeting of the two streams - Rattlebrook on the left, Tavy on the right ... and of the surrounding moorland, alternately splashed with sunlight and cloud. 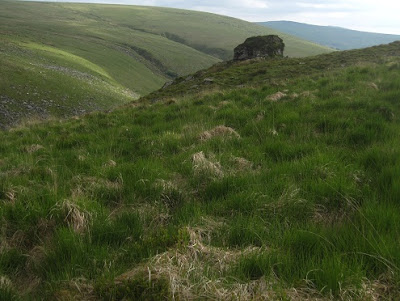 By now my ankles, knees and hips were beginning to feel the worse for wear, but the wild beauty of the place made every step worth it. 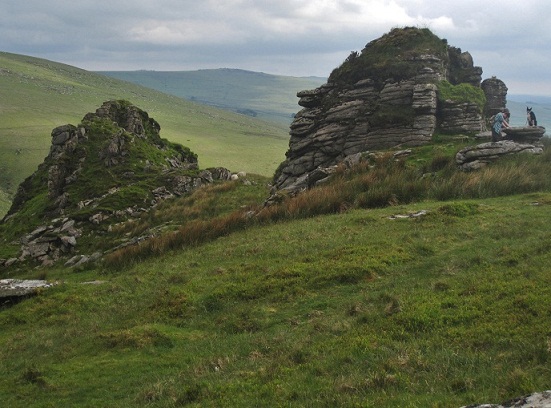 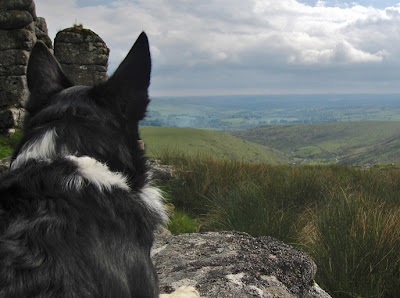 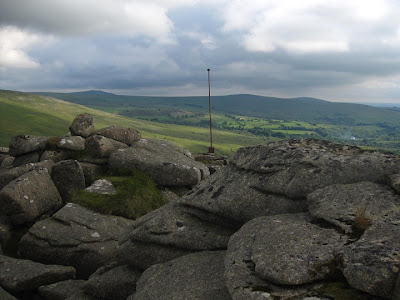 Our next stop was Ger Tor, from which there were more stunning views, much appreciated by Ted.   Look, no flag!
We then had to pick our way across very tumpy grass, using sheep tracks where possible, to a boundary wall which led us back to the firing ranges.  The leat we'd followed on the way up the cleave shone silver in the fitful late afternoon sun. 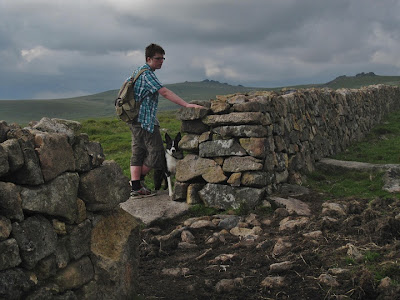 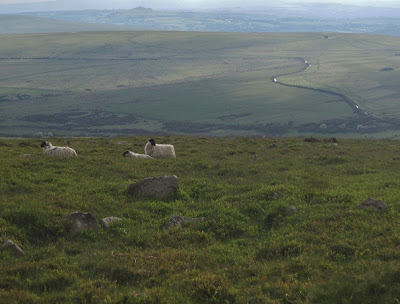 Eventually we passed the firing ranges, every step now a battle with my complaining ankles and knees. 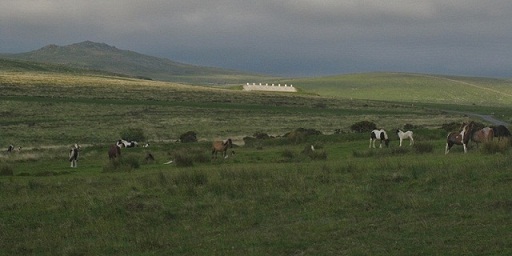 It comes to something when you think you might not make it across the car park and into the pub (The Plume of Feathers in Princetown in this instance).  In the end I did, but with the sorry realisation that if I want to carry on challenging myself over Dartmoor, I need to shift the weight I've put on since I acquired a car and stopped walking everywhere.  Looks like Ted will get a lot more outings over the next few months ... 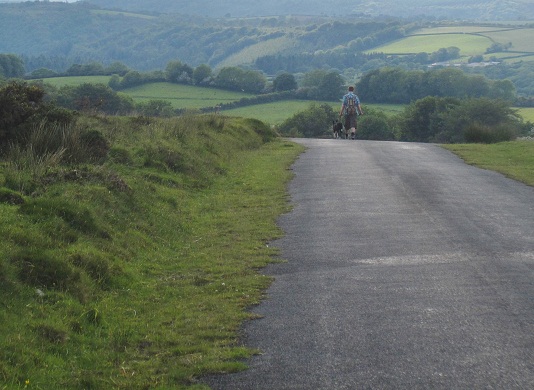 Posted by Deborah Harvey Poetry at 01:05