Along the cliff edge

Kilve is a favourite place, and since we were newly allowed, we decided to visit to mark Son the Younger's birthday. Of course, the pub was shut, so we sat on the very edge of the cliff, swinging our legs, and had a picnic instead. 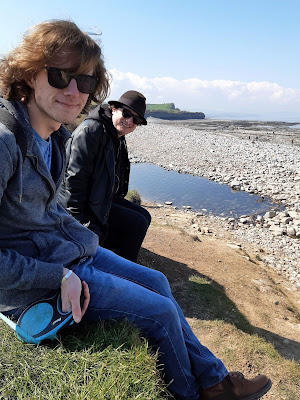 I should add that the bit of the cliff we were sitting on was about three foot above the level of the beach. It soon gets higher, and becomes unsafe anywhere near the edge, of course. 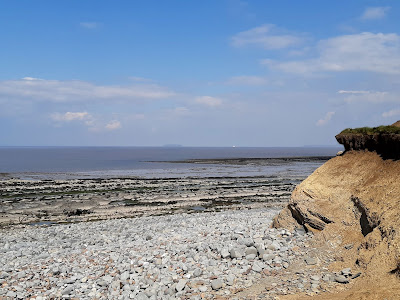 It hard to see here, but those are not all pebbles; some of them are people - in fact, Kilve beach was more crowded than I'd ever seen it, probably because of a combination of it being the Easter holidays/a beautiful sunny day/just after the lifting of the lockdown. I'm certainly feeling the urge to visit a few of my favourite places, to keep the days in my pocket and look at them during any future lockdown. I'm not sure the vaccination is going to be magic wand we wish it to be. 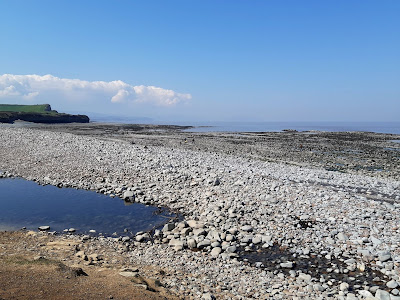 In view of the busyness, we decided to take a walk along the top of the cliffs, and since most people head south-west towards East Quantoxhead with its church and picturesque duck pond, rather than north-east towards Hinkley Point nuclear power station, we decided a change of route was in order. 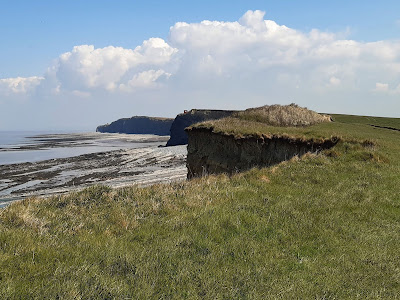 It was too hazy to see more than an intimation of the coast of Wales, but we could just make out Steep Holm to the north-north-east, and every now and then there was a flash of the area's fascinating littoral rock formations. 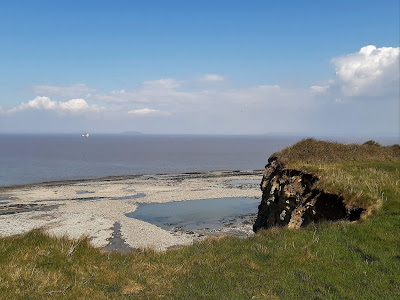 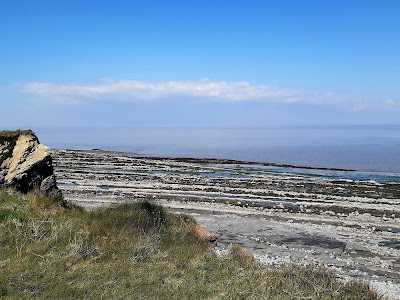 There were also several reminders of the locality's history and geography, in the form of old pillboxes. 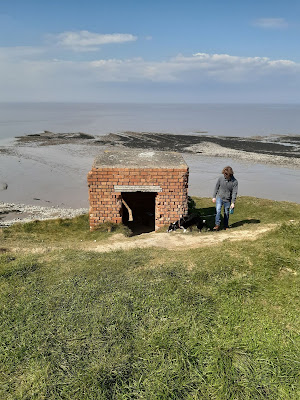 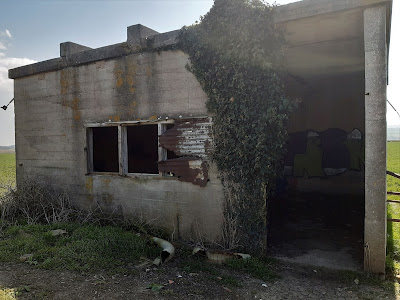 We also spotted what we thought from a distance might be a lighthouse or a WWII lookout, but which turned out to be an observation tower, part of the Royal Navy Aircraft Range - apparently, this part of the coast is still used as an air gunnery practice range for helicoptors. 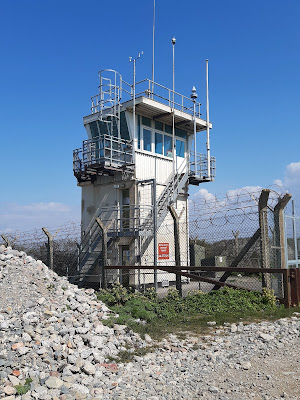 It wasn't all military stuff, though ... I saw several pairs of stonechats ... 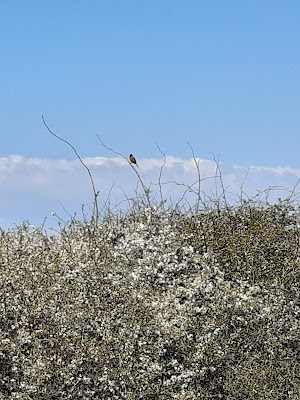 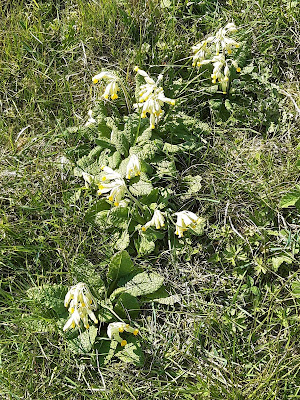 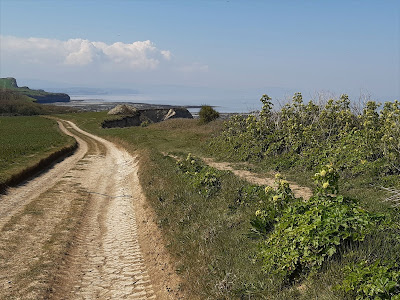 ... and some far more ubiquitous, far more pungent alexanders.
Eventually we got to within a couple of miles of Hinkley Point C. When it filled the lens of my camera, I decided that was close enough. I still find it hard to believe we didn't switch to renewable energy sources after Chernobyl. (No, wait, I don't.) 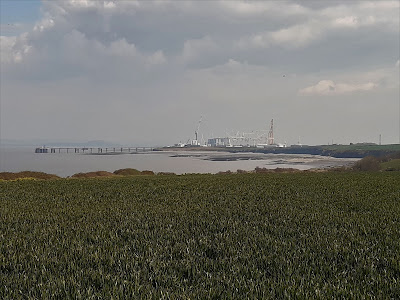 I felt happier heading in the opposite direction, even though Bristol is well within the 80km evacuation zone in the event of a Fukushima-style event in the Bristol Channel.
All along the cliff there are what look like enticing little paths but which actually lead abruptly to the shore, some eighty-odd feet below, so Cwtch was kept on the lead so she could learn about the edges of things in safety. 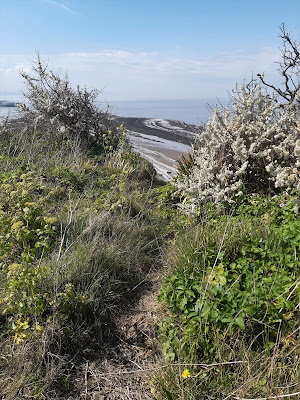 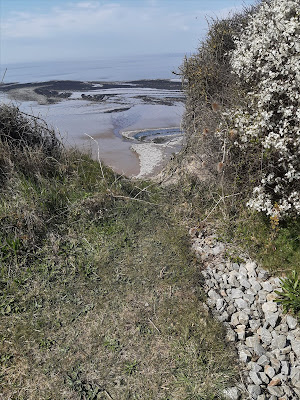 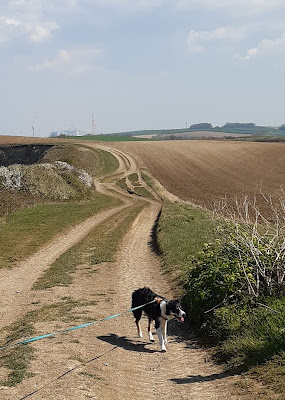 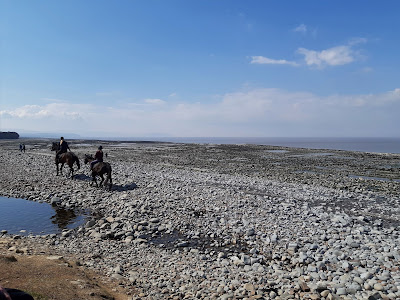 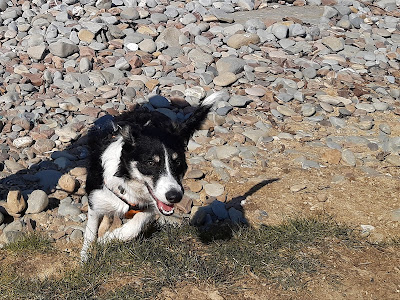 Back at Kilve, we resumed our spot on the cliff edge for a bit, and then made our way to the Chantry Tea Rooms, where we queued for takeaway ice cream, eaten in the car park, and very lovely it was too. 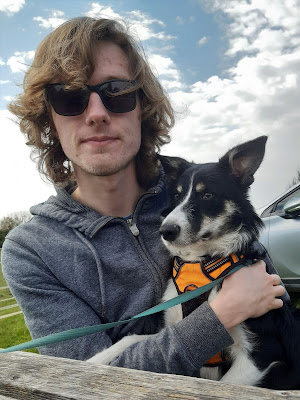 A moment to admire my first flowering garlic of the season, and take a few photos of a tired but really quite photogenic little collie, and it was time to go home. A lovely day to bank against the less good ones. 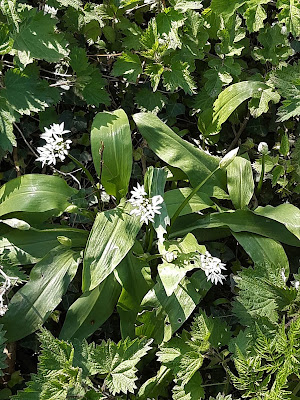 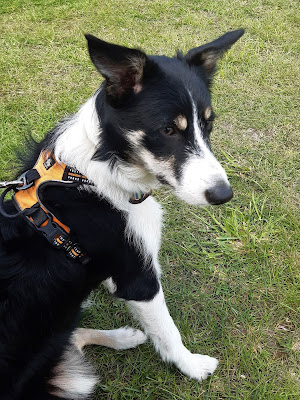 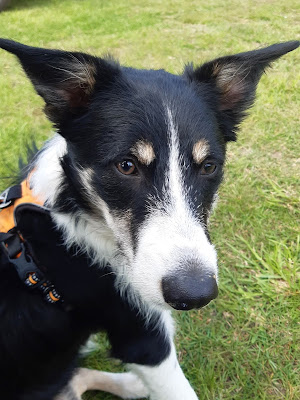 Posted by Deborah Harvey Poetry at 13:42