On Sneezing and False Teeth

Getting over my latest bout of gastritis - the fourth in three months. This time I was in sufficient pain to be whisked to our local A&E. These days it's not a place for the faint-hearted. The staff were run off their feet, and as I was waiting for a taxi to get home, a bloke who looked about 40 was ejected, complaining that 'all the fucking foreign people' were being seen before him. He was going to WRITE TO HIS MP. The nurse accompanying an elderly woman who was waiting for her husband to pick her up looked at me and rolled her eyes. I bet they hear that all the time. 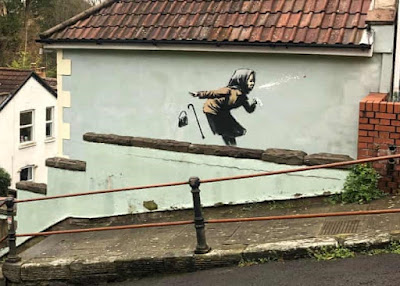 I was pleased to see the new Banksy that's appeared on a house at the bottom of Vale Street in Totterdown. (The steepest residential street in the country, don't you know.) It's of a woman sneezing her false teeth out, and it reminds me of a story my late Uncle Noel tells in his book about my grandmother, Hilda Hill, and her neighbours in Douglas Road, Horfield in the 1920s:

'Then Mrs Amor, further down the street. Kath to her friends. Born to well-to-do parents but somehow ending up in Douglas Road with her second husband. Very smart but with a slight flavour of 'no better than she ought to be' about her. Given to muttered conversations with Mum that suddenly seemed to stop if I entered the room. Don't know what they were about, but suspect that Les Dawson used to have the same subjects under consideration when he did his sketches for the television. My favourite story of Mrs Amor concerned a visit to town with my mother: when walking up Union Street, Kath sneezed suddenly and her dentures flew from her mouth and landed in one of the numerous heaps of horse manure common in the streets in those days. Faced with a choice between such weighty considerations of hygiene and vanity, Kath opted for the vanity and replaced the dentures.' 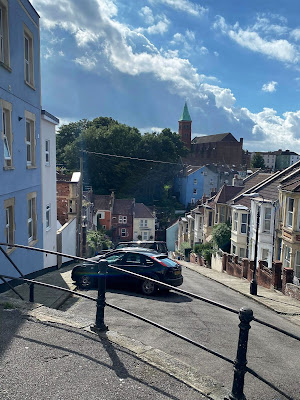 Here's a photo of Vale Street back in September. You can just see the house that now bears a Banksy at the end of the road on the right, in the centre of the photo.

Posted by Deborah Harvey Poetry at 08:44