Huffing and Puffing up Maes Knoll

Maes Knoll. I'd been meaning to climb it for years, ever since I first saw it from the stone circles at Stanton Drew. And so I did, and although this is definitely a TED Walk in the time of Coronavirus, I've decided to give it a blog post in its own right because it was just bloody glorious. 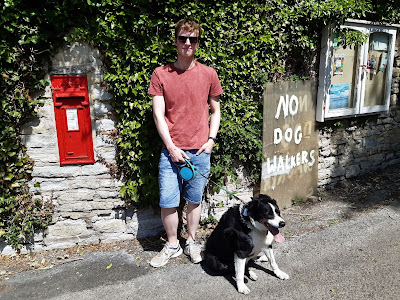 Son the Younger, Ted and I started our walk in Norton Malreward. It was pretty hot - around 25° - so I was quite glad that we'd chosen the shorter, although possibly steeper route. Though the village itself could have been a bit more welcoming. 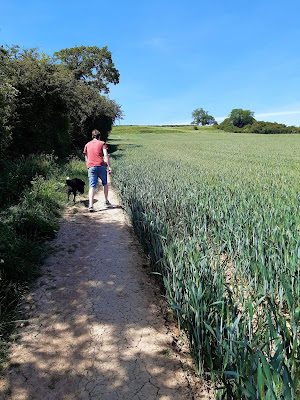 The footpath up to the summit of the hill is a lot more daunting than it looks in this photo.  My companions loped up it easily ... 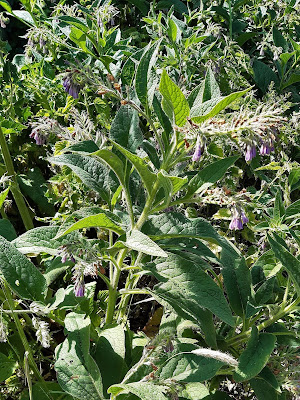 ... but every hundred steps or so, I found myself unaccountably interested in the flora ... 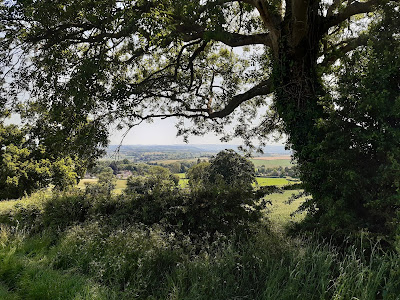 ... and this kindly, shady ash, which necessitated a pause that could be construed as a bit of a breather. 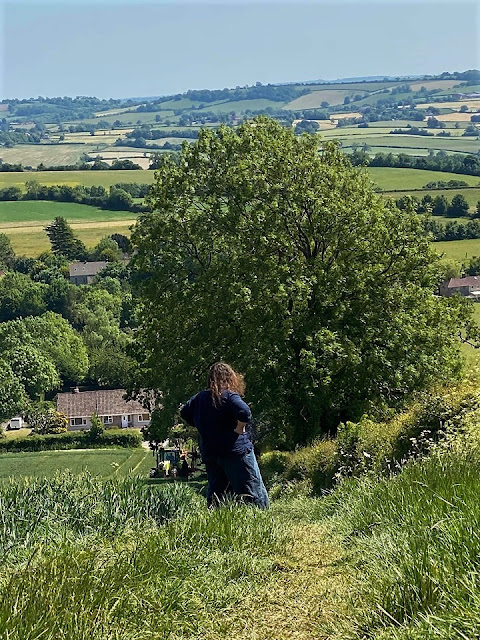 This photo, in which I'm obviously merely enjoying the view, gives you a better idea of its gradient. 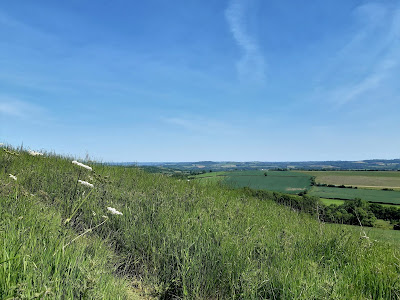 We stopped and sat on a bench for a bit near the top of the hill. 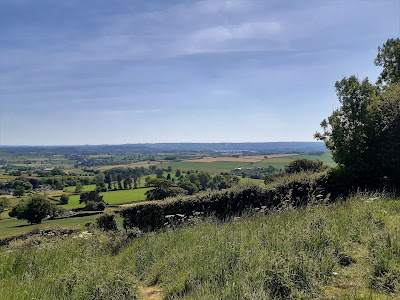 The views were hazy but amazing. I liked that I could see Chew Valley Lake and the transmitter on the Mendips, which made me think of all my poetry friends (and my pottery friend) in Wells, Glastonbury and beyond. 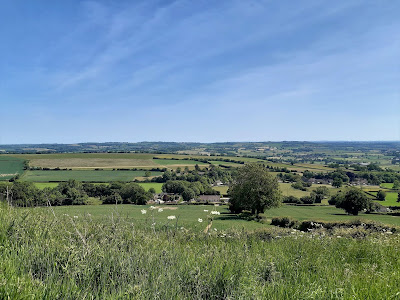 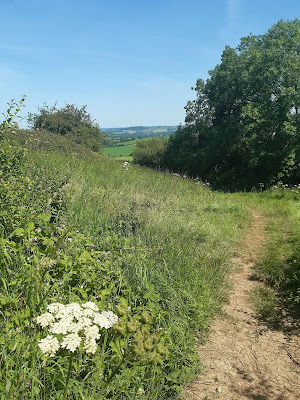 There was just a little more climbing to do ... 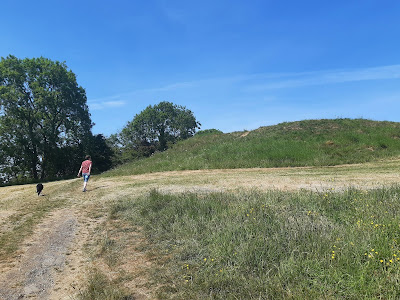 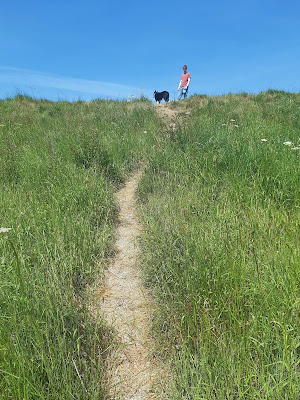 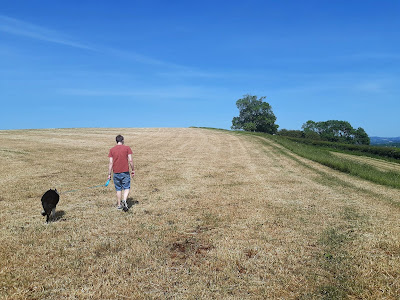 And even then there was a fair bit of walking to be done to tour its considerable circumference.
The ground was dry and crunchy underfoot. 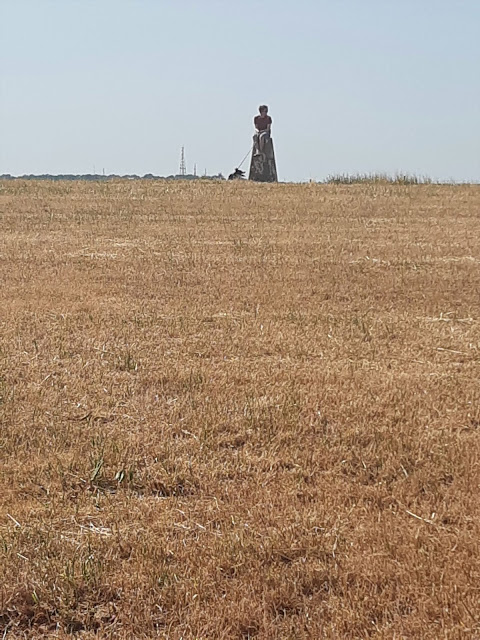 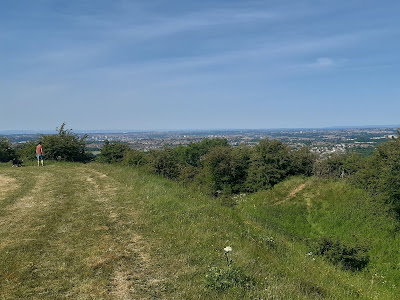 On its northern side, Bristol comes into view, startlingly close on account of the lack of edgelands on its southern side. 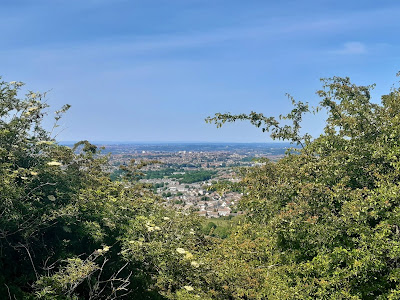 This is a hazy view of Purdown, with its telecommunications tower and the yellow Dower House. 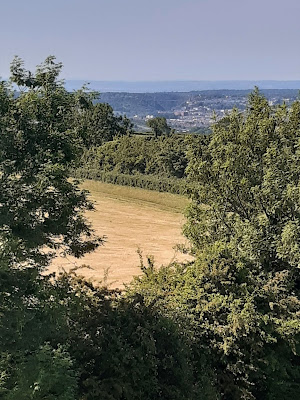 We could also glimpse all three bridges - the two Severn crossings and Clifton Suspension Bridge - though the newer Severn Bridge is harder to make out than at the other end of the ridge in Dundry.

Here's the Suspension Bridge in the middle distance. 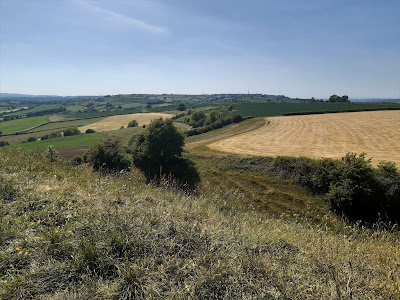 There's a narrow neck of high ground at the western end of the fort, which is protected by a massive ditch and a 50 foot bank known as 'The Tump'. 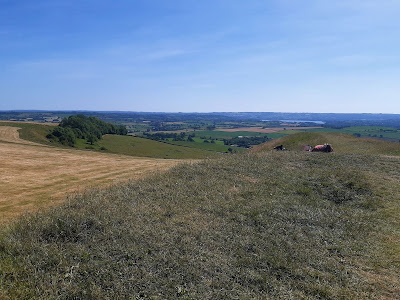 Time for a bit of a lie down. 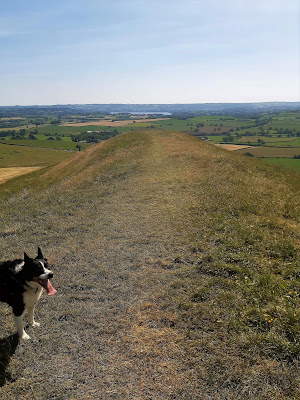 Top of the world up 'ere 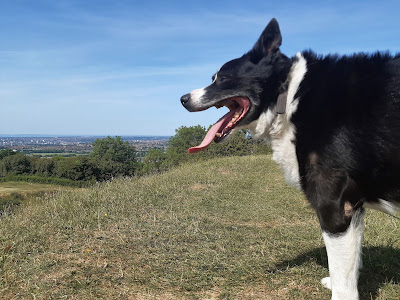 'All these things I will give thee,' saith the Ted, 'if thou wilt bow wow down and worship me.'

Posted by Deborah Harvey Poetry at 11:52