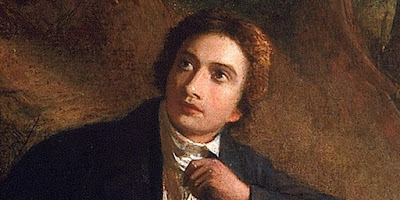 Spring is a time of renewal, so here's a poem on that subject from my collection, Breadcrumbs. It has an epigraph from a letter written by John Keats to his brother and sister-in-law, George and Georgiana Keats, in which he says 'We are like the relict garments of a Saint: the same and not the same: for the careful Monks patch it and patch it: till there's not a thread of the original garment left, and still they show it for St Anthony's shirt'.

‘We are like the relict garments of a Saint: the same and not the same’
John Keats

Her mouth forgets him first, her tongue
sloughing his aftertaste hours after their parting

Next, her skin divests itself. Within a month
there isn’t an inch that remembers his touch

Three years and the hair he preferred cropped
falls past her shoulders in torrents, never the same river twice

and she’ll be herself, the same yet different,
the relict garment of a saint,

a patchwork sail on the leafing mast
of Theseus’s ship

Breadcrumbs is available to buy from Indigo Dreams Publishing and the usual outlets.

Posted by Deborah Harvey Poetry at 14:24