A eulogy for my father 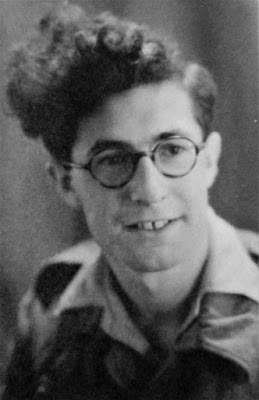 Lionel Raymond Harvey was born on 11th March 1922 at 41 Cobourg Road, Montpelier, Bristol, the second son of Graham, a railwayman and veteran of the Somme, and Ida. His elder brother, also Graham, had died the previous year at a few weeks old; his sister, Audrey, was born 18 months after him.

Before long the family moved to Herbert Street in Totterdown, and then, in 1926, to the new council estate in upper Horfield. One of Dad’s earliest memories was of moving day. His father, riding on the van, assumed he was with his mother; his mum, busy with baby Audrey, was certain he was with his father, and four-year-old Lionel was left behind at the old house, to be taken in by neighbours until his parents realised and re-crossed the city to retrieve him.

Life wasn’t always easy in Macaulay Road; in particular, money was in short supply. Dad remembered his mother hiding a jar of Shippams fish paste behind the skirting board to avoid a confrontation with his father, and he vowed at a young age never to argue about money with his future wife. Once married, he duly handed over his pay packet to my mother every Friday.

On his seventh birthday Dad was given a football, and instantly he was the most popular lad on the street. He became an agile player with swift reactions; aged 13, while working at his first job in a shoe shop down the Gloucester Road, he trapped a rat under his foot and held it there until the shop cat could be found. He and his father regularly watched Bristol Rovers play at Eastville, and his mother could work out the score by looking at their faces as they turned into Macaulay Road on their way home.

When war broke out, Lionel was working at the BAC in Filton, and although this was a reserved occupation, he enlisted in the RAF as soon as he was old enough, seeing action in Palestine, Egypt, Tripolitania and Italy.

Like many veterans, Dad didn’t talk much about his war service. He mentioned getting the  bumps in the Western Desert on his 21st birthday, and how hard it was to play football on sand dunes, but kept most of what he went through to himself. The friendships he forged during this time were renewed decades later in the 1990s, when my parents attended RAF reunions in Stratford-upon-Avon, and these gave Dad the chance to talk with people who had been there with him, the men he called his brothers, and he valued this.

Once demobbed in 1946, Lionel embarked upon a series of jobs, which included office work at Maggs department store, a spell as a Co-op insurance man, and a return to the world of aviation, working as a section leader at Rolls-Royce, responsible for ordering and despatching engine parts for Concorde. 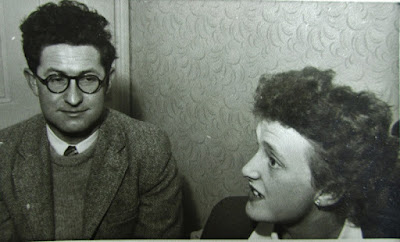 During his free time, Dad continued to play football, as well as cricket, tennis and badminton, mainly at Eden Grove; and it was here, in 1949, that he met a sporty young woman, six years his junior, from a large family in Bishopston. My godmother, Betty Daveridge, remarked how she knew something was going on between my father and her best friend, Sylvia Hill, because as he drove their group of friends home at the end of get-togethers, he started dropping my mother off last, even though this made his route rather more scenic than necessary. My mother adds that once they became engaged, Dad sold his car. I suppose it had served its purpose, and anyhow, he had to pay for the ring.

Dad was still a huge football fan. In 1946 he’d gone AWOL from RAF St Athan to watch a derby match between Rovers and City, incurring a fortnight’s ‘jankers’ when his absence was discovered. (Sadly for Dad, the match was a nil-nil draw.) And Mum recalls that upon his return from the 1953 FA Cup Final at Wembley, he woke her at 3am to describe Stanley Matthews’ legendary cross from the right wing that resulted in the winning goal, and couldn’t understand why she wasn’t as enthusiastic about it as he was.

But of course, Mum was into rugby really, and after meeting her three older brothers who all played, Dad decided it might be wise to show an interest in their sport too. Thus began his allegiance to Bristol Rugby Club. Both Mum and Dad held season tickets until Dad was well into his 90s, and after they’d called it a day, he’d listen avidly to radio coverage of each fixture, and enjoyed trips to Ken and Hilary’s apartment to watch televised matches on Sky.

Dad also loved singing. He was a founder member of Filton Glee Club, which later became Filton Male Voice Choir, and an enthusiastic participant in the many exchange visits with the men's choir in Witzenhausen, Filton's twin town. During his final years he sang with the Filtones, last attending choir practice, here in this church, the Wednesday before his death.

Germany aside, Dad didn’t do much long distance travelling after he left the RAF, though he was often to be found with his nose in an atlas. His skill with the compass, and innate sense of direction, stood him in good stead for when he and Mum did their coast-to-coast walk, from St Bees Head to Robin Hood’s Bay, with their friends, Charles and Kathleen, whom they’d met years earlier on the beach at Shaldon in South Devon.

Dad had first discovered Shaldon, with my mother and elder sister Linda, in 1960. He would describe how he’d walked onto the beach, looked across the river Teign, and felt a strong sense of coming home. This was confirmed 35 years later when a chance sighting of some family history revealed that Dad’s great-great-grandfather, a boatman from Weston, had lived and worked in Teignmouth during the 1830s, marrying a woman from St Marychurch during his stay. 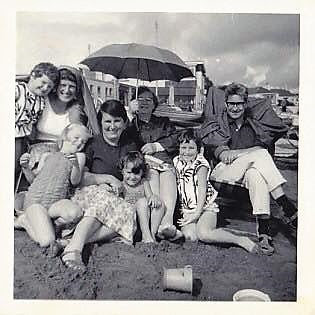 Both Linda and I recall how we were marshalled onto the beach every morning on holiday, and there we would stay until dusk, whatever the weather. That is, apart from the obligatory trip to Dartmoor – always the same route, Haytor, to Widecombe, to Dartmeet, with a detour to Princetown, before heading for Postbridge, where Dad would stand on the clapper bridge and look up the East Dart in contemplation.

‘He could be an irascible old bugger, though, couldn’t he?’ said his great friend Georges, just after his death, and yes, Dad wasn’t always easy to be around. He was a stickler for right and wrong as he saw it, refusing, for instance, to accept any corporate hospitality or even claim his expenses when he was a parish, and later district councillor, and he expected all those around him to adopt the same high standards.

Yet he wasn’t above a bit of vandalism. He could never walk past a patch of wet concrete without inscribing his and his companions’ initials in it. Linda reports that the letters LH and DH from a walk my father and I took along the sea wall at Holcombe in 1987 have survived all intervening storms, at least until her most recent inspection last summer. And whilst the Beatles were all ‘scruffy individuals’, Dad himself kept his hair long on top, earning himself the nickname ‘Curly’ and many return trips to the RAF barber on the orders of his sergeant major. 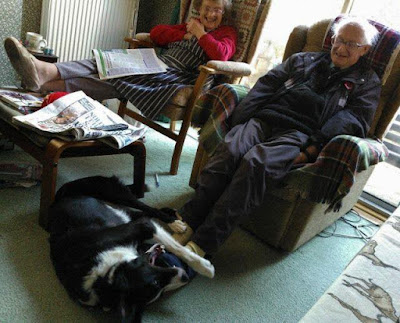 Curly was also the name his seven grandchildren knew him by, as his magnificent black and white mane gradually turned silver before thinning away altogether. He enjoyed their visits, and was latterly a devoted dog-sitter while I was at work.

Dad was well looked after by Mum for 66 years, from the day of their wedding in 1951 to his death. We are thankful he was spared a long decline and that when it came, his dying was quick and apparently painless. My enduring late memory will be of him sitting up in bed as the on-call nurse checked his temperature and blood pressure the Friday before he died. He felt horrible, he said, but nevertheless, there he was, taking his medals out of the tin he kept on the bedhead and telling her the details of each one, while she tried valiantly to sound his chest.

Occasionally Dad and I would talk about death, and I’d like to finish with a short poem by the great American poet Langston Hughes which gives beautiful shape to our conclusions:

Dear lovely Death
That taketh all things under wing—
Never to kill—
Only to change
Into some other thing
This suffering flesh,
To make it either more or less,
But not again the same—
Dear lovely Death,
Change is thy other name. 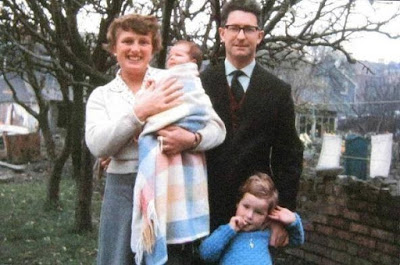 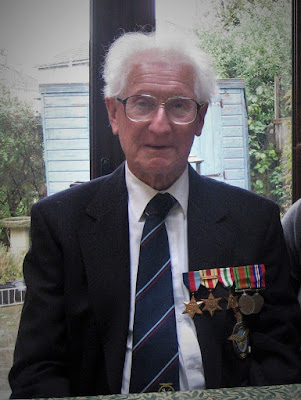 Posted by Deborah Harvey Poetry at 18:00