Goodbye To All That 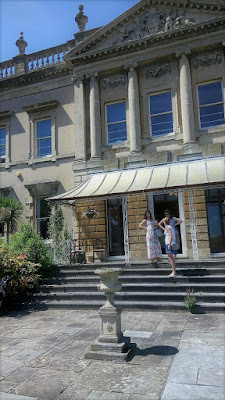 I did a jig of delight when I learnt that the private secondary school I went to was going to close and merge with another girls' school in the city, owing to falling numbers. I'd outlasted it! Hooray!

And I certainly wasn't going to accept the invitation extended to old girls to attend one of the two open days being held this summer. Wild horses wouldn't drag me there.

Except my friends from those days were all going.

And I like to think of myself as a writer, in which case the chance to return somewhere for the first time in 37 years and probe the past like a throbbing, broken tooth probably shouldn't be passed over. 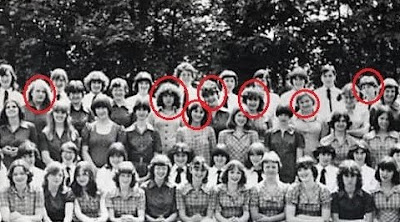 So here we were in the fifth year ... 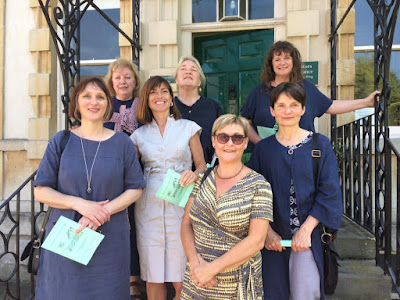 ... and here we are now.  Permitted to stand on the steps to the Front Hall. 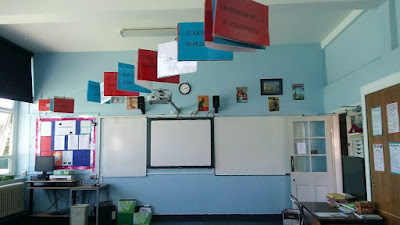 Here's our form room when we were in the first year. The four of us from Filton, who were there as a result of direct grants from the local authority and/or sundry bursaries, sat at the very back, talking loudly about David Bowie and trying not to be intimidated by the prep school girls, who knew their way around the place already, and everyone in it, and who were, it turns out, somewhat intimidated by us in return. 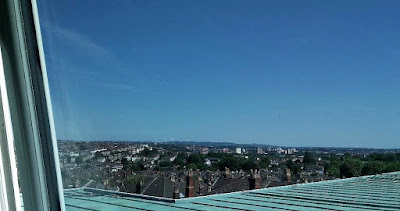 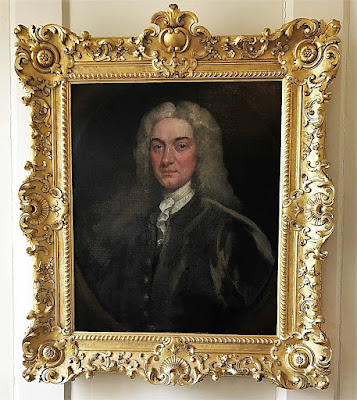 We studied history here, which meant listening to the teacher read aloud from the textbook, 'From Ur to Rome'. Sometimes she'd write passages onto the blackboard, which we copied into our exercise books. In due course, we learnt a little about the house itself. That it was built between 1732-5, in limestone ashlar, in the Palladian style, and that the man who had it built on the site of the original manor house, John Cossins, was a London merchant.

To my recollection, the words sugar plantation and slave owner were never mentioned, which is shameful, because this is how he made his money. 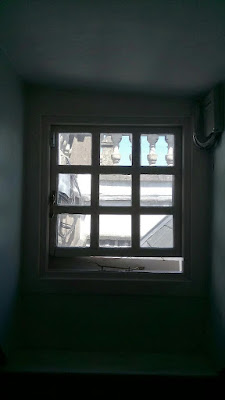 This is an attic window. I suppose this is where the domestic staff lived. I never came up here during my school career. I think it was used for private music lessons. 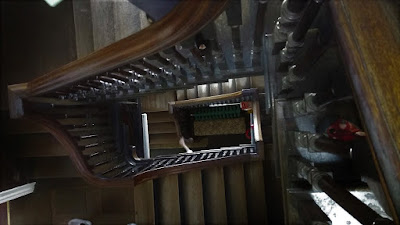 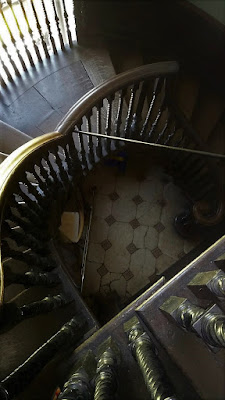 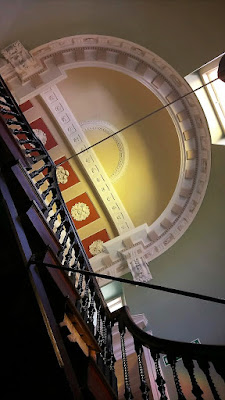 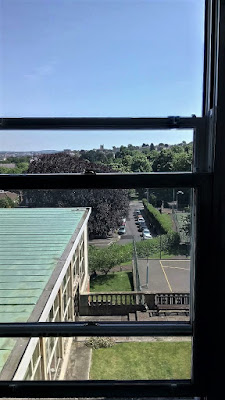 Not all of the staircases are still in use. The notoriously steep steps up to the eyrie that was Rooms 14 and 15, which we weren't permitted to descend, have been turned into a very strange storage cupboard. The outstanding views over Bristol are still there, though. 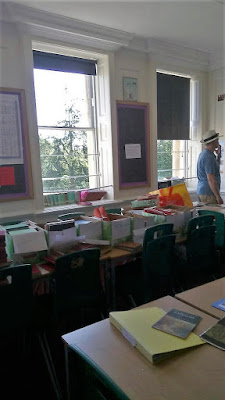 Room 7. Our form room in the fifth year. The desk on which my friend Liz wrote Marc Bolan is dead is no longer there. 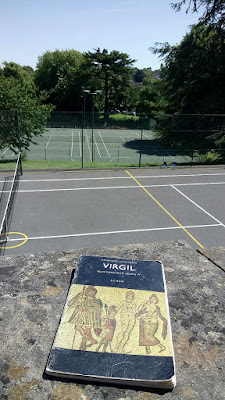 But one of my Latin textbooks is. 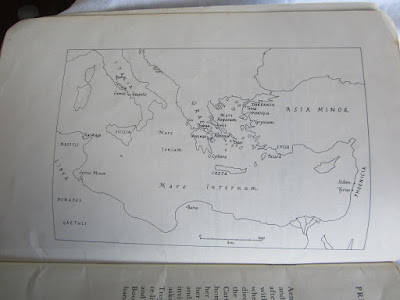 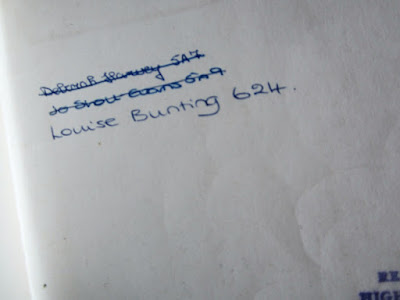 It is 1978 and I am 16. My writing is very neat and very small because I am trying to take up as little room as possible. And I am about to make a mistake that will wrongfoot me for decades.


All I've wanted to do, since I was five, is be a writer. I've been told by my father that I'll never earn enough money to live on, but in my dreams at least, I'm standing firm. 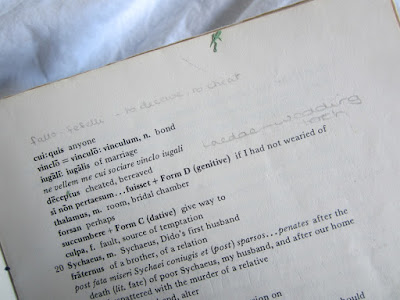 ←
Not my pencilled note

Anyway, I pass my mock O-levels in English language and English literature with As in each, and I'm itching to find out which books will be on the English A-level syllabus, but when I go to register for the course, Mrs B-----, the English teacher in charge, tells me I can't because I'm not good enough. 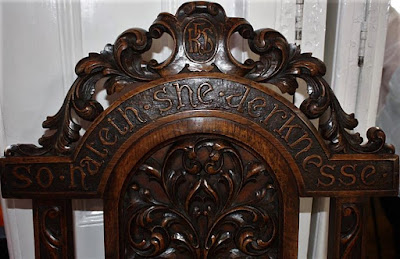 I am so stunned I can't speak. I walk the three miles home - because if I do, I can keep the 10p bus fare - and tell my parents, longing for them to march on the great house with flaming torches to right this wrong, but they haven't read the same novels as me and they just say 'You'll have to do something else then.'

In the Sixth Form we're still obliged to take a couple of lessons in English every week, and at half term the teacher, Miss Meade, says 'Deborah, why on earth aren't you taking English A-level? What made you change your mind?'

I tell her and she looks thunderous for a moment. My heart leaps. 'So - am I good enough? Can I do it, please?'

'No, it's far too late, I'm afraid,' she says. 'They're already on their second text. You'd never catch up.' 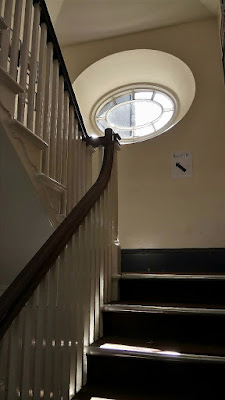 For two years I watch my friends who are Taking English. I feel deeply ashamed that I'm not amongst them. When I can afford it, I buy the same editions of the books they are studying but I don't read them, I just put them on my bookcase. I pass three A-levels in French, German and Latin and an S-level in French with flying colours, but can only be persuaded, by my deeply irritated father, to apply for university at the very last moment, because what is the point when the only subject I want to study is English?

I pass my degree in Russian and German. I get a 2:1 though it's hard work because I only took up German in the sixth form and Russian at university itself. Looking back, it's as if I've tried to make things as difficult for myself as possible to prove my teacher right and lose the sense of living the wrong life, but I can't even manage that. And although I'd once harboured dreams of studying for a doctorate, I vow never to write another essay. 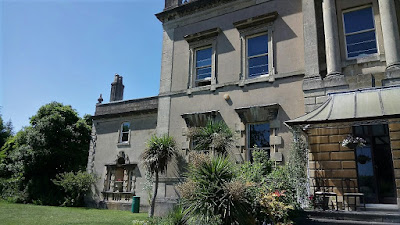 By now I am an entrenched socialist. And I develop a visceral dislike of Georgian architecture.

So what was that all about then? I wasn't a dull scholar. I wasn't badly behaved. (I never even got a detention for forgetting my spare pair of socks because I never once forgot them.) And I didn't make a nuisance of myself in class.

Unlike my other friend from Filton who did study English, I didn't have parents who were teachers. Mine were - still are - working class Tories. Maybe the teacher didn't like me or where I came from. Maybe I expressed a view at some point that didn't chime with her sensibilities. Maybe it was one very small, insignificant act of class warfare.

I try not to hold a grudge. But one day I will drive to the small town of B----- in Norfolk that bears her name, pick up a stone from the side of the road, drive the 15.3 miles to Lowestoft and lob it into the sea with a muttered imprecation.

If I hadn't gone to the university I did, I wouldn't have met my ex-husband and endured a long, debilitating marriage. But equally, I wouldn't have had my four children who work so hard to be the best, most glorious versions of themselves that they can be. And I might not have four books to my name. At the very least I'd have less to write about. 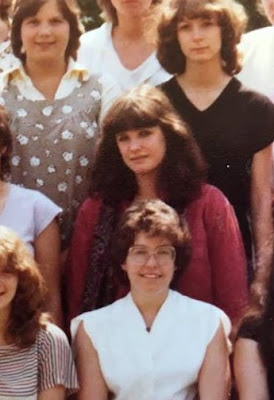 I don't know what to say to the me in this photo, 18 now and already on the wrong road. That maybe it will turn out to be the right road all along? But just a longer journey than you think.

Posted by Deborah Harvey Poetry at 21:10