A Poem For National Poetry Day 2015

It's National Poetry Day today and the theme is light, so naturally I've chosen to post a poem about death and foxes, which has just been published in Hailing Foxes, the beguiling new anthology of illustrated poems newly published by Dru Marland of Gert Macky press.  Except that it's about light also. 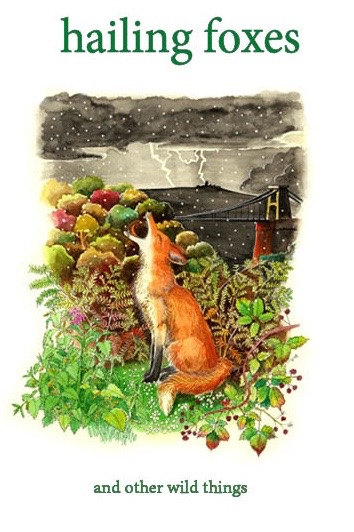 A few months after he died, a literary wake was held for Seamus Heaney in Festival Hall, London. Late that night, on the final leg of the journey home, I had an extraordinary encounter.

All year
from winter to autumn I see them
most evenings

on high streets, down side-roads
slipping through hedges
under the bunting of parked cars,
charcoal running stitches
hemming the edge of dark.  In April
vixens trail their kits
like knots
in hankies

Come September
flashes of amber – intermittent –
a youngster, trapped by headlights
panics on Southmead Road
spins in indecision,
his current short-circuiting, every nerve and instinct
scrambled

After the wake
and the long drive back,
two miles from home and my bed
the stupor in my head gives way to quick
anticipation

a dog-fox on Horfield Common
in Belisha beacon glare
waits for me to brake, trots over the crossing
with a twitch of his white-tipped tail. If I could
touch his fur, sparks would
jump and crackle
my spirits kindled by this sight,
this flaring matchstick
to hold against the night

My next poetry collection, Breadcrumbs, is due to be published by Indigo Dreams in 2016. This poem isn't in it.

Posted by Deborah Harvey Poetry at 06:00