The first jaunt of the New Year began with a fabulous picture painted by Dru Marland, of the Church of Saint Ishow (or Issui) at Partrishow in Powys, Wales. 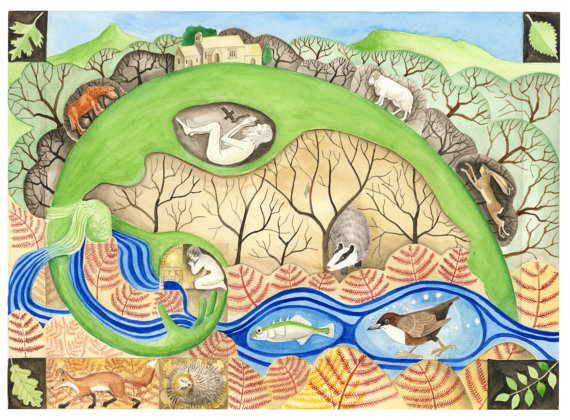 I fell in love with it at first sight and emailed a jpeg to my publisher, Ronnie Goodyer of Indigo Dreams. He replied that he used to live near there last century and often walked his dogs (seven border collies, if memory serves) in the valley.  He also sent a couple of verses of a poem he'd written about the church with its miraculously surviving rood screen.  The next day at Bristol Can Openers in its new venue of Foyle's, our guest, Graham Harthill, mentioned that he lived in the same area of Wales so I showed him the picture and he revealed that he had written several poems about this place I'd never heard of until a day or two earlier. 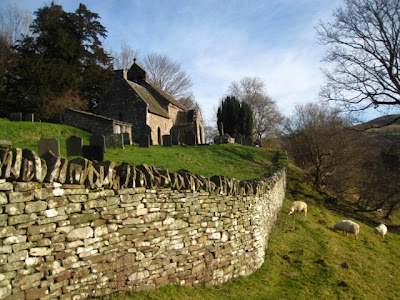 All this synchronicity led me to deduce that the picture is, in fact, a map, and so a date for a jaunt was set with Dru and Bristol poet John Terry*.  Before I went, I even wrote a poem, which is strange because usually I like to dabble my toes in the waters of a place before turning my mind to writing.  I called the poem 'Map Reading for Beginners'. 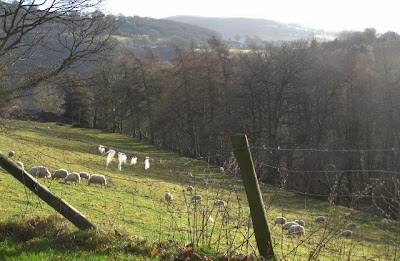 We had the most beautiful winter day for our journey, underlined by the sight of mist filling the Usk valley at Abergavenny.  We parked near the holy well and climbed the last steep part of the hill, as seemed appropriate for a pilgrimage.  The views across the valley were at once majestic and homely, with sheep having left their washing on the line. 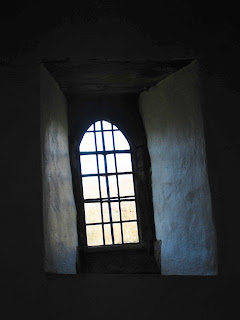 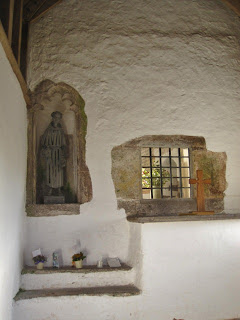 Our first stop was the eglwys-y-bedd - or Church of the Grave - now a shrine to the Martyr Ishaw who is said to have been murdered by an ungrateful traveller at the Holy Well. Its considerable age is indicated by the most marvellously wonky window.  I also loved the graveslab of Elizabeth, the daughter of Thomas Sanders, who died the 9th day of December 1770 aged 28, because the smily angel at the foot is holding its wings in the shape of a heart. 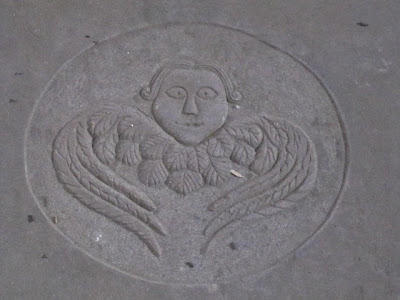 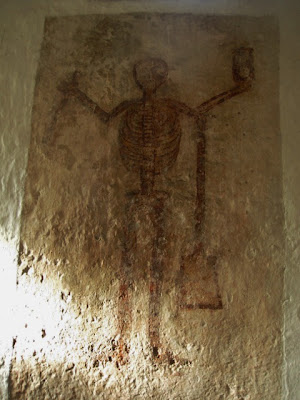 There are so many surviving treasures in the Church itself that it is almost impossible to know where to start. Yes, I could see the astonishingly beautiful rood screen, but there in the corner, shouting his head off, was mediaeval Death (or Doom), appropriately brandishing a scythe and egg-timer, and also a rather splendid shovel.  So he got my attention first. 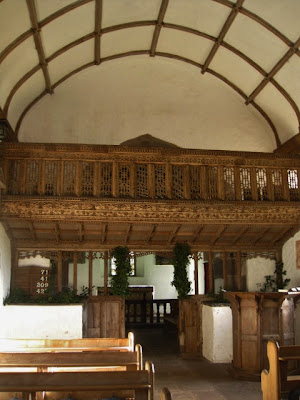 Ah, but the rood screen ... so intricately carved yet so plain in its unvarnished, unpainted simplicity!  Being 16th century, it would have been modern when King Henry VIII destroyed the monasteries and his son's vandals carried out their Cultural Revolution, yet it survived both of them.  It survived the zealotry of the Roundheads.  It survived the depredations of Victorian 'restoration'.  I hope it can even survive my rubbish photography so you can get some idea of just how astounding it is.   Some of the ivy that had decorated the church over Christmas was still in place, giving the impression that to step through the opening was to enter a fairy-tale forest or Narnia. There were even dragons there. 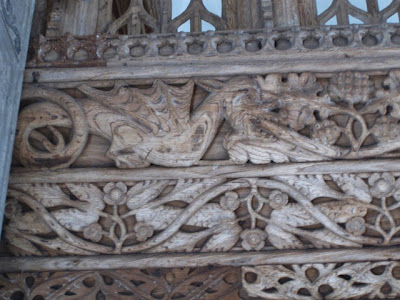 Beyond, a simple, light-filled chancel, with 18th century memorials featuring blowsy angels which could have been designed by Beryl Cook and a small print of William Holman Hunt's 'Light of the World', which echoed the Edwardian lantern atop the shaft of the mediaeval cross outside in the churchyard. 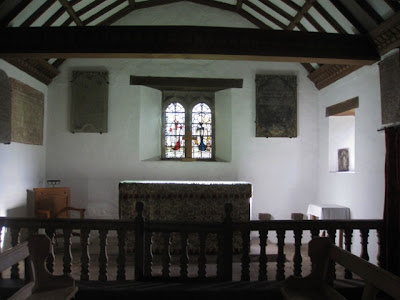 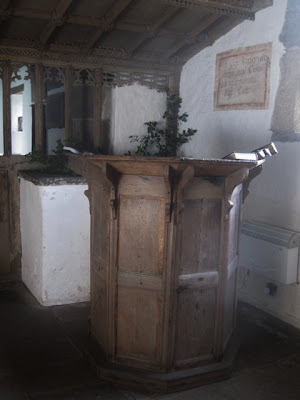 There is so much here to delight that I could write reams. Already I'm going to have to divide the trip into several blogs.  So I'll just concentrate on the treasures which delighted me most and if I miss out something spectacular, like the rare 1620 Welsh bible or the plain and perfectly designed pulpit, then I apologise. 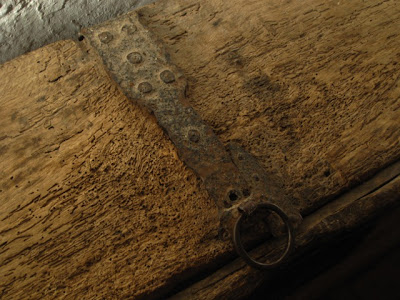 This is the central lock on the parish chest which, unusually, is hollowed out of a tree trunk. 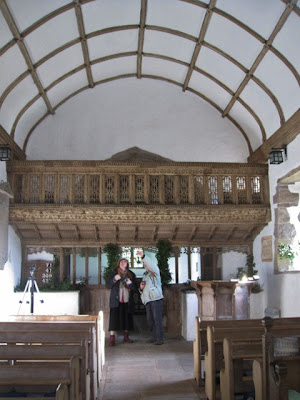 John and Dru in the nave. 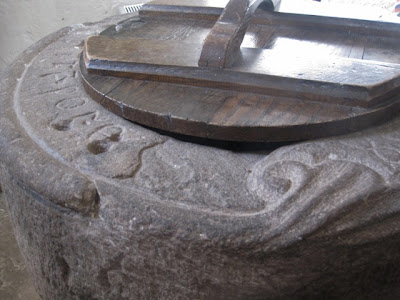 One of the oldest fonts in Wales with an inscription of c1055. 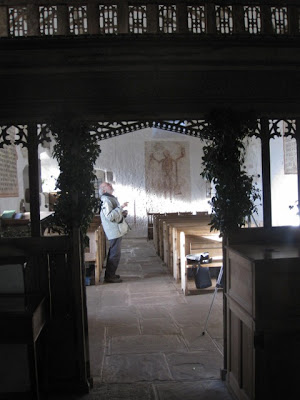 John studying the murals in the nave. 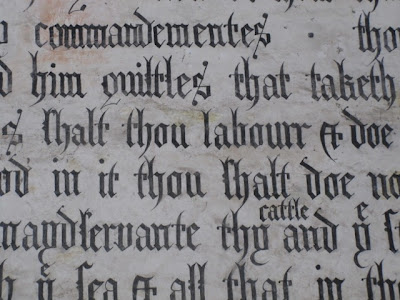 *Note to anyone who doesn't know him: this is the John Terry, not the footballer, obviously.

Posted by Deborah Harvey Poetry at 11:20