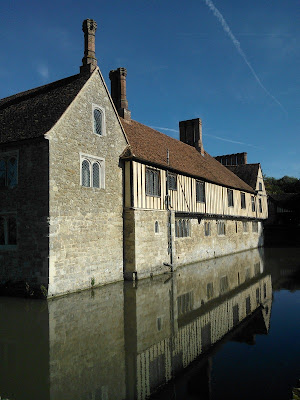 After an excellent gig the preceding evening in the company of Woody Guthrie - via Will Kaufman and Reg Meuross - I felt as if I were bound for glory yesterday morning as I drove up the M4 first thing, the sun rising over the horizon and the fields filled with dragon's breath.  Then, as we left the West Country, the mist became murk and I remembered that actually I was heading for Maidstone to drop Son the Elder off to see his beloved robots in action and the forecast promised driving rain.  (That's why it's called 'driving rain', because it always falls when you have miles to drive before you sleep.)  But by the time I reached my destination - Ightham Mote, near Sevenoaks - it was glorious again and that was just the weather.  What a house! 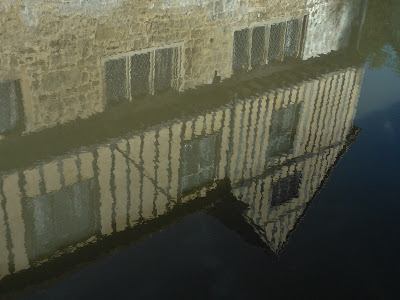 'It's stripey, like a tiger,' announced one tot as his dad pushed him along.  And it was, except that 'like a quagga' would have been more accurate.  Some bits are stripey, some aren't. Some are 14th century stripey, others - ie the South face - 1904 stripey and 'fake' except that the National Trust decided that pretend modern  stripey is as valid a part of the house's history as genuine ancient stripey and so preserved it when they carried out their 10 million pound renovation of the property between 1989 and 2004. Which is excellent.  In fact, it is moments like these when I feel inclined to forgive the Trust even their pot pourri and trowels covered in Morris and Co fabric designs, for crying out loud. (Well, actually, no, not the latter, but if the pot pourri has cinnamon sticks in, it might be OK.) 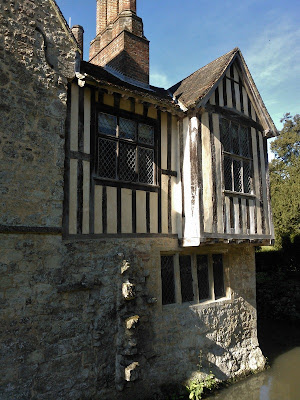 Before entering the house - which I'd wanted to visit for decades, and which for many years I thought I would never see - I had a good wander around outside.  It was so romantic!  I loved these bricks, like a sort of crude ladder up the wall to the mullioned window. Was it a secret way for a lover to get in and out, I wondered, thinking fondly of Romeo and Juliet.  However, the explanation when I discovered it was rather more prosaic.   Ightham is very unusual because it has a free-flowing moat, fed by an underground stream which eventually debouches into the Thames.  The moat was not constructed principally for defensive reasons, however.  No, it was a sewerage system, and the bricks are the remains of the garderobes.  Pity any poor bugger - or should I say, shithead - making the same assumption as me, then! 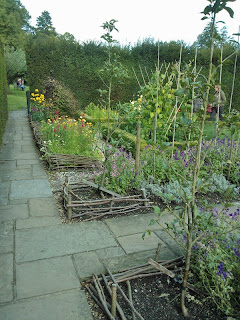 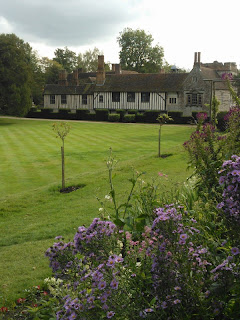 The grounds are lovely too, with ancient outbuildings turned into cottages, a formal garden, an orchard, stew ponds, a cuttings garden and so on.   Postcards in the shop showed that the orchard in spring is a mass of daffodils. 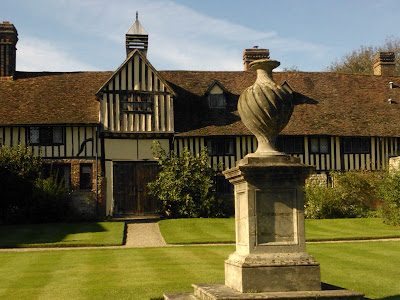 Inside the courtyard, the exquisiosity continues in the eclectic nature of the building work that make the house look as if it has sprouted somewhat eccentrically rather than been added to. 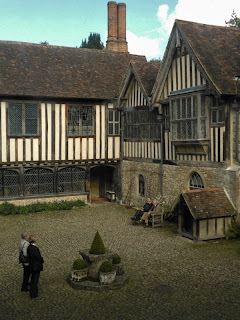 The topiary feature was originally the well-head, and the kennel is the only Grade 1 listed kennel in the country, apparently. 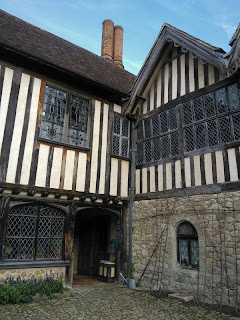 This picture shows the outside of one of the windows in the New Chapel. 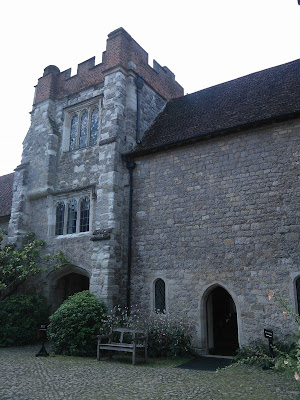 The West Range with the entrance tower, the lower part of which dates from 1330-40, the upper floors from the early 16th century.
There are lots of cool stories about the house, so more about them another time. 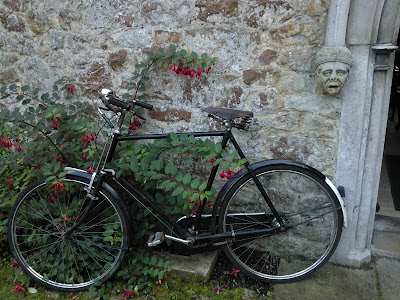 Posted by Deborah Harvey Poetry at 16:03