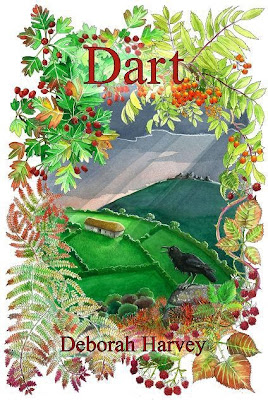 This story is so real, you’ll want to take the characters down to Millets to buy them waterproof jackets and boots.

Swine flu … avian flu … SARS …  We are frequently warned of imminent, drug-resistant pandemics. But what is it really like to wait for the end of the world?

Dart, Deborah Harvey’s lyrical yet unflinching portrayal of life on Dartmoor during the winter of 1348-49, takes the reader back to a time when half the population of the British Isles was struck down by the Black Death and the only remedies were prayer … and witchcraft.

Tobias Hext is in love with Beatrice and if his sister, Kat, is to be believed, the feeling’s mutual. But in nearby Tavystoke, the townsfolk are dying of some terrible fever, and it’s creeping ever closer to their village, thanks to the illicit activities of their neighbour, the villainous Serlo Crake.  And then there’s the witch, Isabella, and her strange stone arrowhead. Will it bring good fortune or be the death of them all?

‘Will it spread further?’ he asked. ‘Is nowhere out of harm’s way? And what do you mean by fog? What’s that got to do with it?’

The witch stopped chopping parsnips and put down her knife. ‘This plague’ she began, ‘it’s – well, think of it as a poison cloud. Like a moor mist that drifts in out of the blue. Except this one can’t be seen. You can only tell where it goes by the havoc it wreaks.’ Then, before he could speak, she gripped his arm so hard that the beds of her nails went white. ‘Tell me, Tobias, what do you do when the black mist’s upon you?’ 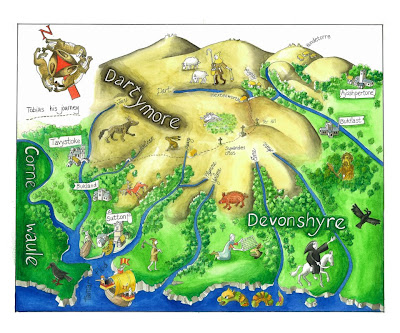 Again his skin prickles. He stops walking and turns, half-expecting to see someone behind them on the track. A pedlar, perhaps, making his way back from market, or a drover – just like him and his father – who’s herded the last of the sheep down from their summer grazing and is hastening home before dusk. But although he scours the landscape, there’s no sign of anyone. Maybe a thief then – or a band of robbers in the ruins amongst the gorse! He grips the handle of his knife, his heart quickening. Everyone’s heard of them – outlaws to a man – who spring attacks on farms and hamlets, slaughtering the locals and looting what little they have. Except that doesn’t seem likely either, not here in Hundetorre.  Burnt out and deserted for as long as he can remember, there are no pickings for anyone, not even crows.
Yet he can’t shake off the feeling he’s being watched, and if not by mortal gaze then by something wisht. It’s All-Hallow-E’en, after all – the night the dead rise from their graves and the Devil himself stalks the tors. And that means he’d do well to hurry home. But before he sets off again, he pulls his hood right down over his face. If it is a spirit – a slithering, soul-sucking Summat – he’d best disguise himself. Frittenings eat with their eyes. The less they recognise of their quarry the better. And the last thing he wants is to end up like the fool in a story, the one who ignores all warnings and comes to a sorry end –
‘Jevan! Get a move on! It’ll be dark before long!’
The boy starts. His father’s voice is distant. He’ll have to run to catch him up. Yet a lingering curiosity fetters his feet. He holds his breath. There it is again – that scratchetty sound, faint yet persistent. It’s like rats in an outhouse or cupboard – a knot of vipers rustling in leaves – a spider scuttling over the skin of somebody sleeping.
But when he tracks the noise back to its source, it’s no more than the scraping of stick upon stone. Not any stone, though – and not any old wood either. It’s the leafless branch of an overgrown rowan, clawing at the lintel of a fallen house like the withered hand of a corpse. And although the wind has dropped, Jevan shivers as he quickly turns away. Rowans are magical trees, planted at every door to ward off ill fortune. And that proves what he’s long suspected – that whatever disaster befell this village, it was something untoward. For why else would a lucky charm stand guard over such devastation?

His question hounds him all the way home and into the night. Even the games he plays with the other villagers and the meal they share can’t take his mind off it, and later still, when he stares into the fire, he sees wreckage in the embers of crumbling dwellings. All that work gone up in smoke, all those hopes and dreams in ashes …
He drags his gaze from the flames. ‘You’ve never told us what happened,’ he says to his father, who has just finished telling a story about Bolster the giant and is wetting his throat with cider. ‘At Hundetorre, I mean. It must have been summat bad – people would never have upped and left otherwise.’ He pauses. ‘Last time I asked you said you tell us when we were older. And now we are.’
His father doesn’t move – in fact, he seems to have turned to stone, his pot halfway to his mouth. ‘I – I cry you mercy,’ he says at last, ‘but some tales are harder to tell than others.’
There’s a change in the way he’s speaking. The words are sticking like burs in his throat, and he takes another gulp of his drink as if to help him spit them out. ‘And once heard, a story can never be taken back.’
Jevan folds his arms with a frown. Although he can’t always see what the fuss is about, it’s a fact that his father is a champion teller of tales, the most celebrated on the moor. He can always pluck a thread of memory and weave it into a yarn. So for him to reject a challenge – well, it’s unthinkable!
‘Tell you what, let’s have a song instead,’ his father suggests, picking up his pipe and raising it to his lips.
There’s a murmur of agreement at this but Jevan’s determined. ‘If you won’t tell me,’ he says, ‘I’ll find someone who will! You can’t keep it a secret forever.’
In the charged silence that follows, dark shadows come crowding in. Jevan glances around at the others – his younger sister wide-eyed, sitting with the other children, his mother and grandmother, all their neighbours looking anywhere but at him. Then his father sighs.
‘I suppose it’s time you young ones heard it. But I only know so much. There were rumours, of course – that was all we had to go on in them days. But I doubt there’s anyone still alive knows what happened for certain.’
His mother tucks her tumbling dark hair behind her ear. She looks as if she’s about to interrupt but the storyteller raises his hand. ‘So,’ he says. ‘Hundetorre was once a thriving village. Several families lived there – decent, hard-working folk they were. I knew some of the lads quite well. We’d have a laugh and a joke whenever we saw each other. Even kicked a ball about with them once, till our dad cuffed me round the ear for not minding the sheep. But that was before we were penned up in this valley, loath to stray for fear of pestilence – the Great Mortality, as it was known. And by the time it was safe to venture out again, Hundetorre was home only to ghosts.’
Jevan studies his face. It too is haunted. Whatever happened to those folk down the way affected him as well, but before he can ask how, his sister takes her thumb from her mouth.
‘Who’s Pesty Lance?’ she demands, squeezing between them. ‘And Great Mort Allity when he’s at home? Are they giants like old Bolster or Gogmagog and his screaming stone?’
Before Jevan can nudge her, their father intervenes. ‘A good question,’ he says, lifting her onto his lap. ‘Stories should always start at their beginning.’ He clears his throat. ‘The Great Mortality was the name folk gave to the plague when first it came amongst us some twenty years ago. Hundetorre was harder hit than most, so they say, though nowhere escaped it.’
‘What, not even Hextenworth? Out here, aback of beyond?’ Jevan leans forward. ‘But if it were as bad as that, how come you’ve never told of it till now?’
His father bows his head and for a long time he is still although his thoughts are in turmoil. Only when he’s sure he’s mastered them does he look up, but instead of Jevan’s enquiring gaze, he beholds the nightmare he’s failed to forget, coming closer and closer towards him, lips moving, oozing pus, its mouth a crater in a face already shrunken to the bone. And in its arms the heap of swaddling clutched to its mottled, rotting breast … Don’t look at it! Don’t look! … but he can feel its fingers on the back of his neck, forcing his head down, shoving the grubby bundle up. And he presses his fists into his eyeballs so clouds of darkness will blot it out …
He surfaces, gasping. Everyone is watching, patiently waiting for him to speak. The storyteller looks around at them and as his glance meets theirs, he knows what he has to do. He has to tell it – to find the words to turn terror into a story. It’s the only way they’ll ever break its hold.
He takes another mouthful of cider and sets down the pot. Then, drawing breath, he begins...

Buy Dart now to read the rest of this tale ...