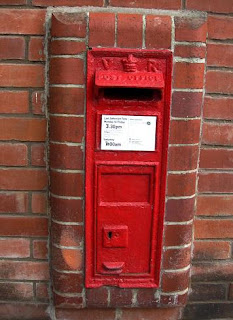 It’s usually the case that my poems continue to evolve long after I think they’re finished.  I often find myself revisiting weeks or months later to tweak the odd word or line, even if they’ve been published.  Today, though, was the first time I’ve been assailed by a far more fitting turn of phrase before the envelope containing my competition entry has hit the bottom of the pillar box.

From slightly manic euphoria at the creation of so pristine a poem I’d felt compelled to submit it ten whole days in advance of the closing date, I plunged into agitation.  Even the scent of blackthorn in the spring sunshine couldn’t distract me from my poetic inadequacy.  So the moment I left work, I returned to the scene of my hubris and waited for the next collection.


In olden times, if it said on the pillar box that this would be at 10am, 12.30pm, 3.30pm and 5pm, that’s precisely what happened.  These days they put a final posting time which doesn’t necessarily bear any correlation whatsoever to when the postman will arrive.  Thus I lounged against a nearby wall, affecting nonchalance, for 35 minutes until a scarlet van came bowling up the hill.

Not that I’m going to slag the Royal Mail off, as the postman in question found my predicament highly amusing and duly handed the envelope over (once I’d described it to his satisfaction).  Now, though, my poem seems – well, a bit crap.  Doubtless I’ll be resubmitting it at the very last moment, as usual …

Posted by Deborah Harvey Poetry at 00:42